Sircar came down hard on governments of the past and present for reducing funds and obliterating posts in the culture sector. 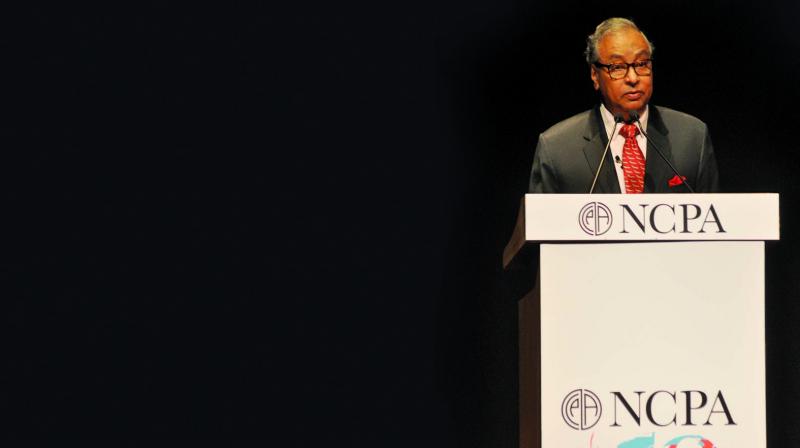 The city of Mumbai holds many concrete gems, steeped in history. And one such culturally significant building is The National Centre for the Performing Arts (NCPA), which famously exists because of the largesse and artistic inclination of its founder, Dr. Jamshed J Bhabha. On his 106th birth anniversary on August 21st, the NCPA kicked off ‘The Jamshed Bhabha Memorial Lectures’, a commemorative lecture series set to be held every year on his birthday.

The inaugural lecture held on Wednesday had as its speaker former Culture Secretary and ex-CEO of Prasar Bharati, Jawhar Sircar. The lecture commenced with NCPA Chairman, Khushroo Suntook remembering Jamshed J Bhabha’s “generosity, vision and leadership” and calling him an “extraordinary man, and an example to us all.” The dais was then taken over by Sircar, who minced no words when answering the question of the evening, ‘What ails the arts in India?’

His quest for answering the question saw him sift through decades of Indian art history, with his magnifying glass resting on moments, figures and discoveries of importance. But this also brought into focus areas in need of repair and rejuvenation, like our historical temper. Sircar lamented the fact that, until about 70 to 80 years ago, most Indians were clueless about archaeologically significant sites of our country.

In fact, a lot of our knowledge comes from finds made by Englishmen, like James Prinsep, who deciphered the old Brahmi and Kharoshti scripts and Alexander Cunningham, who conducted excavations at Sarnath and Sanchi. He laments the fact that the masses still cannot make sense of history because of poor signage and communication in museums and other cultural institutions.

Sircar also came down hard on governments of the past and present for reducing funds and obliterating key posts in the culture sector. “Half the posts of every museum are vacant. Last month, 100 posts of curators and others in the National Museum were wiped off,” he thundered and pointed out how a lack of funding leads to a dearth of state-of-the-art performance complexes, which in turn impacts opportunities for cultural exchange with neighbouring countries.

The former Culture Secretary aired his views on the retrograde ‘Antiquities and Art Treasures Act, 1972’ as well and slammed it for inhibiting the movement of antiquities within the country, and into museums. “So many artworks are hidden by families and ex-aristocrats; they’re dying impoverished rather than face a bureaucracy,” he said and added that the striking down of the Act could boost the economy, which seems to be in doldrums at the moment. Sircar also decried the manner in which our archives are treated, as there aren’t sufficient systems in place to preserve and conserve them.

The lecture served as a cautionary tale, as while touching upon the highpoints in Indian art history, Sircar also pointed out how all art forms, whether it’s Indian classical music, classical dance or theatre has metamorphosed over time to suit contemporary narratives. One needs to acknowledge this fact, in order to view our artistic traditions in a neutral and realistic light. “It’s in the 1930s that revolutionary change happened; classical dance was reinvented to suit the front-facing proscenium stage…most of India’s classical music was regenerated in the 18th and 19th century – nothing is eternal,” he said, and added, “To think that everything in ancient India was superior to the rest of the world is dangerous.”

Sircar also drove home the need for tolerance and acceptance when it comes to diversity, and spoke about India’s thriving regional theatre scene as an example. “There isn’t one national theatre, but many regional theatres. Any attempt to foist one language over others will be retrograde,” he said. He asked the audience to be wary about statements labelling Western classical music un-Indian and pointed out how some of the country’s brightest minds like Homi Bhabha and Satyajit Ray loved the genre.

In his concluding remarks, Sircar made a plea to the billionaires of the city and asked them to draw inspiration from people like Andrew Carnegie, Cornelius Vanderbilt and Solomon Guggenheim, who’ve made indelible contributions to the artistic world. “These names are embedded in public minds across the world because of their philanthropy. To those God has given more, consider this seriously: If you have even the slightest desire to remain immortal, it can happen through the creation of cultural foundations,” he said.

Tags: the national centre for the performing arts, jawhar sircar