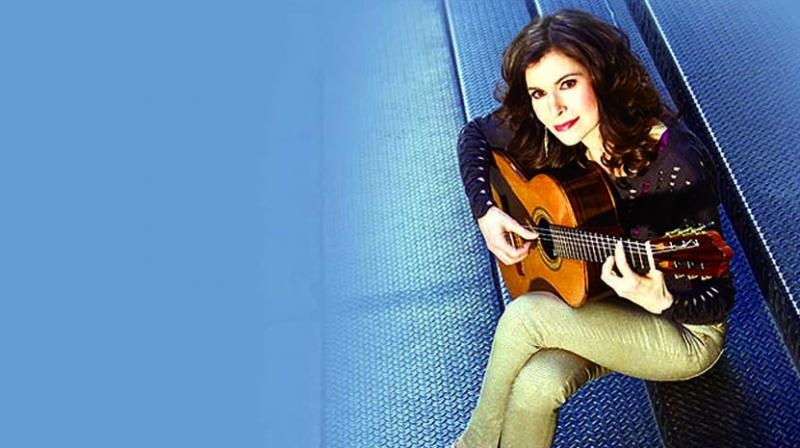 An open-minded, eager to grow and ready to explore new vistas, the groundbreaking American guitarist Sharon Isbin broke the glass ceiling - for guitar as well as women, when for the first time in 28 years she won the Grammy award in 2001 for Dreams of a World. She is the only female guitarist who has ever been awarded the one.

“I’ve enjoyed breaking the glass ceiling in the classical guitar profession so women can prosper and flourish,” says Sharon while adding that she still aspires to make beautiful music for years to come. While for some awards are the responsibility and a matter of pride, for Sharon they are a key to open new doors. “Awards can open doors and invite new collaborations and opportunities. I am looking forward to recording this fall some exciting collaborations in India and abroad,” adds Sharon who will be collaborating with Indian musicians for an event titled Peace Tribe – an international music collaboration aiming to go beyond borders and age barriers.

For the event, the guitarist would be seen teaming up with Indian veterans of strings like Ayaan and Amaan Ali Bangesh, Vijay Ghate and Mrindangam genius Sridhar Parthasarathy. When asked about this association, Sharon recalls her fondness for Indian music since her teenage years. “I am thrilled to have this magical opportunity to participate as a performer. In my 48 years of career, I have enjoyed inspiring rehearsals and a lovely evening at the home of Amjad Ali Khan and his wife,” recalls the guitarist.

About her performance in the city, Sharon confirms that the audience will experience the world premiere of masterful works composed by Amjad Ali Khan that interweave Indian and Western classical traditions in expressing passion, feeling and beauty.

In her stellar career, Sharon has performed in the finest music halls across the world from Wigmore Hall in England, Concertgebouw in Amsterdam to Carnegie Hall, Boston Symphony Hall and Avery Fisher Hall in her home country US. Trained by some of the finest music instructors, Sharon has learnt to get nuances out of the classical guitar and advancing the instrument than any other living guitarist in almost four decades of her musical journey. “Passion, sensitivity, creativity, rhythm, lyricism, timbral colours, and virtuosity are some of the traits that I have possessed throughout, she says, suggesting that these are the utmost required qualities for any good guitarist. But does she find any difference in musical practices across the world, she says, “Music unites and expresses our shared humanity.”

Though Sharon has made her musical appearances on multiple stages for her live performances,  and film compositions, where she has solely participated with her guitar, she observes a difference between both the platforms. Says Sharon, while music rhythm in live concerts is more influenced by the audiences, it is drawn by the story in the film. The guitarist further notes that the music industry has turned more commercial over the years. “The industry has often become more interested in promoting surface glitz than artistic depth,” rues the artist.

When asked about her greatest challenge as a guitarist, she laughingly blames the fact that there are only 24 hours in a day, “which never feels like enough.”