Netizens and BJP leaders, took the opportunity to mock and troll the entire episode. 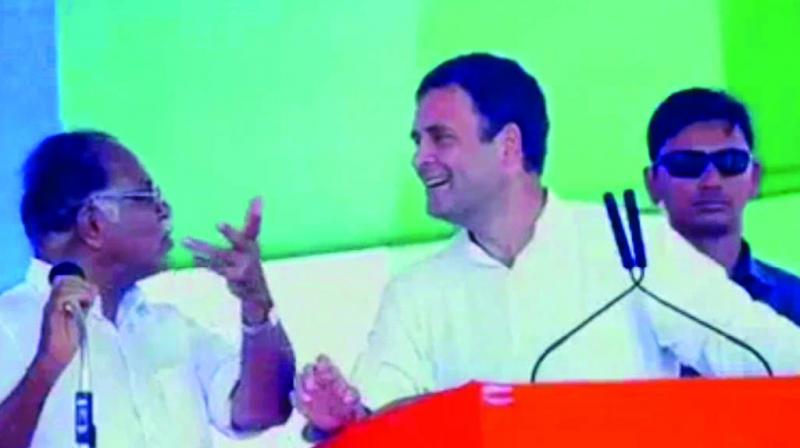 What are you saying?: Rahul Gandhi seems to tell PJ Kurien who was translating the former’s speech at a recent election rally.

Few days ago, at an election rally in Pathanamthitta, Kerala, Congress president Rahul Gandhi was addressing a huge gathering. Though he launched a spirited attack against Prime Minister Narendra Modi, with his passionate speech, the audience remained unmoved! Reason? The speech in English was translated in the local language by the senior party leader P.J. Kurien, whose interpretation skills left a lot to be desired. At times he was nothing short of a joke!

For instance, when Rahul promised to deposit Rs 72,000 into the accounts of impoverished individuals, Kurien translated his promise to

Rs 72,000 crore! Kurien, however, very conveniently blamed the technical snags and the echo. Rahul was visibly annoyed, and though he wanted him replaced by a more competent translator, he reconciled graciously and went on to complete his speech with a smile.

Netizens and BJP leaders, took the opportunity to mock and troll the entire episode.

Reportedly, Rahul has faced similar issues on several occasions in the past when Congress leaders have translated his speeches incorrectly.

Chief spokesperson of the Telangana Pradesh Congress Committee (TPCC) Dasoju Sravan, who translated Sonia Gandhi’s public speech in the recently concluded Telangana Assembly elections, is of the opinion that a translator should convey the intent and not the content; the emotion and not necessarily the literal meaning of speech. “It is very challenging to translate and convey messages correctly.”

A translator could get lost due to the high frequency of the woofers, echoes and the noise coming from the crowd. If mics and speakers are a problem, then a translator cannot even hear his own speech, as in the case of Kurien garu,” he said.

Apparently, it is not unusual for Hindi-speaking politicians to find it challenging to connect with the people in non-Hindi speaking states. For example, translating Prime Minister Narendra Modi’s speech at a party’s public meeting which was held in Thrissur in 2015 turned into a nightmare for the BJP leader K. Surendran. When the PM said that he regretted being late to visit Kerala, Surendran translated his statement as “I am so happy to be here right now.” Surendran further even omitted what the PM shared about his initial plan according to which, he was to begin his trip with a visit to Sabarimala.

Similarly, BJP chief Amit Shah was caught in an embarrassing situation after his translator goofed up at a campaign rally during Karnataka elections last year. While Shah said, “Siddaramaiah’s government has failed to develop Karnataka. The upcoming BJP government in Karnataka will work towards the welfare of the Tribal communities and upliftment of the poor’,” MP Prahlad Joshi translated his statement as “PM Narendra Modi is anti-Dalit and will destroy the nation.”

However, the National General - Secretary P. Muralidhar Rao argues that such errors are not deliberate. “Translators do not misinterpret intentionally. It just happens. Moreover, translating political speeches is very difficult, and we hope that such slips don’t project the party in negative light,” he said. Political observers state that translating political speeches is an art and that bad translation is like a body without a spirit. They argue that if political parties recruit professional translators (instead of local leaders), then such goof-ups can be avoided. “It can cause a fair amount of insult to party leaders if their translators miscommunicate their ideas. It is ideal that a translator communicates exactly what the party leader intends to communicate,” said the political analyst V. Prakash.