Painting outside the lines

Two Mumbaikars have breathed new life into rusty, handcart-drawn water tankers by painting quirky messages and iconic dialogues on them. 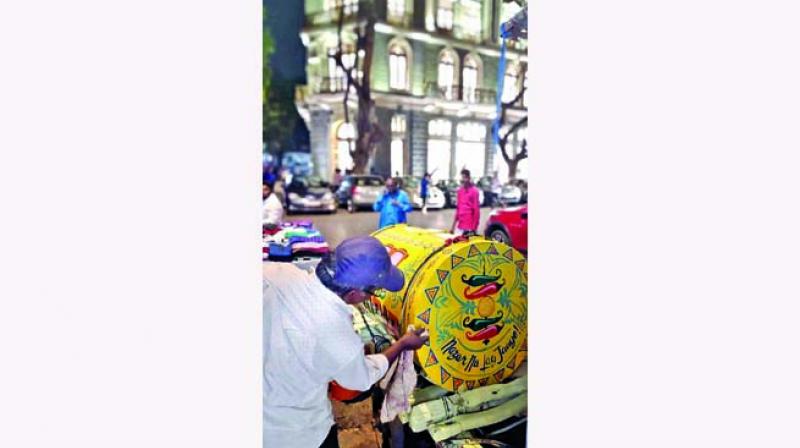 Kamal, a local artist who paints signage on trucks and shop signboards, was roped in to lend his skill to the project.

If you take a stroll around SoBo’s Fort area, you might chance upon colourful water tanks with quirky messages, being pushed around on handcarts. And if the whimsical imagery puts a smile on your face, you have Muhammad Ally and Dev Sanghvi, partners at the urban ‘tapri’ Raju Ki Chai, to thank for it. The duo was eager to spruce up the neighbourhood they spend their entire day in and so, turned their attention to these dusty, rusty hand-pulled water tanks that often go unnoticed by many.

Talking about how the idea to give these water tanks a new lease of life came about, Ally says that it goes back to November 2017, when Raju Ki Chai opened. Outside the shop stood one such patina-covered water tank, which was quite an eyesore, especially to customers. “We decided to get it painted and write something that would be inspiring or make you smile. We wrote, ‘Selfie nahi, kisi ka dard kheech paao, toh koi baat baney,’ on it and people just loved it. They click selfies next to it, which is quite ironical, but it’s a big hit. It also beautified the whole area. This made us think, ‘why not do this for other tanks in Fort?’ It will spread a social message of keeping Mumbai clean,” he shares.

In November 2018, the duo decided to act upon this desire and started approaching the owners of handcarts, to ask if they would allow their water tanks to be painted. And if you thought that not many of these water tank-laden handcarts would be found, you’re wrong. “The Fort area has at least 50 such handcarts,” Ally informs, adding, that they are an important part of Fort because the area has many old buildings that still need water to be supplied to them. “We hoped that by painting these water tanks, Fort would be beautified a bit. But more importantly, we hoped that the funny slogans painted on them would elicit smiles and a few laughs. After all, the area is full of working professionals, especially lawyers who spend long days in court. We thought that this would be a great way to brighten up their day,” says the 38-year-old.

And so, Ally and his partner roped in Kamal, a local artist who paints signage on trucks and shop signboards, to lend his skill to the project. It was also mutually decided that the tanks would be painted bright yellow and that the popular namaskar gesture and the evil-eye destroying nimbu mirchi garlands would grace every water tank. Apart from this, humorous slogans and iconic dialogues like ‘Ae mere humsafar, tu exactly hai kidhar?’, ‘Tension leneka nai, deneka’, ‘Swag se swagat,’ ‘Ja Simran, jee le apni zindagi,’ and many more were painted on the tanks. In all, 12 water tanks have undergone colourful makeovers and the cart-pullers are quite thrilled about their water tanks.

“Initially, quite a few of them had apprehensions about the project. They didn’t want any religious iconography on their tanks and didn’t want to get into trouble with the civic bodies. But, after their tanks were painted, they were absolutely delighted, because even their clients tell them that their tanks look nice,” reveals Ally. He also tells us how these updated tanks help the cart pullers earn a few extra bucks since many like to use the tank as a photo prop. “People on the street interact with them and ask them questions about their quirky water tanks, which goes to show that they are being noticed now,” adds Ally.

Not a penny was charged from the handcart pullers since Kamal's fee was footed by Ally and his partner. And this is why they are now being flooded with requests by other handcart pullers who want their water tanks painted. “Many of them come down to our shop regularly, but we don’t have much of a budget. We’ve exhausted whatever we had on the current set of water tanks. Maybe in the future, when we have spare funds, we’ll try to get some more done,” says Ally.