Having toured seventy countries during its 29 year old history the performance had a handsome audience. 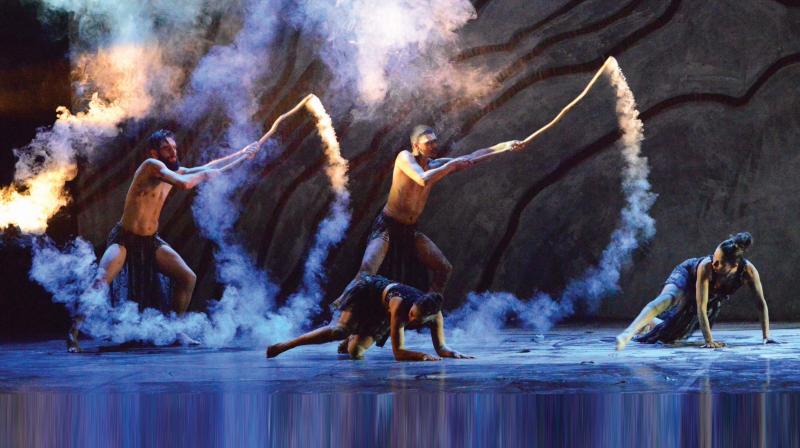 It is heartening to know that with this company’s efforts at artistic recapture of an eventful past, some lost languages are also being revived.

Hailed as one of Australia’s ‘greatest cultural ambassadors,’ heralding the start to the six-month long festival of Australian culture and creativity in India, the Bangarra Dance Theatre, a leading aboriginal and Torres Strait islander organization, could hardly have envisaged a more magical performance space, than the Delhi Qutab Minar gardens with the magnificent tower as a backdrop and a stage canopied by the open skies. For evoking vibes of people so close to nature and open spaces, dancing in an auditorium would not have enabled the same feel of abandon. Having toured seventy countries during its 29 year-old history, the performance at Qutab Gardens of ‘Spirit 2018’, given a handsome audience turnout, marked the 26th international tour for this indigenous performing arts company - its varied troupe of professional dancers with an aboriginal background hailing from all parts of Australia, having earned the Company the prestigious place of permanent residence at the iconic Sydney Opera house.

Curator of many works, the highly acclaimed prestigious artistic director (since 1991) Stephen Page descendant of the Nunukul people and the Munandjali clan of the Yugamben Nation from South East Queensland, has designed ‘Spring 2018’, reclaiming sounds and rhythms of the indigenous Australian past through stories portraying the closeness to nature of these indigenous peoples. Rendered in a high tempo, was a riveting dance theatre amalgam of story telling with a highly inventive musical track where multi-voiced singing of different ancient music genres in local languages of varying dialects was punctuated with telling sounds of nature from a desert to salt waters of the ocean, to strong bird calls or of canines like the Dingo along with diverse percussive rhythms sounding at times like the Indian morsang. Professional to the core, with breathtaking scenic effects, the ‘contemporary’ dance language of the participants, evolved out of the age old indigenous expressions negotiated contemporary compulsions without forsaking their inbuilt identity. Even slowly unfolding movements had the tone of high physicality, often at ground level, or with the standing body with the slightly bent spine with knees bent forward, with the gaits often imitative of animals, with wide leg swivels and sweeps, with huddled figures in groups – all had a distinct character, except in the martial art scenes weaving sticks like swords with legs in a plie with knees turned outwards. Only in one instance, of a male solo in ‘Cocoon’ by Kaine Sultan Babij, an excellent dancer, did one find the bearing very ballet-like (one heard later that he had a ballet background). Moth, with two dancers Tyrel Dulvarie and Yolanda Lowatta, with hands becoming wings, was replete with grace and light -footed leaps. Dingo with ten dancers, showed the strong interconnection of people and animal. ‘Hunting and Gathering’ scenes Black, White, and Yellow – all added up to a constant struggle for existence with the resilient spirit of the aboriginal triumphing. How knowledge is passed on from one generation to the next made another scene. How far the stories in this production, are totally from the oral tradition of aboriginal groups passed on through their elders and communities, undiluted by any contemporary influences, is difficult to say. The clever costuming, scanty enough to suggest primitive peoples, but camouflaged with lighting (not to offend the conservative Indian mindset?) merged with the background as part of a total frame, not making anything stand out.Considering how aboriginals in almost all parts of the world (and it is no different in Australia, where they were given voting rights only recently) have often been relegated to becoming the less favored ‘other’ in their own homeland, taken over by persons from outside, what this dance company has achieved is remarkable, its members able to make a livelihood from just practicing this art form. And one has to appreciate the patronage of the Australian government supporting such enormously expensive tour programmes down the years. The lighting, the stage, the logistics and the meticulous tour programming with community engagement opportunities for the group of dancers, through interacting with indigenous groups in the country visited - thus spreading cultural reciprocity, enabling connectivity amongst peoples of the world is  all to the good.