Teachings of an ascended master 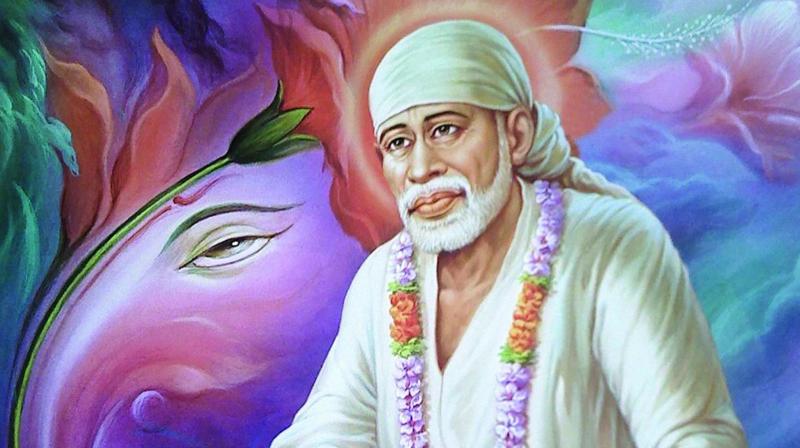 He lived in a mosque, celebrated Ram Navami, had the words Allah Malik on his lips and had the Ram Vijay read out in his final hours.

Saints like Shirdi Sai Baba (considered to be an avatar of Dattatreya) incarnate on the earth every now and then to guide mankind on their spiritual journey. The very epitome of virtue and goodness yet with human foibles for a purpose, he is a guru at whose feet and through whose words (captured in books like Shri Sai Sat Charita) devotees acquired knowledge with experience.

Spotted as a young lad of 16 meditating under a neem tree in Shirdi, he lived the life of an ascetic for one so young — lost in meditation and keeping largely to himself. He disappeared after three years and came back to Shirdi subsequently. His presence aroused a lot of curiosity, awe and skepticism among the villagers. Shirdi Sai Baba performed many miracles — from curing the ill, halting a storm, arresting the spread of cholera by sprinkling the village boundaries with wheat flour and even gave the vision of the Holy prayag by making the waters of the Ganga and Yamuna flow from between his toes.

Was he a Muslim or a Hindu? He lived in a mosque, celebrated Ram Navami with fervour, had the words Allah Malik on his lips and also had the Ram Vijay read out in his final hours. Shirdi Sai Baba had a way of making devotees see whatever image they held close to their faith. A Muslim would see a mosque, a Hindu would see a temple or his chosen deity Lord Ram or Ganesh as the case maybe.

Leading a life of deprivation — he wore a kafni that had several patches and got by with a sack cloth for bedding, he subsisted on food obtained as alms from five houses near the mosque. Whatever he collected on his rounds was put into a huge pot and devotees and animals would be fed from it.

Baba always preached kindness to animals and he taught that whether an animal or a human being crossing our path indicated a previous connection. “Give water to the thirsty, feed the hungry and provide clothes to the unclothed and shelter to the destitute,” he said.

Knowledge without love and devotion was meaningless to Shirdi Sai Baba and he assured devotees that he was eternally enslaved to those who came to him with faith and devotion. It is common knowledge that no one could set foot on his sanctum without his call.

The huge fire dhuni continually burning at Dwarakmayee was also symbolic of consigning to the flames all our negative qualities and to remind us that we all return to ashes one day.

Oneness with the Supreme and meditating on the Atman were important steps he taught. He collected dakshina from his devotees to make them understand the values of non-attachment and renunciation. The two pice that his guru collected from him was to drive home the value of shraddha and sabhuri i.e. faith and patience.

He often tested his devotees like asking a brahmin to slaughter a sick and ailing goat and retracting in the nick of time, and reminding people of forgotten promises in a manner that completely took them by surprise.

Shirdi Sai Baba attained samadhi on 15 October 1918 on the day of Vijayadashami. This is celebrated as Shilangan in some parts of the country on Dussehra and indicates the crossing of the border. It was as if this was the most opportune time for him to shed his mortal coil and merge with the Divine.

The nine coins he gave away to Laxmi Bai Shinde before his passing and which are preserved to this day in her house indicate the nine forms of devotion — shravan (hearing attributes), kirtan  (reciting), smaran (calling to mind and meditating on the names, perfections of), paadsevan (washing feet), archana (outward worship and presenting food offering), vandan (adoration), daasya (service), sakhya (cultivating fellowship) and atma nivedan (consecration of oneself).

Soon after his passing, there raged a huge debate whether he was to be consecrated as per Muslim rites or Hindu rites. But Shirdi Sai Baba had already indicated that he should be taken to the wada and it was indeed fitting that he came to occupy the space reserved for a statue of Murlidhar (Lord Krishna). He had promised devotees that nothing would change after his passing and that he would always look out for them and care for them even if he was not in human form.

The fact that a hundred years after his samadhi (he breathed his last in a sitting posture after a bout of fever), he is remembered so fondly and celebrated by devotees, some of whom have never met him, and that none of his teachings have lost their relevance proves that he had indeed conquered time and space.