She’s ‘Arm’ed to face the future 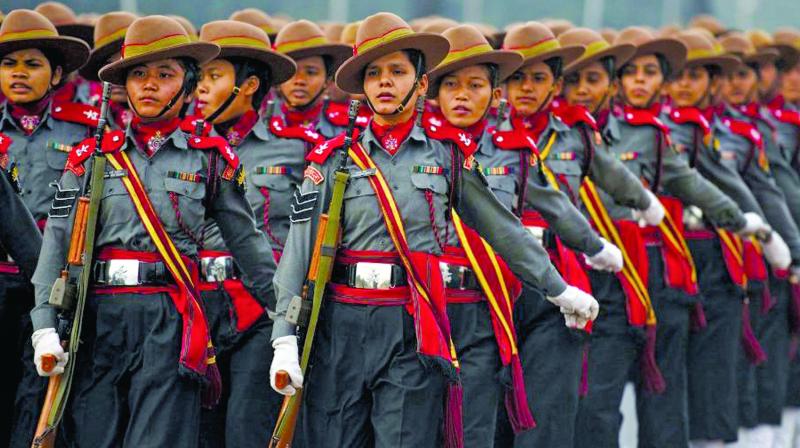 A picture from the Republic Day parade used for representational purpose

After a long wait for women to be permanently commissioned into the forces, the Indian Army has finally opened its ranks to female officers from eight different streams. The Indian Navy and the Indian Air Force were the first to recruit women as cadets. The fields that are now open to women include Signals, Engineering, Army Aviation, Army Air Defence, EME (Electronics & Mechanical Engineering), Army Service Corps, Ordnance Corps, and Intelligence.

The first batch is set to start training from December and by 2021, the first batch of women soldiers will be commissioned. These women will be inducted into the Corps of Military Police of the Indian Army. They aim to induct a hundred women soldiers every year for the next 17 years in order to reach the target of having 1700 women soldiers in the military. Although, these eight streams open up a wide range of opportunities for women who are keen on getting into the forces, ground-based combat missions are still off limits for women.

Rucha Mangesh Kathe, a mechatronics engineer from Bengaluru, says, “Mechatronics is a field that can help soldiers during combat mission, help with their healthcare as well as communications. I used to work with a senior on a project where we built a prosthetic leg for soldiers, one that would get energised with every movement. When we began ideating for this, there were no on-field opportunities for us. From hereon I can take this forward. The idea should not be to bifurcate work based on one’s gender. If more people are coming forward to join the forces then that’s good. There’s no need to look at the gender of these people.”

Varsha MK, an engineer from Bengaluru, talks about how big an announcement like this is, especially for a girl coming from an army background like her. She says, “I think progress like this is going to take gender equality to the next level in India. My mother works as a senior scientific officer for the Indian Army. There have been times when she was denied a transfer back to our city because they chose to transfer a man instead. So, I think with the Army now giving importance to their women employees, such gender hierarchy will change.”

Aeronautical engineer Meghana Narayan Swamy is visibly pleased. “The numbers in which women are moving into this ‘patriarchal profession’ is extremely heartening. In fact, in my batch, we had more girls than guys pursuing education. I’ve always been inspired by the National Geographic videos about the armed forces. It’s very fulfilling to work for the country and give back to the people. As an engineer, I always saw myself working to help soldiers fight easier, safer and stronger. Now that there’s permanent recruitment, I know that I have job security for the future and hence, it’s something I would think about,” she admits.

Instead of being taken on only as medical officers, women can now be recruited as practicing doctors with the Indian Army. Meghna Prakash, a doctoral intern from Bengaluru, says, “For doctors, working for the Indian Army is almost a dream. Helping the soldiers who are keeping us safe and ensuring maximum security is very inspiring. There’s always a demand for more doctors and I think, as the next step, they should include a training programme within the MBBS coaching. The training you require as a doctor for the army is different from the regular sort and if we are given this, more people will be interested in working with the forces. Everyone will have an equal opportunity and the ones with the most interest and best hands will get in. That’s fair and square.”