Frontiers beyond the Form

Mandakini Trivedi works tirelessly to give richness to the Mohini Attam repertoire in every possible way. 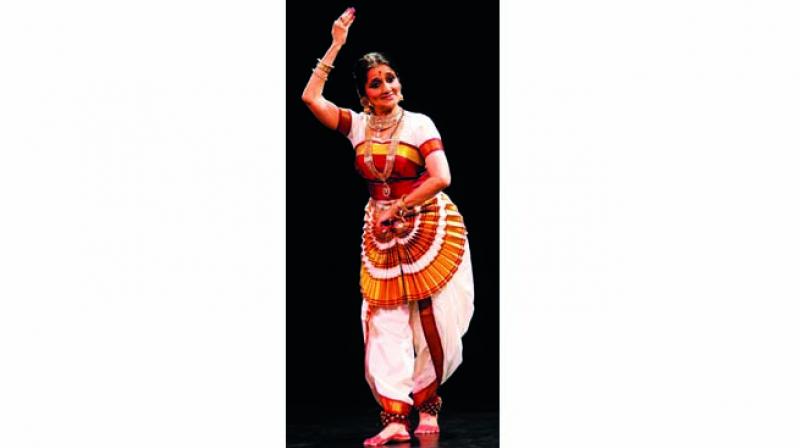 There are some artists who follow the art that they have learnt from there gurus exactly the way they were taught and then there are some who think beyond and try to achieve new horizons,  yet keeping the essence of their art alive. I am talking about one such incredible artist who is not just a fantastic dancer,  but a true performer, choreographer, writer and fabulous teacher:  Mandakini Trivedi

Mandakini  was honoured with the prestigious Sangeet Natak Akademi Puraskar  in 2015 for Mohini Attam. She is a unique dance personality, whose quest for truth through Art has taken her to frontiers beyond the Form.

She holds  a Masters in Fine Art (MFA) in Dance from Mumbai University’s Nalanda Nrityakala Mahavidyalaya and was  trained in Mohini Attam  by Padma Bhushan Dr. Kanak Rele and has also taken master classes in Mohini Attam from  Kalyanikuttiamma,  Kalamandalam Satyabhama  and  Kalamandalam Leelamma.

All through her dance training, Mandakini  was drawn to the undercurrents of spirituality in Indian aesthetics, she was convinced that it was not a mere coincidence, a poetic or mythological exaggeration that Bharata,  the compiler of the Natya Shastra was a muni, that Shiva and all the Gods of the pantheon danced, that the aesthetic experience was compared to the spiritual experience. Neither did she feel that this spiritual background was a matter of history, irrelevant to the times. She pondered deeply on these issues wondering why the professional dance scene was so far away from its original background.

As if in answer to this deep query, she met her spiritual Master, Swami Shri Harish Madhukar ‘Babaji’, a jolly fakir who was not a dancer. But in him she saw the joy that the aestheticians referred to, as the ultimate purpose of art. For many years, she practiced spiritual sadhanas with him, away from the world of professional dancing and understood the deep roots of mysticism and spirituality in art. She understood what sadhana or spiritual discipline really meant! Her performances, choreographies and lecture demonstrations, all became coloured by the fragrance of the Master’s teachings. She realized, there is no difference between art and spirituality. Dance is the highest yoga and art only a means to expand consciousness. This understanding permeated all her work.

Mandakini Trivedi is the recipient of the Central Government Junior Fellowship for research in Mohini Attam, she was also professor of Indian Dance at Nalanda Nrityakala Mahavidyalaya under Mumbai University for twelve years and  a curator at Kalan Ghoda Arts Festival for the year 2007 and 2008.

I recently attended an intimate evening at the house of actress Mita Vasisht,  where Mandakini  presented a short piece from Mahabharata. A multi-media dance theatre form, an adaptation in Hindi, of Tagore’sKarna-Kunti Sambad, incorporating multiple styles, painting and theatrical elements. Totally mesmerised by her interpretation and presentation, I sat down to talk to this graceful and soft spoken dancer who has given a total new twist to Mohini Attam

Tell me about your ashram experience?
As the chair-person of Shaktiyogashrama, founded by Swami Shri Harish Madhukar, I conduct residential programmes at the ashram, initiating young minds into holistic lifestyles and spiritual principles that have shaped Indian art and life and given it it’s unique character.

What is the dance gurukul all about?
Having understood the essence of Yoga from Babaji, I studied the details of the yoga shastra under Shri Sharad Pathak of the Tibetan Global Research Institute to further co relate Dance and Yoga. I found that not only is Indian dance essentially spiritual, but the very form is nothing but yoga - perfected body geometry leading one to a perfected State of Being. I discovered that Indian dance is sensual, scientific and a journey to the Source. I wondered, why dance not taught like this, lived like this. Why has performing become a sensual entertainment, a mere profession, a hypocritical expression of divine themes that are not lived or genuinely felt? These questions gave birth to the Nateshvari Dance Gurukul, a space that addresses all these issues and grooms young dancers to look at themselves while they look at the art.

Your dance awareness program is well known. Please throw more light on it.
My lecture-demonstrations on Indian Dance that are mainly aimed at reviving the roots of Indian Dance in Yoga, have inspired young dance students to re-look at the art and its practice; they have been eye-openers for students of allied disciplines such as architecture and design and made them aware of the breadth and potential of Indian Dance. They have also created a love for the idiom in lay persons. I have taken these workshops to schools, colleges, Dance Schools, government as well as corporate organisations and professional colleges of allied disciplines like Architecture & Design and the Industrial Design Centre, IIT Bombay and many more.

What about your  writing work?
I write articles on classical Indian dance in many leading news papers & magazines. I love to write; I feel  that just like dance, I can express myself  through writing as well. Writing helps me to look at dance in a more in-depth. To me dance and writing are similar in many ways.

Among my writing works   are a  Master’s thesis: The Evolution of Hastas from Mudras;  Ananda Yoga: Conversations on Happiness, being dialogues with Swami Shri Harish Madhukar ;  The Yoga of Indian Dance:Concealed beneath the rich and intricate fabric of classical Indian dance lies a system of mind -body discipline that is at once aesthetic, symbolic and yogic. Its themes steeped in mythology, still contain wisdom relevant to our times. This monogram explores the above theme. Sutras on Dance : In the form of personal ruminations, these sutras are meditations and reflections on performing and performing techniques that stem from the philosophy and practice of yoga. Meant to stimulate deep cogitation, they talk of the principles of watchable form and performing techniques that are hidden in Nature and Yoga. They also question the need to perform, its validity and dangers.

How are your performances and choreographies unique from others?
Performing and choreographing is an important area of my work; I feel that performing is nothing but the practice and perfecting of the art and should be continued to the end of one’s life, irrespective of age and market forces.

She has composed many dance pieces that are very simple and easy to understand: her composition of Maricha Vadha from the Ramayana, Kalidasa’s description of Varsha ritu, Vasanta ritu and Kamadeva nrityaamong others, are notable for their vibrant and dynamic dance and mimetic expression. Her experimental pieces include a solo dance ballet, Shiva-Parvati Vivaha based on Kalidasa’s Kumarasambhava which uses subtle costume changes and the techniques of Bharata Natyam, Mohini Attam & Kathakali,  to delineate characters. Not just that, Mandakini recently choreographed Dhrupad sangeet for an avant-garde film ‘Man Eats Rock’ directed by Munir Kabani & Nikhil Chopra and  produced by the Hermes Foundation, Paris.

She is one person who tirelessly works and makes efforts to give richness to the Mohini Attam repertoire in all possible ways. Her forte is the creation of solo dance pieces that are innovative within the framework of the Mohini Attam tradition and she creates all the items that she performs. Her work is marked by a dynamic use of space and the creation of powerful visual images conveyed with a moving simplicity that does not fail to touch even a lay person.

Sandip Soparrkar is  a well known ballroom dancer and a Bollywood choreographer who has been honoured with two National Excellence awards and a  National Achievement Award by the Govt of India. He can be contacted on sandipsoparrkar06@gmail.com