A grand homecoming for Maa Durga

A day before the actual festivities begin we take a look at the preparations that go behind the oldest Durga Puja pandal in the city. 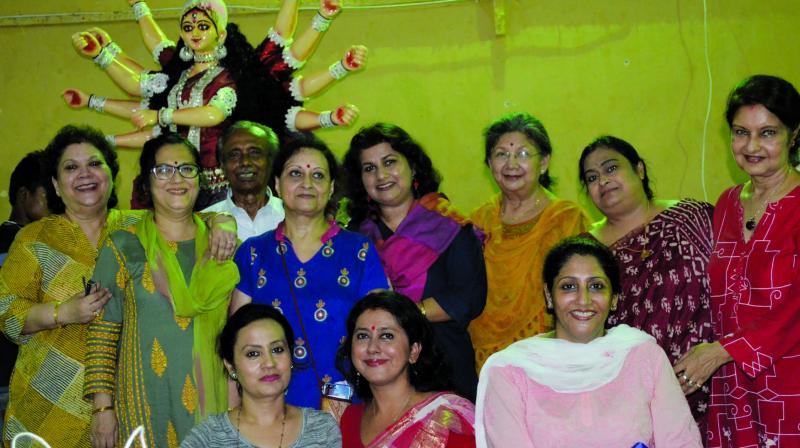 Women of the Durga Bari Samiti posing before giving final touches to the idol.

Durga Puja is among the most widely celebrated festivals of India and one that observes the triumph of good over evil. The rituals and extravagance of the festivities are circled around the worship and veneration of the divine goddess Durga.

As we make our way to the city’s oldest Durga Puja pandal at Grant Road, which marks 89-years of its existence this year, we are galvanised by the craftsmanship and meticulous preparations that go behind invoking the deity to the pandal. The fervour and devotion is palpable in the air as we step into the Tejpal hall at Grant Road.

Upon entering, we spot nine women of the Durga Bari Samiti who are busy adorning the deity and her accompanying idols, known as Durga’s children. As these women bring the goddess to life, one cannot help but draw parallels to the nine avatars of the goddess herself.

Mitali Poddar, the convener of the Samiti informs us that it took her team a total of six months to plan this festival. Standing next to Mitali is Bhavesh Sarcar, a 73 year-old artist from Kolkata, who has been making idols for the pandal for last 40 years. The artist looks busy as he gives the final touches to the idol of Karthikey and a strikingly pink idol of lord Ganesha. Bhavesh explains the reason for the pink colour in his broken Hindi, as Mithali cuts in to help, “We try to keep the process as close to tradition. However, it is important for them to make it look appealing too.” she says.

Paromita Bannerjee, a member of the samiti seconds Mitali saying, “people come for pandal hopping and look forward to see something new each year.” She further adds that the theme, colour combination and appearance is given a priority, so that the idols and the pandal look alluring to the visitors.

Mitali also informs us that this year the theme of the pandal is Mela (fair). However Rupa Roy, another member of the samiti interrupts to say, that the idol has been given the look of a princess this year and therefore they have donned her with handcrafted silver jewellery and the traditional hand woven maroon saree, all the way from Kolkata, “We follow the Ekchali (all deities under one roof) tradition,” she says.

The ‘V’ shaped idol of goddess Durga, with a lion’ s head to her right foot and the Mahishsura to her left, follows a tradition, as Mitali explains, “is a ritual to see the goddess’ feet when she finally leaves on the day of dashami.”

The idols at the pandal are made eco friendly with water-soluble colours. The pandal too does not have any plastic, thermocol or varnish used.

Participating in the festivities for more than four decades, team members Keya Dutta and Jayashree Basak look completely occupied guiding the other ladies. They observe many changes in the course of the celebrations over the years. “It used to be a very intimate affair at home, but we have gradually evolved” says Keya, adding to which Jayashree says, “the number of people were very less, there were no committees and things weren’t organised like they are now.” The middle-aged women feel ecstatic to participate in the tedious process and say, “we enjoy it more now,” as they smile.

On the other hand, the youngest member of the team, Dr Dola Roy, enjoys the process of creating and making the goddess Durga. “It’s like how you want maa Durga to look like and its a fulfilling process,” she smiles.

Apart from prepping the idol, the Durga Puja celebrations also include offering multiple prayers —evening, late night and prahar pooja to the goddess, the dhunuchi naach, sindoor khela and the 36 bhog on the last day following the vijayadashmi visarjan process. Anita Basu, another member of the samiti says, “If you are missing out on visiting Kolkata this year then you’ll get an opportunity to witness some of the finest musicians and dancers from Kolkata performing live,” she concludes.