6 women and the sea 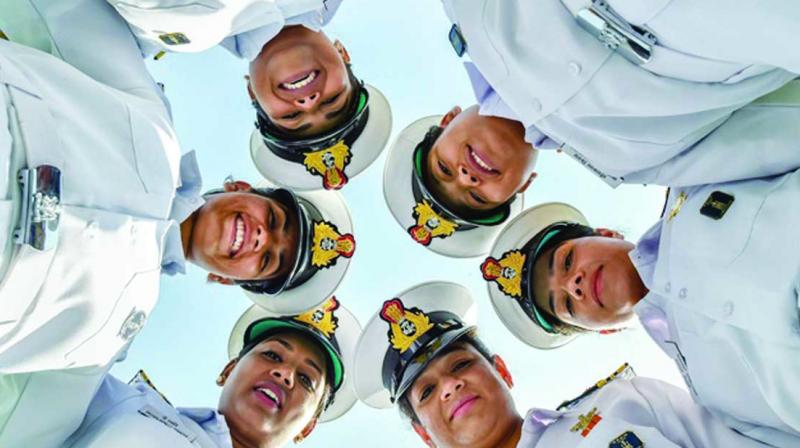 When you join the Navy everyone goes through six months of training at the Indian Naval Academy.

“I volunteered for this project as an officer,” shares Lt. Commander Vartika Joshi, who was awarded the Nao Sena Medal (Gallantry)  on Tuesday for heading the first all-women Indian crew of INSV Tarini which returned on May 21 after completing a 254-day circumnavigation of the globe that they began from Goa last September. “Before we took our first step on Tarini, our mentor, Captain Dilip Donde, told us to keep our gender behind and that is exactly what we did. The sea was not going to differentiate on the basis of gender.”

Hailing from Uttarakhand, Joshi was always intrigued by the sea. “I opted to be a part of Indian Navy because of my curiosity to go out into the ocean. But I wasn’t able to do so even after joining the Navy.  Luckily, after I got my first appointment with the Navy, they released a notice that women officers can also participate in offshore expeditions. I volunteered and post that there was no looking back.”

The crew is now the first Asian all-women crew to have successfully completed circumnavigation and first military organisation in the world to have attempted a mission of this sort. “When you join the Navy everyone goes through six months of training at the Indian Naval Academy. Since theoretical study isn’t enough, we started our practical courses on the Indian Navy sailing vessel Mhadei on which Captian Donde had done circumnavigation back in 2009. We started with the basics of the boat, emergency drills, how to navigate the boat and how to repair everything on the boat as we were supposed to be alone for eight months.”

After two years of training, Tarini was built — an exact replica of Mhadei. Joshi and her team were part of the construction of Tarini right from the time the first plank of wood was kept. “We learnt in detail about the boat as she was built in front of our eyes. Once she was ready, we took her out on various sea trials and we modified certain things as per our requirements,” she shares.

Looking back at the voyage, she calls it “a huge gradient of the learning experience” as prior to that she had no sailing experience. “Only after joining the Navy did I see the ocean. And the voyage was not just an adventure but involved persistence and a high level of maturity to make decisions. Also, the project gathered a lot of momentum and became nationally significant, so we had a lot of responsibility as every little aspect was bound to have certain repercussions.” It also had an impact on her personally as she was able to test her skills.

“Being in a confined space for more than eight months made me reflect on my positive and negative aspects as well as my crew members. And how one can use the positive aspects of the whole crew for the greater advantage of the mission. Forgoing trivial matters was another important thing I learnt, especially while living in a confined space away from loved ones,” adds Joshi who hopes that with this project, more people will look up to Navy as a profession.

“Spending time at sea was a great idea — be it the raw beauty of nature or witnessing the aurora australis or the Southern lights on our way to New Zealand from Australia. We also experienced  bioluminescence. Though we were not able to take photographs, we will always cherish these moments.”

They also took every opportunity to celebrate the birthdays of crew members and even the ship herself. “When one crosses the equator, the Navy has a tradition and we too followed on their footsteps — baking cakes and offering them to Lord Varuna (god of the ocean in the Puranas). We also celebrated Diwali which started with a video call from the Prime Minister and made dias from dough, and also celebrated Christmas. This Diwali, we will surely miss the celebration at the sea.”

But life wasn’t a breeze and there were times when they grappled with the harshness of nature. “One was the storm we faced in the South Pacific, where we experienced hurricane force winds in the order of 140 km per hour and the sea was as high as nine to ten metres. Although we were monitoring the storm, by the time it actually arrived, it was much faster than we were and it caught us in one of its zones during the late evening hours. Those 19-20 hours were probably the most difficult times — even the temperatures had dropped to sub-zero and there were hailstorms every couple of hours. We worked together, taking shifts every 20 minutes on the steering, three were on the deck and the rest were either cooking or drying gloves.”

But winds were not the only problem, technical issues too tested their teamwork. “While coming back home, we lost our steering which was a surprise problem. For a couple of hours, we were stranded in the sea and were trying to fix it. It was after 12 to 13 hours that we managed to cannibalise two parts of the system and make one side partially operational. We rerouted to the nearest port — port Louis in Mauritius and took an emergency layover for five days. It was only after three and a half days that we reached Mauritius which we could have reached in a day with a fully operational steering. We came through those hard times as a team,” Joshi says.

Talking about the relevance of the peacetime mission, Joshi says, “It spreads the idea of renewable energy. The boat is completely wind-powered and does not use any fuel for its movement. We studied the wind pattern across the world and charted our route. We had five stops and all the ports we harboured at, the local population were more often surprised that all women officers had come all the way from India, that too on a sailboat. Though India’s coastline is 7,517 km we haven’t ventured so far into the ocean and this mission has not only given an opportunity to explore but also gave a boost to the Indian Navy. We have explored places where no one really ventures — as south as 58 degrees South latitude, the southernmost tip of South America (southernmost point of the planet except for Antarctica). I believe we have created a really strong impression of Indian women all around the world.”

Since the project was on the basis of volunteering, what started as a project of 25-30 was completed by a team of six. “The project wasn’t all rosy for us. My message to the world is to give yourself time to explore and get out of your comfort level. Only when you step into the unknown, will you be able to grow and become confident.”