Mesmerised by the Maestro 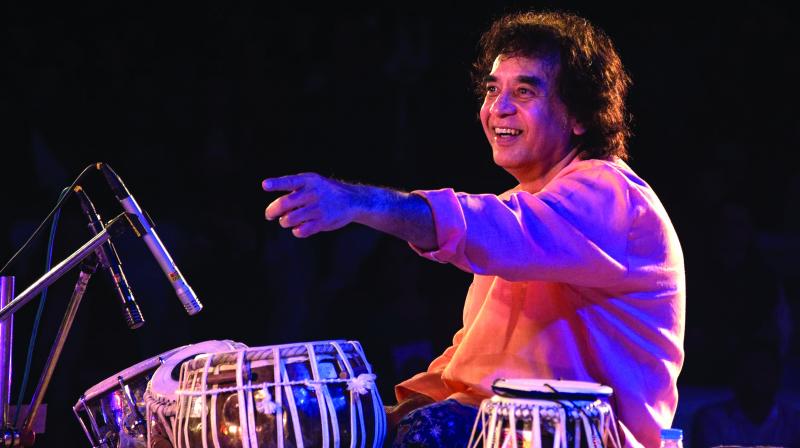 Ustad Zakir Hussain, at 68, continues to remain, arguably the most popular classical Indian musician today, in spite of being a percussionist, which is perceived as having a secondary status in Indian classical music. He was in his element at the Shriram Bharatiya Kala Kendra concert held in memory of their late Chairman, Lala Charat Ram. It was a totally packed hall, despite being ticketed, unusually for Delhi audiences. The maestro has reinvented his act several times over the past 50 years of his performances; in this concert his focus was on creativity, improvising, engaging. Stretching over an hour and a half, despite a raging cold, the maestro proved once again that time has been kind to him, in his words “when you love your instrument like it’s your father,mother, lover or brother, it becomes truly yours.”

The Ustad started the concert as a solo, accompanied by the incredibly practiced Sabir Khan, son of Mumbai based sarangi nawaaz Ustad Sultan Khan. Touchingly, talking of the old relationship with the family, the percussionist shared “I knew Ustad Sultan Khan sahib for more than 26 years. When he was sick, he told me to take care of his son, which I am doing”. Sabir’s sweet touch, and dazzling taans enhanced the concert immensely. After slowly building up the tempo, step by step creating an edifice, Ustad Zakir Hussain gave Delhi tabla its rightful due as the fountainhead of tabla, by playing two “kaydas” of the Dilli baaj. He further played one of them in Ustad Habibuddin Khan of Ajjrara’s way of presenting, using different finger strokes. Indeed his tabla repertoire is staggering, but he chose in this concert to improvise in manifold beautiful ways. Ending his solo by briefly accompanying Sabir’s sarangi, the Ustad demonstrated how his tabla could sing, by subtly showing different notes with his left hand.

The next segment of the concert had dholak exponent Naveen Sharma, a disciple of Ustad Allah Rakha play with Ustad Zakir Hussain, in turn echoing his “bols”, and then forging new paths. After this was the mridangam of Anantha R Krishnan, grandson of Palghat Raghu, and currently also training under Ustad Zakir Hussain. Fans of Carnatic music perhaps found the pitch of his mridangam too high; to match the tabla pitch, it did not have the sonorous bass tone one is accustomed to. However Ananth’a mastery is undeniable, matching his Ustad stroke for stroke, both creating, then coming back to pick up the refrain. Ustad Zakir Hussain had spoken of the difficulty of replicating the traditional tabla compositions on the mridangam “as the languages of both instruments are different”; Anantha’s performance did not even hint at any strain! This segment ended with the trio playing a traditional Punjab gharana “gat” together. The last element of the concert was Sabir Khan singing the traditional Rajasthani welcome, the “ghumar” to the delight of the audience, accompanied by the trio.

The concert truly demonstrated Ustad Zakir Hussain’s expertise in creating yet another version of his act, bringing in different percussion instruments, bringing in a folk element intertwined with traditional tabla repertoire, in the most arresting way. Truly time flew in a trice.  The ecstatic Delhi audience appropriately rose in a prolonged standing ovation.