Gurukul for the needy 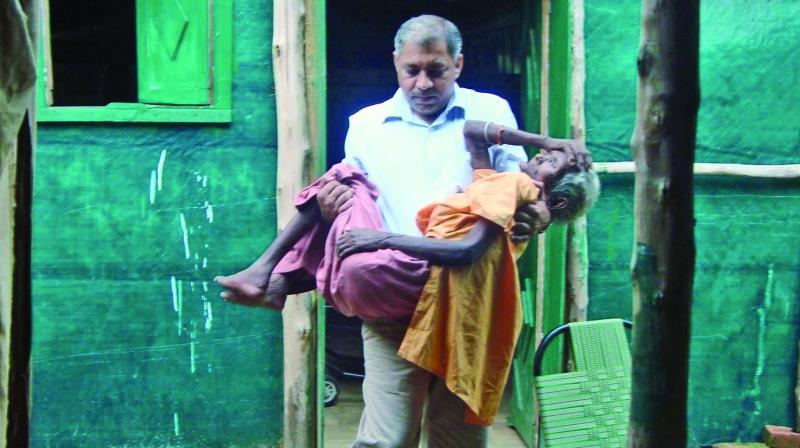 Ravi Kalra with one of his patients.

It is said that sometimes a small incident triggers a big change in human lives. That is what happened with Ravi Kalra, founder of an NGO, The Earth Saviour Foundation. His aim and effort is to cater to the needs of abandoned senior citizens and children, people with disabilities and HIV patients.

It all started in 2007, when he saw a stray dog and a poor child eating from the same trash bin. This incident had a powerful impact on him, making him devote his life to the service of the destitute. He says, “I started roaming the streets every night in search of people in need and arranged a shelter (gurukul) for them by getting a land on lease”.

As part of his organisation, he helps people in need get medical treatment. However, everything comes with its share of challenges and Ravi had to face several hurdles — from finding appropriate accommodation for the people he is helping, to facing legal charges against him.

“I have been facing the problem of land since the time we started this organisation. Initially, I accommodated the rescued in a place I had taken on lease, but the accommodation caught fire and claimed several lives. I was charged for committing a crime and ended up making several visits to the court. I had to shift the gurukul several times after that but failed in all my attempts. I pleaded with the government to provide us with land, in return they allotted us a community center that had no basic facilities of bath and toilet. So I once again took the gurukul to a rural, remote area of Gurgaon.”

However, Ravi’s struggle didn’t end there. He continues, “Even though the land is owned by me, the villagers of the area warned me to not continue with the service. They did not want to see mentally disabled people around them and believed that their presence would lower the land rate. They even lodged a complaint against me, accusing me of illegally selling organs of patients. Police raided our place and found nothing like that.”

After 10 years of its inception, the NGO now comprises 50 members with around 400 patients. “The situation is much different now. In fact, the police, courts and even the hospitals refer patients to us,” says Ravi.

Ravi is also the founder of several other campaigns including “Do Not Honk”, that persuades drivers to not honk unnecessarily. He also runs a campaign that prohibits usage of wood for cremating dead bodies, thereby insisting on electrical cremation. He has cremated more than 5,000 unclaimed bodies so far.

In the past 10 years of social work, Ravi has come across numerous people living in heart-wrenching conditions. But one incident continues to be closest to his heart. “Once, I came across a man who had long unkempt hair. He had lost his memory. After getting him to my gurukul, I discovered that the old man was a retired judge and was abandoned by his children. He passed away after five years,” he says.

Ask him about his plans to take his endeavour forward and he says, “I want to run the world’s largest charitable temple of humanity, which would give shelter and food to thousands of underprivileged people, along with easily accessible medical services and a police control room.”