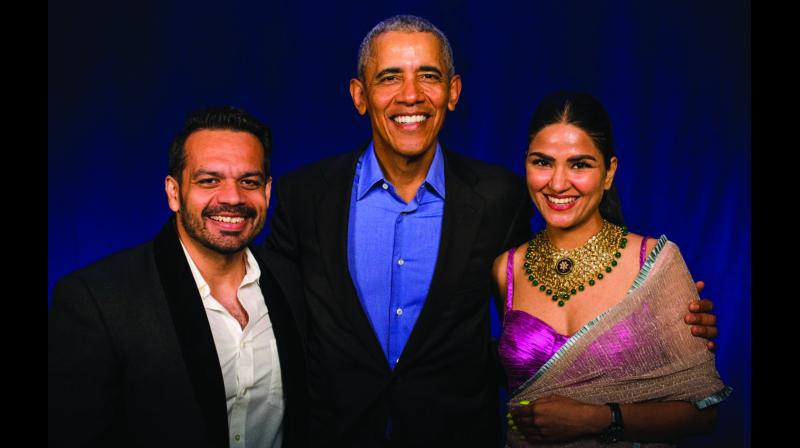 It was with an intention of inspiring audiences to live a better lifestyle that Gaurav and Ritu Taneja, a pilot couple, started their vlog. But little did they know that their vlog would one day lead them to meet the former US president and Nobel Peace Prize winner, Barrack Obama.

The vloggers recently met up with the former US president in a meet organised by Google where six creators from the Asia Pacific were invited recently in Singapore. Speaking to Gaurav, he expresses that it was one of his greatest moments to meet former President. “His views on humanity and the strength in unity, especially to uplift the less favoured and underprivileged sects of society, he really showed us his compassionate side,” he adds.

While many may want to know what the Nobel Peace Prize winner was like in real life? Taneja responds that he is a “one of a kind personality; a leader the world needs and loves.” When asked about whether he was nervous before meeting him or not, he responds that he and his wife “were definitely nervous before we met him.” but once they got chance to speak to him, “He made sure we were comfortable in his company. Never for a moment did he make us feel like he is superior, we had a few minutes with him. He made sure we had a common subject to strike a conversation.”

The focus of the meet was on the creators and the former US President to share their views and vision to make a change in the environment with a focus on water conservation and rainwater harvesting. “We discussed our views on water conservation and rainwater harvesting with him and found that he sincerely working towards awakening people across the world to save water resources and the planet for our successors by taking small steps in our daily lives,” he expresses.

He and his wife are pilots by profession and when the former US president learned about their profession, he said, “I now feel safe and you guys can fly me back home if I’m delayed.” Gaurav felt precious, further adding, “We were absolutely honoured that someone so renowned, influential and impactful felt safe with us, being around him and just the thought of it coming to his mind made us feel significant.” We hypothetically asked him what if he got the opportunity to pilot Obama’s private jet, and his response was simple, “I mean, just think about it, us being part of Mr Obama’s crew. It would be such an honour, a gift really!”

He also has a YouTube channel titled the Flying Beast where he showcases the importance of health, fitness, family and more specifically, the responsibilities of a working pilot duo (couple). Interestingly, his vlogs have also captured the attention of the chief minister of Meghalaya, Conrad Sangma, he details the feeling, “I was caught off guard with the beauty of the state and honestly, it was an unexpected, refreshing trip for me, I loved every bit of it and I’m guessing the people of Meghalaya loved the Vlog too because of the Hon’ble Chief Minister of Meghalaya retweeted our vlog in support. However, Meghalaya was just the beginning.”

He concludes the conversation with the learning he gained from the meet with Obama, saying, “We learned that everyone can make a difference to an individual, a town, a country, and the whole world, without fame, in small, tiny ways. We also learned that everyone with any amount of fame, and digital presence has a responsibility towards their audience and fans.”