A controversial matrimonial advertisement that has gone viral on social media has raised certain questions about the Indian marriage market. 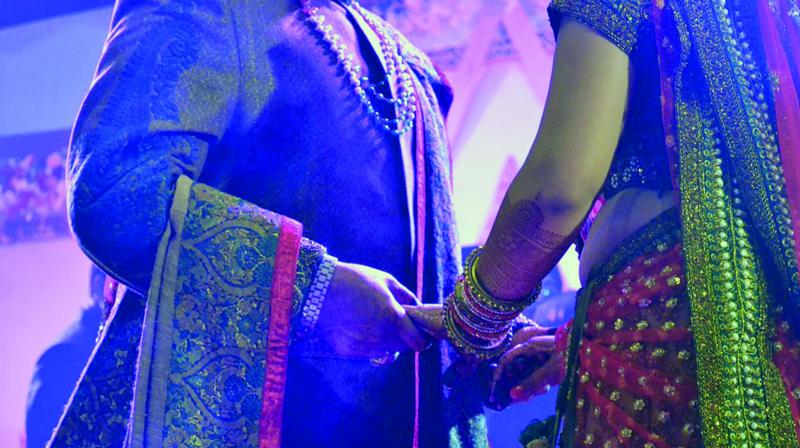 Many women are the finding the non-feminist clause to be most disturbing.

A matrimonial advertisement in a leading daily that is causing an uproar on social media has a 37-year-old industrialist seeking a bride, and his specific demands are that she should be a non-smoker, non-feminist, good cook, never have been married before or having any child, and should be under the age of 26 years. The ad that has gone viral is receiving a massive backlash and many are fuming at the regressive and misogynist mentality that still exists and is flaunted without any qualms.

“After so many phases of women’s movement I am still surprised that leading publications provide space for such regressive advertisements. In the name of generating revenues we can’t let online and offline portals get away with publishing such things. And some sites make it easier for people with prejudices to feel that their sexist/class/ caste views are valid and legitimate,” says Paroma Ray, activist. 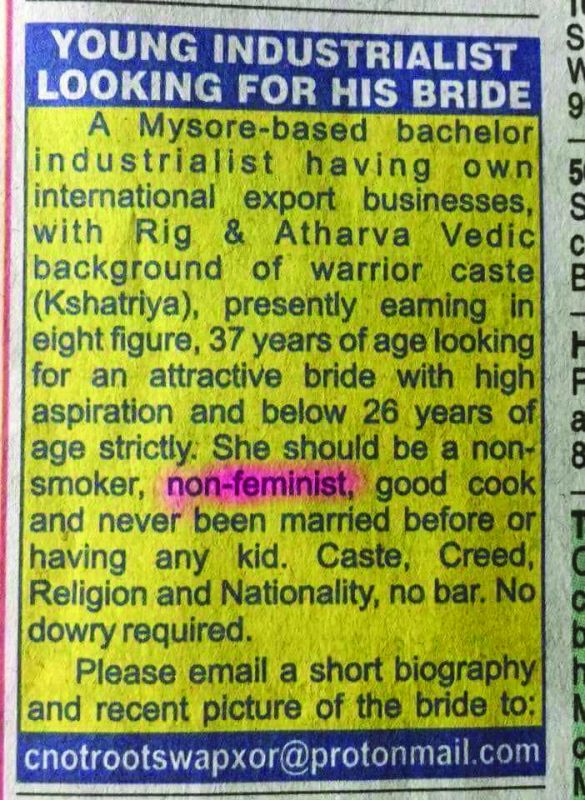 Many women are the finding the non-feminist clause to be most disturbing. “To me the most objectionable part of this ad is the non-feminist clause which clearly reflects that she should have no voice of her own. Without the non-feminist clause, conditions like non-smoker could be a personal choice, which even a woman looking for a match could have asked for. It is high time feminism is accepted as a right — a right to have equal rights to career, health, financial, fertility and social choices. A right to respect, dignity and freedom of expression. That is feminism. If anyone says that he wants a non-feminist wife he is declaring that he intends to be dominating, discriminating and perhaps abusive. This definitely deserves a massive public backlash where the country declares that such kind of dark paradigms are not acceptable anymore,” opines Niru Kumar, senior psychologist. 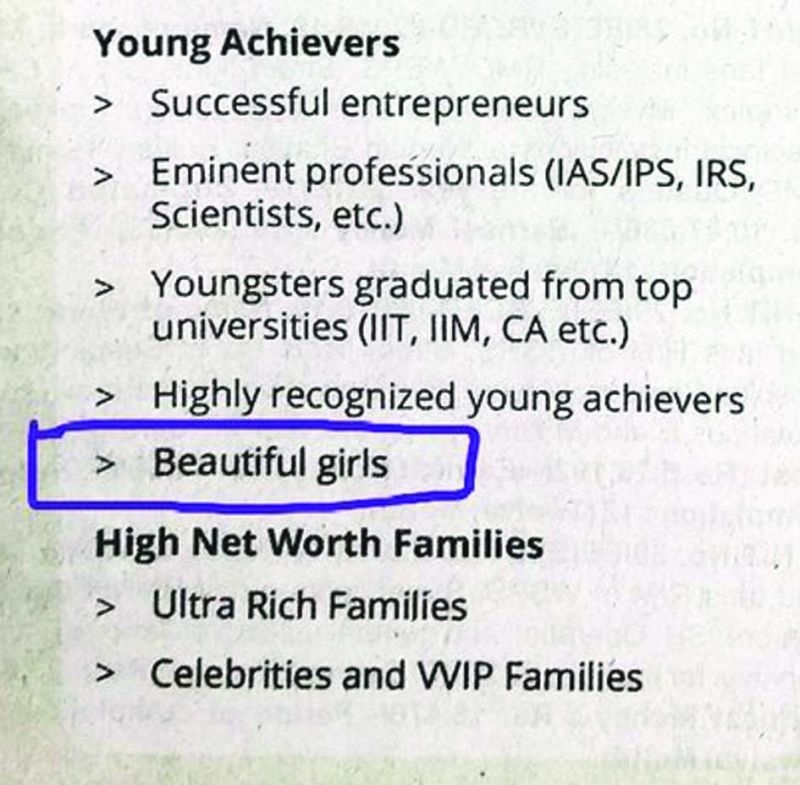 Life coach Suneel Vatsyayan agrees with this and points out that the matrimonial advertisement is an explicit expression of his actual expectation from a would-be bride, and these expectations mirror a disturning truth prevalent in our society. “In reality the ‘non-feminist’ is an undercurrent norm of inequality prevailing in the society. Unfortunately it is the deciding factor in marriages in general and relationships in particular. Gender equality makes people uncomfortable and their search for unequal partner remains unending and unfinished. This man looking for a bride seems to be degrading, offensive and wild in his expression of expectations from his partner. Gender is still an unfinished agenda for majority in our society irrespective of urban and rural divide,” he says.

Relationship expert Suzy Singh agrees that the views expressed in the ad reflect how our society is still deeply entrenched in patriarchy and misogyny, but she also feels that every person has a right to his personal choice of how he would want his life partner to be. She says, “Evidently, this matrimonial seeker is quite sure about want he wants and is dogmatic in his view about the type of woman he believes is capable of becoming a good, obedient, non-defiant, and easy to handle housewife. Nothing wrong with that, after all, to each his own. I’m not sure if we should run him down for being so specific in his search details. It’s not a sin to be orthodox or old fashioned or even regressive in one’s views. It’s a free world, so I fail to comprehend why this hue and cry over a seemingly sexist and strongly patriarchal demand. Isn’t it fairly normal in our society? However, what isn’t mentioned in the ad and may be of greater relevance or concern is the hidden anger directed at the liberated woman prototype. Anger usually surfaces as a defence against unresolved fears in the psyche. And fear seeks understanding and empathy, not judgement and hatred, which could effectively strengthen the dogma and result in a potential acting out of the anger by the person receiving it, making it a greater social threat.”