The sight of women queueing up to buy liquor has offended many a sensibility, Surely women can enjoy a drink 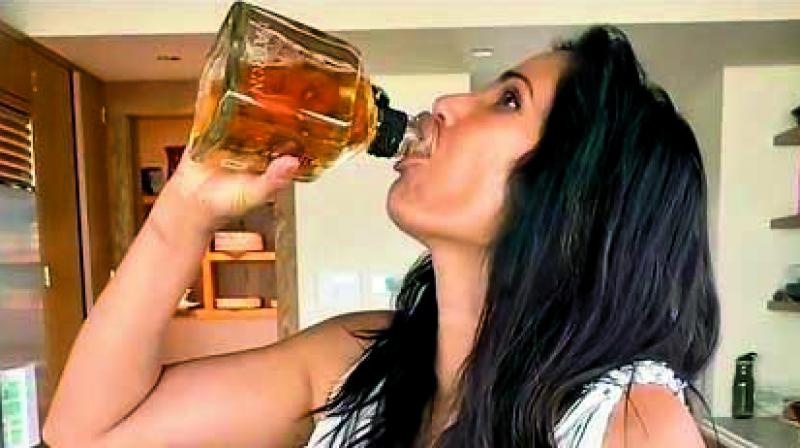 When lockdown restrictions were relaxed by many states to allow liquor shops to open, no one was surprised to see long queues outside them, or even milling, unruly crowds.

But what, apparently, came as a shock to many was the fact that women were a part of those standing in line to buy their favourite tipple!

In the twenty-first century India, women play an equal role as breadwinners in the majority of households and carry more than their fair share of responsibilities. Yet, while it’s perfectly understandable for a man to seek release from stress in a glass of liquor, it seems this route is an unacceptable choice for a woman.
Social media was rife with trolls regarding women who stepped outside the ideals prescribed by the male-dominated society.
Shweta Keerthi Sethia, Cofounder, Purple Martini Events, believes it’s hypocritical to say that men deserve a drink at the end of the day, but women don’t. “If men have worries, so do we,” she points out.

“In fact, wives have double the stress, dealing with already stressed husbands. When it comes to business worries, I own an events management company and am worried about when things will pick up in our sector because nobody is hosting anything right now.”

Shweta says that she gets together with a bunch of her girlfriends once a week over Zoom. “We all open a bottle of wine and chill.”
“I look forward to these sessions. There is nothing wrong in that,” she adds.

Worrying over a tipple

In many homes, women are stuck with a ‘full house’ during this lockdown husband, kids, and in many cases, parents or even in-laws too. They probably have no house-help, or hardly any, but yet have to meet a full list of demands and attend to extra chores as well add to the list kids to entertain or supervise the whole day.

Many in joint families will have to make endless polite conversations with relatives and tiptoe around the husband who is worried about future finances.
Working women have their own jobs or businesses to worry about worries about being sacked or about when or if the market will pick up. If this list doesn’t merit a drink to help cope, what does?

Priyanka Chigurupati, Executive Director, Granules Pharmaceuticals Inc., whose family owns the wine brand KRSMA Estates, feels calling a woman immoral because she enjoys a drink or two as a stress buster while a man doing the same is completely accepted is hypocrisy.

Even if a woman is not worried and is at peace, a woman, as much as a man, is entitled to enjoy a cold beer, a nice bottle of wine, a cocktail or something stronger. After all you are home-it’s like a holiday, and you might as well make the most out of it.

And even if it was a ‘normal’ day, not a lockdown evening, what’s wrong with unwinding with alcohol? Being critical of it is like saying “Oh My God, look, she is eating a packet of crisps” which, by the way, is far unhealthier than a glass of whiskey!

Maya Shankar, restauranteur and owner of F9, calls taking a ‘moral stand’ on woman having alcohol is silly. “Anywhere else in the world you can buy booze at the supermarket. Only in India, you have separate stores. When shops opened after lockdown, everyone was commenting about how crazy the lines were and sharing videos.

On the third day, I decided to drive past a store in Banjara Hills. There were five people waiting in line, and I found out that there would be a separate queue for women if there were any. So, it would actually be easier for a woman to walk in and buy a case of beer! I rang a few friends and offered to buy them what they needed,” she adds with a cool chuckle.