Women among the Bedouin almost never work outside the home but she breaks all stereotypes. 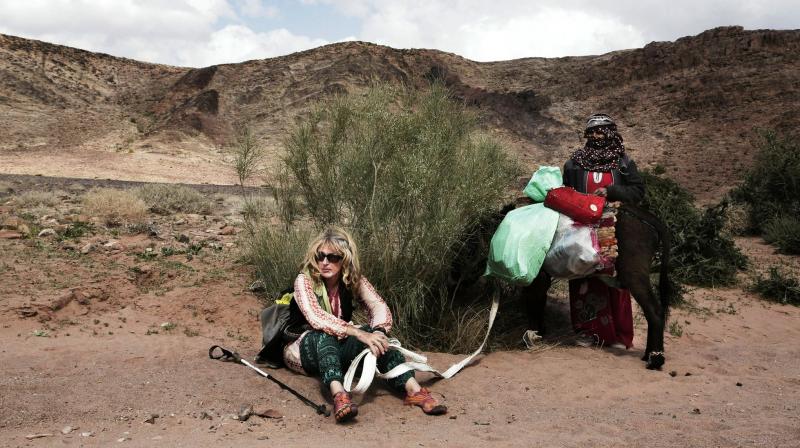 Umm Yasser started hiking when she was a child and knows the mountains and the valley by heart. (Photo: AP)

Egypt: Amid a stunning vista of desert mountains, a Bedouin woman, Umm Yasser, paused to point out a local plant, and she began to explain how it was used in medicine to the group of foreign tourists she was guiding.

Umm Yasser is breaking new ground among the deeply conservative Bedouin of Egypt’s Sinai Peninsula. Women among the Bedouin almost never work outside the home, and even more rarely do they interact with outsiders. But Umm Yasser is one of four women from the community who for the first time are working as tour guides.

“It is against our culture, but women need jobs,” the 47-year-old Umm Yasser said. People will make fun of us, but I don’t care. I’m a strong woman.” They are part of Sinai Trail, a unique project in which local Bedouin tribes came together aiming to develop their own tourism.

Founded in 2015, the project has set up a 550-kilometer (330-mile) trail through the remote mountains of the peninsula, a 42-day trek through the lands of eight different tribes, each of which contributes guides.

The project has been successful in bringing some income to the tribes, who often complain of being left out of the major tourism development of the southern Sinai, home to beach resorts and desert safaris.

Until now, all the project’s guides were men. Ben Hoffler, the British co-founder of the Sinai Trail, felt it was not enough. “How can we be credible calling this the ‘Sinai Trail’ if the women aren’t involved?” Even after years of trying by Hoffler, almost all the tribes still reject women guides. Only one of the smallest, oldest and poorest tribes, the Hamada, accepted the idea.

There are some conditions. The tourists can only be women, and the tours can’t go overnight. Each day before the sun sets, the group returns to the Hamada’s home village in Wadi Sahu, a narrow desert valley. The organisers also urge the tourists to photograph the guides only when they are wearing a full veil over the face that covers even the eyes with mesh.

Umm Yasser was the first to join. She said she started hiking when she was a child and knows the mountains and the valley by heart. She convinced the families of three other women to allow them to work as guides.