All the right ‘moos’

You may not believe it, but there is a farm in haryana where cows listen to jazz music, which helps them produce more milk. 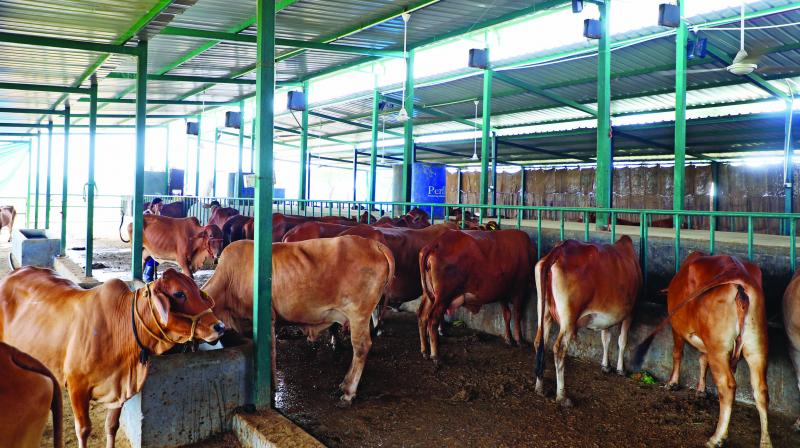 A cowshed at the House of Nanak farm, fitted with speakers that play jazz music to help increase the cows’ milk production.

Well all know about the soothing powers of music. It has a unique connection with emotions. Essentially, music can act as a powerful stress management tool in our lives. Plenty of students and workers often put on headphones to help themselves drown out distractions and be more positive and productive. But can music also help dairy cows get down to business?

House of Nanak, a farm in Haryana, certainly believes so. The farm plays music — and that too jazz —  like Beethoven’s symphonies, for tits cows so that they feel relaxed and at peace when producing milk.

“Whenever we would play music anywhere around the cows, their heads would turn up towards the speaker. That’s the signal I got from them. I realised that they are much happier and lazing around when they listen to music,” shares Tushar Singh, owner of House of Nanak.

Tushar, who is also the founder of Mr. Dairy, did a lot of research work before setting up this brand. That is when he got to know that music can actually help facilitate the milking of animals. He continues, “So, when I was setting up this dairy, I did a lot of research work. A lot of people said that it increases production by 15-20 per cent, but in our case, it has helped us by 12-13 percent.”

It has become a habit now for Tushar and his cows as they both look forward to the daily music session. On asking what kind of music is their favourite, Tushar reveals, “They like jazz, trumpet, and saxophone the most. They will love any mild music and we usually do this music session whenever we are milking them.”

Speaking about the logic behind this process, the owner shares, “Whether you know it or not, even animals are stressed. According to a study, cows find it easy to release oxytocin, which is a hormone that is related to the milking process, when they listen to music.”  He believes that this is because the animals feel their stress  reducing by the second when they have music playing in their ears. “It allows them to stay calm when the milking process is on,” he further elaborates.

Presently, the farm houses more than 120 cows and he likes to pamper them all. For him, they are his family. “It is a kind of bond. I feel like they understand me. Even animals can read emotions,” he adds. Apart from music, his cows also enjoy when given massages and baths on time. “They feel pretty cool then as they don’t feel any hassle,” he concludes.