This isn’t the first time Nanjundaswamy has used art to convey the state of roads in the city. 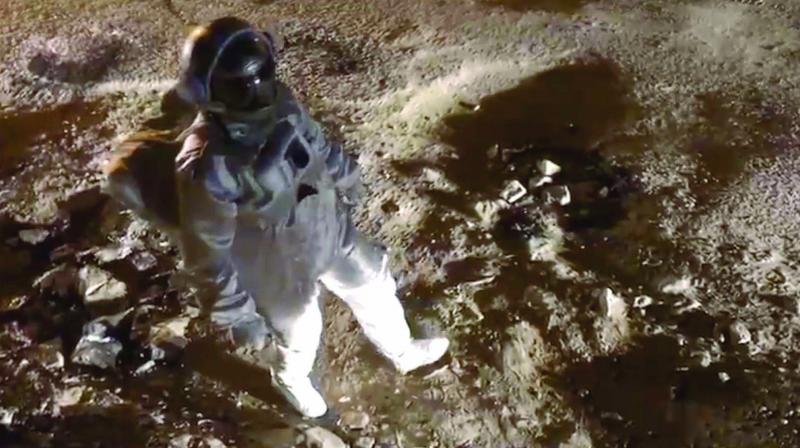 Screenshot from the vedio where Baadal walks through the roads of Bengaluru dressed as an astronaut.

Symbolic protests catch people’s attention easily. Baadal Nanjundaswamy, a street artist from Bengaluru, has used some quirky ways to draw the attention of the authorities towards the pathetic condition of roads. Can these protests bring in change as well?

Recently, a viral video of a man dressed as an astronaut set the internet on fire. While netizens were busy trying to find out who the person was, street artist Baadal Nanjundaswamy, who made the video, tweeted the same with a ‘hello’ to BBMP. A
closer look at the video reveals that Baadal was in fact walking on the ‘crater-like’ potholes on the streets of Bengaluru. This isn’t the first time Nanjundaswamy has used art to convey the state of roads in the city. Earlier this year he used illustrations around the potholes to draw the attention of the authorities towards the pathetic condition

This has persuaded many people from across the country to use the same quirky technique to invite the attention of the authorities to the pathetic condition of the roads that have potholes as craters on planets. Many people responded to the tweet asking Baadal if they can borrow the suit. Despite people revolting and campaigning against the lackadaisical attitude of the authorities for years, nothing much is being done in this regard. We ask social media critics, government authorities, and public at large about their take on these types of protest. Do they think that such steps are going to facilitate the otherwise snail-like development process?

Baadal’s approach to highlighting issues of urban governance has been that of using art and creativity to draw immediate attention and expeditious solution. How many young people in our city use art to address civic issues? Not many, but the ones who do, put all their creativity, time, and resources to make it happen. One may call Baadal’s
artwork a form of ‘silent protest’, but it really is a popular cry that needs to be heard and addressed. If citizens don’t engage with what’s happening in the city and hold the responsible civic agencies accountable, then who will? Lack of political will stems from lack of engagement from both sides and Bengaluru, with its ward committees, has an opportunity to get this right. Things will surely change, but it’s up to us, the citizens, to decide the pace at which we want this change to take place. Over the past few decades, a new phenomenon in urban governance of Bengaluru has been observed. The rapid development has rendered the existing modes of governance ineffective and hence numerous citizens have come forward with an aim to bridge this gap. Bengaluru is a unique city in which such citizens are more active in the public domain, both online and on the ground, and have engaged in matters related to misallocation of funds, environmental causes, and tawdry infrastructure that has in a way encouraged the citizens to contribute to the policy discourse.

Especially in a democratic
country like ours, where people have the right to expression, I believe such demonstrations are actually a more responsible and thoughtful manner of voicing the needs of the unvoiced. If such quirky actions do not intrude or harm
others’ lives, then why shouldn’t they be justified? It should be very much appreciated as a thoughtful way of protest over the annoying strikes and hartals which further disturb the society. Such demonstrations have, around the world, bore significant fruits. Mahatma Gandhi’s Salt March was actually a creative demonstration from our history that brought about significant changes and inspired movements leading to the end of British raj. The Chipko Movement where a group of Indian village women hugged their trees in protest against cutting of trees is yet another significant demonstration which succeeded.

Likewise, Nanjun-daswamy’s creative demonstration gathered attention of the country within days. The annoying protests and strikes over the years on the pathetic condition of our roads almost always yielded no result. Such eye-opening actions should be encouraged.

As much as it pains me to know that these campaigns have little to no effect in persuading authorities to take the initiative, their creativity is worth appreciating. These endeavours attract eyeballs and definitely help make people, who are otherwise not in the know, aware. And that can spark someone else to take the initiative, adding to a sort of people’s movement. Maybe in the long run, this will prod the authorities to get up and take notice. So, call it an indirect impact, but, yet, an impact.

An artist has the freedom to express his ideas without any limitations and I think Baadal Nanjundaswamy has highlighted the concern effectively. The video has gone viral because people relate to the difficulty they face. This type of an expression is not only peaceful, but also creates social and safety awareness. This, in my  opinion, will bring the change we need.