Solomon Raj is a proud father to 47 HIV positive children. 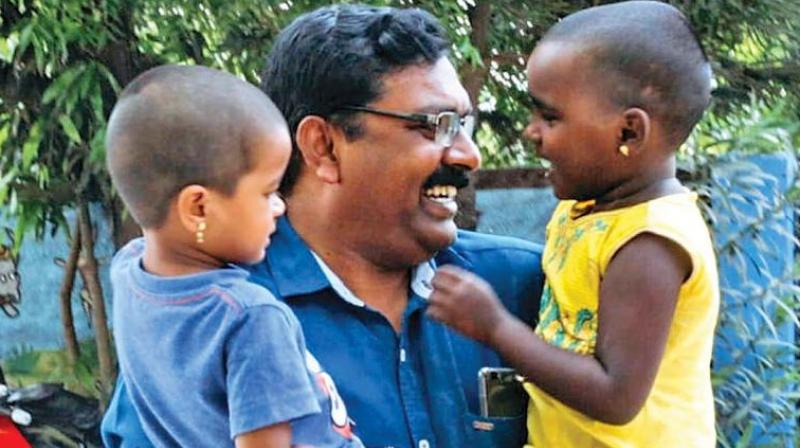 Solomon Raj with his kids from Shelter Trust.

Solomon Raj is a proud father to 47 HIV positive children. These children had been abandoned by relatives when Solomon took them under his wings. In 2005, a friend mentioned about a 7year-old-boy to Solomon who had seen six HIV related deaths in his family — mother, father and siblings. He was the lone survivor and with only a few days to live.

“It basically occurred to me after my marriage. In 8 years I and my wife did not have children. So I thought of adopting. I did not want to go baby shopping and find out a perfectly healthy child rather I wanted to do something different. I wanted to adopt a HIV positive child. But due to lot of family pressure it did not happen. After 8 years we had biological children of our own but the guilt of not adopting a child was haunting me all the time. So when an opportunity came I first thought of adopting a child and putting him in an orphanage and taking care of all his needs financially. But none of the orphanages were ready to take in the child because of his HIV positive status. So there was no other choice for me other than taking the child home. So that was my first initiation”, says Solomon.

When Solomon took the child to his office, people who regularly lunch with him started avoiding him. “The child sometimes used to cry at the window and it would catch everyone's attention or he would be sleeping and when he would be sleeping , since I had very little knowledge of HIV, it used to scare me that maybe he's dead. So I was never at peace. When I started taking him to my office, they were fine with him initially but after they came to know about him they started keeping distance from both me and the child. That made me adopt one more kid so that they both can have each other's company, watch TV or play carrom. And so one led to two and two led to three and now we have a big family,” explains a proud Solomon Raj.

Speaking about the kind of societal pressures he faced, he says: “Everywhere I was subjected to questions from neighbours. They would ask why we have taken these children in, why do we take them to hospital and so on. Even when I was about to move out because ours was a very small house to accommodate our growing family, there would be never ending questions from the landlords.”

Appalled by their ignorance he decided to prove a point and show people that it's perfectly normal to live with HIV children. “I definitely feel that awareness is the key to remove the stigma around HIV. When people come to my home usually the kids would go running to them and they would tell the kids to stay away or keep distance, they get very cautious of these kids, their eyeballs would pop out in fear. But I make it a point to eat with the kids and we feed each other, sit beside them and include them in all our activities so that people know that HIV is not a communicable disease. So when they see me eating from the same plate as these kids, they rebuke me and I take that opportunity to explain everything about HIV to them. This is how I am working towards eradicating the fear from their minds, one person at a time,” states the humanitarian.

He set up Shelter Trust, where he is assisted by 11 staff, who are also HIV Positive, and commercial sex workers to take care of these children. “It was very difficult for me to manage everything at home singlehandedly since my wife is the main breadwinner of our family. So I wanted to employ some help but nobody would agree to helping.  That's when it struck me that there are so many women who are in need of a shelter because either they were HIV positive or commercial sex workers. So by employing them they would actually get rehabilitation. The kids have found wonderful mothers in these women”, says an elated Solomon.

Since all the children are immuno-deficient, they are more prone to falling ill. Treatment gets very expensive due to their special needs.  Solomon has been juggling three jobs and multiple other odd jobs to make money for the family. “Air borne and water borne diseases are the worst enemies to an HIV positive person. If you and I need certain amount of calories in our bodies, they would need 210% more calories for their bodies to function. They require a lot of proteins. They are given the ART (Anti Retroviral Treatment) medications twice daily under supervision. Apart from these the children are prone to a lot of opportunistic infections. For example, they go to school and share foods from other children that they are not supposed to eat or run out of water which we give them and drink from the tap; these make them catch viral infections like flu, diarrhoea, etc. We have a small medical room with four beds and an on-call doctor and we train our children to take care of themselves as well. We have a diet chart that is recommended by a nutritionist, which is a high protein diet”, explains Solomon.

A fundraiser by Milaap aims at collecting Rs 10 Lakh for Solomon's 47 children. Solomon's fundraiser on Milaap has already collected nearly Rs 1.5 Lakh, with the help of more than 40 supporters. “It is a big struggle, so we have requested Milaap to do a project for us so that crowd funding can be arranged. The biggest issue is health, since I cannot predict how many children would fall sick the next month and if at all they do what kind of medical attention they would require and what would be the expenses. There's always uncertainty regarding the finances. On an average our monthly expenses will be Rs 2 lakhs to Rs 2.5 lakhs,” says Solomon.

All of his kids call him ' Appa' and as a caring father he feels completely responsible for their education and their health. “All of them go to school; there are four of them who have enrolled into engineering this year. Six children have written their 12th exams. Another has just finished her B.Com degree. Because if we have to send them back to the society, education is very important so that they can survive and be financially independent,” says the proud father.

The humanitarian shares his driving force with us. “It is the Indian Pledge: India is my country; All Indians are my brothers and sisters. If we can only follow this much, and feel that our fellow human beings as our own brothers and sisters then there would be no stigma, no discrimination, no poverty, no rape, nothing. And if you have someone in your family who is an HIV positive, I urge them not to throw them out. These children are innocent and suffering without any fault of theirs”, says Solomon.