A never-ending tryst with nature

Avijit Dutta’s works are endered with gentleness and exemplify the artist’s experience of reliving moments. 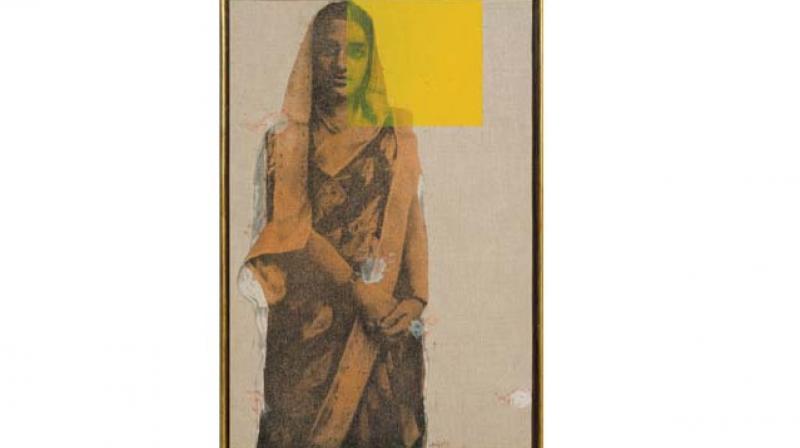 Kolkata-based artist Avijit Dutta feels his inner journey is best expressed through elements of nature. "I am immensely attracted to nature and it is a vital part of my work - whether it is flora and fauna, seascape or landscape. Nature is everywhere around us and I like to portray it in my work," says Dutta whose solo show, titled Ensoul, of 10 large works is being presented by Gallerie Ganesha at the India Art Fair 2018 from tomorrow onwards (February 9 to 12). Thereafter, the exhibition will continue at Gallerie Ganesha in Greater Kailash.

“I always portray nature in a positive light, showing how we can bring ourselves closer to nature. In Ensoul too, there are banana leaves, flowers, still life, sea…that is all part of my ongoing tryst with nature. I do show other subjects like people and objects in my work, but all are juxtaposed with nature,” shares the award-winning artist whose technique is reminiscent of early Renaissance frescoes.

Explaining what he means by Ensoul, Dutta says, "It means to hold something close to your heart and soul. My work is based on memories and relics from the past. The fond memories and sweet reminisces become a part and parcel of every person, often defining him and also shaping his personality. Since my works are based on treasured moments a person forever carries within his entity, I titled the series, Ensoul." 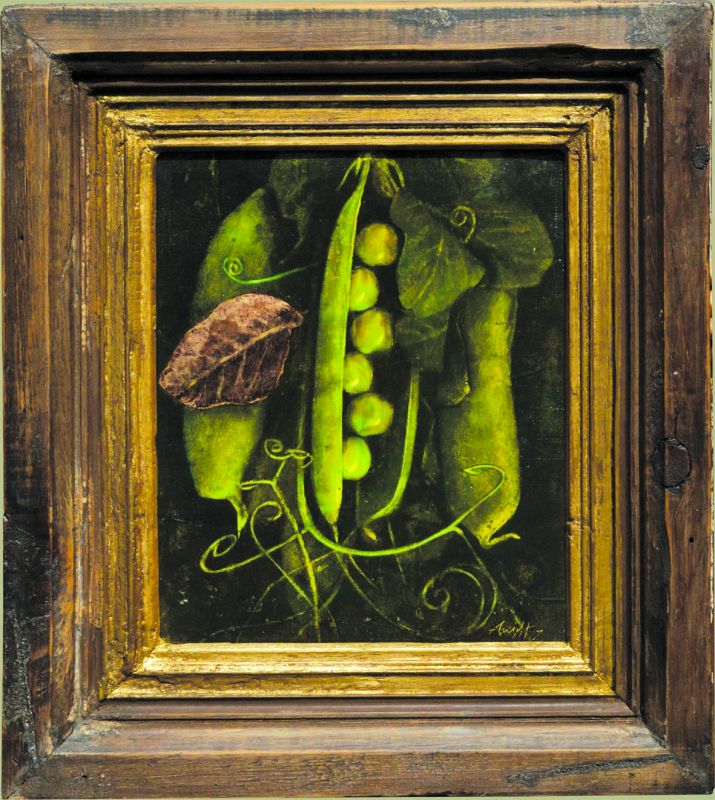 Rendered with gentleness, these works exemplify the artist's experience of reliving moments, embracing and celebrating them as a part of a bigger process, as a fragment of the continuously evolving and mutating existence. In his works, the mysterious and highly intriguing surface amalgamates, historical references, contemporary elements and leaves a blank space of widespread void for the futuristic nuances to fill it up. "I work with a strongly metaphorical, visual vocabulary which manifests boundless extents through minimalistic representations. The weathered, old and sensitively treasured excerpts/ of yellowed photographs, exemplifies the stilled moments of a bygone era. These reinstate the natural metamorphosis and inevitable erosion that happens with time," adds the artist who got inspired by his mother during his childhood. 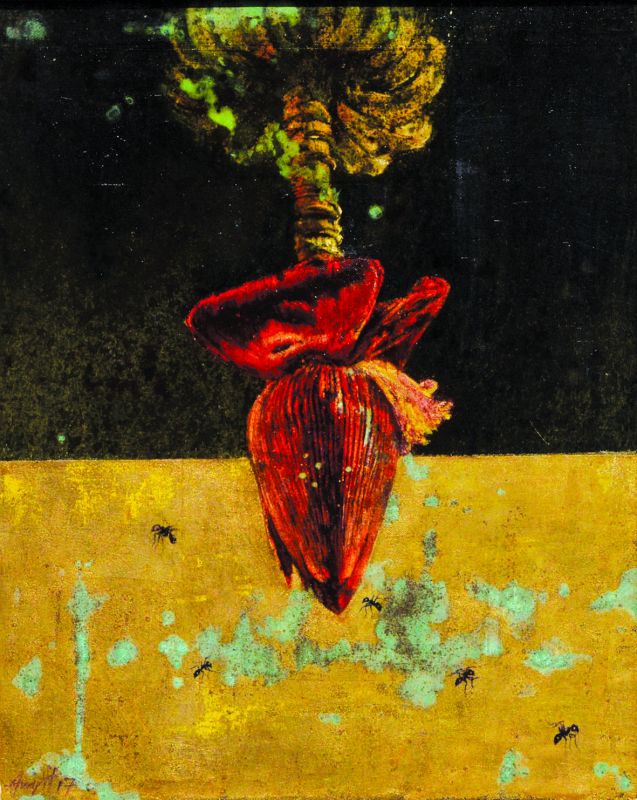 “I feel creativity is in my genes. Though my mother was mostly doing hand-stitched work like embroidery, I remember loittering around her all the time, closely watching the motifs and designs depicting nature. Though she passed away when I was very young, her works and her fond memories are with me till now,” says Dutta, an alumni of the City College of Commerce, Kolkata.

Among his artworks is a huge watercolour painting wherein the artist has drawn his self-portrait facing a sea front, with swans all around trying to reach out for water. The work is rendered in muted sepia tones, almost as if mourning the demise of nature from our lives. “I have only a positive message to give. Hence, you will see on one side of the canvas is a small window opens up to blue waters,” he explains. Other works have similar metaphors - drawn through the imagery of the banana plant, pea pods or corn fields - and the aim is to bring nature closer to us and indeed, vice versa.

Dutta loves painting in water colours and feels it is the only medium that can express nature so beautifully. "It's transparent, Indian and traditional. Oil is so dependent on weather and its opaque synthetic quality doesn't work well with my subject matter so I prefer watercolours," he says. Talking about how the art scene has changed over the years globally, Dutta says that today while there is lot of diversity in the art that is being produced, on the other hand, there is less focus. A few decades ago, artists used to take years before they could begin to have shows and exhibit in public. Now, the younger generation is too much in a hurry to make it. “Earlier, art was produced for art's sake, now most artists are worried about the market and what will sell. Globally, I feel there is a lot of experimentation that is happening in terms of street art, performing arts that allows the common man to interact with art,” he says. 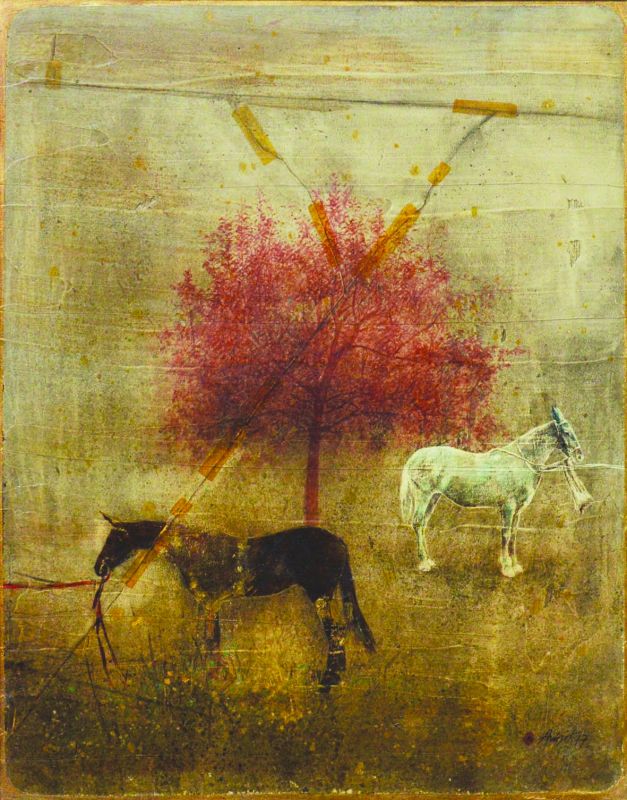 Ask him if art fairs help in bringing art closer to the common man and he says, "Of course. The fact that schoolchildren and general public is allowed entry is a great step. Going to a private gallery is intimidating for the common man and this is a welcome step."

An admirer of Tagore for being a pioneer of Indian art, Ganesh Pyne for being the rare artist untouched with the desire to make it big, M.F. Husain for being a multidimensional artist, Rameshwar Broota for being intense and Prabhakar Kolte for being a genius at abstraction, Dutta says these are the renowned Indian artists have made a mark on the international art platforms. "These artists have excelled in amalgamating the rich cultural and traditional aspects of their Indian roots with modernist and contemporary styles of expression. At present, various forms and genres of art are exhibited and viewed in India. The exposure and coverage the artists receive through various forms of media gives them a chance to bring forth their perspective to a larger group of audience," he shares.