My guru T.A. Rajyalakshmi was from the Devadasi tradition, says Chitra Visweswaran. 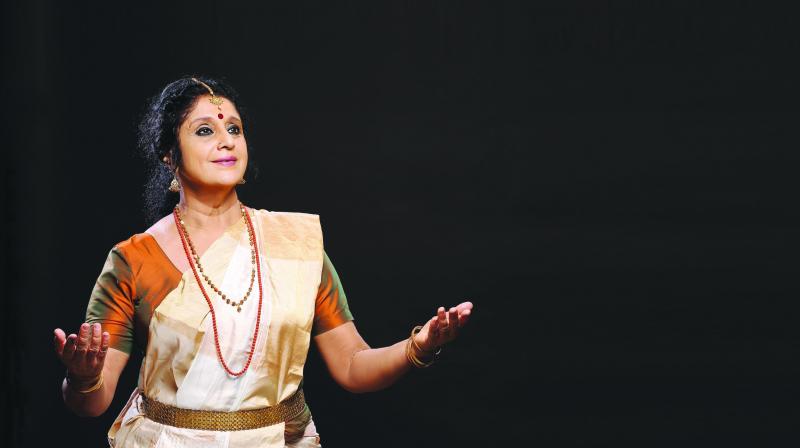 In the span of one week, Padmashri Chitra Visweswaran has received two Lifetime Achievement awards recently for excellence, from two very eminent organisations in Vijaywada and Chennai. This is not as surprising as it sounds, as truly, the achievements of this amazingly expressive artist are stupendous.

Regarded as the epitome of the highest expression of Indian culture, combining intense training with an erudite learned understanding of her subject, the guru is credited with having pioneered an individualistic style of Bharatanatyam; graceful and languid. Her dance combines the visual, aural cerebral and spiritual. In addition to Bharatanatyam she also learnt Manipuri dance and Western ballet, she trained under the great Tapas Sen in Calcutta and absorbed his secrets of light and colour, she has studied theatre, is an authority on choreography, is a composer par excellence, also paints and sings — the list goes on! But, in her words “we all dance, create movement, to find that silence within”.

It was an honour to interact with this legend whose values are truly inspirational. Excerpts:

Chitraji, congratulations on both your Lifetime Achievement awards. What do these really mean at this point of your life?
Every award reminds you that you have a great responsibility towards the art form; you cannot sit back and feel smug about what you have done. There is always more to do. At different stages in one’s life there are different phases — as a performer, as a researcher, composer, teacher — the thrust changes but the responsibility to give back always remains.

Would you say the diverse sense of your artistry was shaped by your experiences in the different places you have lived in?
Well, I lived in Bombay, then London, then Bombay again, then a few months in Delhi, (in the Nizamuddin area as I recall) then Calcutta. Finally I came to Chennai, and have lived there since. But more than the places, whose spirit I no doubt absorbed, and that broadened my outlook and vision, it is the people I was fortunate to have in my life.

My mother Rukmini Padmanabhan was an artist herself who taught me the grandeur of our art traditions, who taught me to soak in it, find strength through it in life. As Lord Krishna says in the Bhagavad Gita, in the second chapter: “karmanye vaadhika raste ma faleshu kadachan” (think only for the action, not the fruits of the action) — that was the guiding principle my parents taught me. Parents nowadays encourage you to come first, make a name — they harp on the end result. Actually the important thing is not the result but the effort, the commitment, the focus — that is what I was taught by the living example of both parents. This adds value to your art. My father gave me a questing mind. My brother is differently abled, and the attitude my parents gave me helped to deal with this too.

Later my spiritual guru Mathaji Vithamma, whom I have known from 1992, has also guided me immensely.

Of course artists have inspired me — the great dance gurus Kittappa Pillai, Kuppiah Pillai — their dedication, literally they were the dance, it was not just a role. That’s the difference between then and now. Also artists like Kamala Lakshmanji, Yaminiji, Vijayanthimalaji, M.S. Subbulakshmi, Allah Rakha. So many great writers, sculptors, painters…

The dance tradition you represent goes back several centuries. Tell us more about it.
In recent memory, the Marathas were great patrons of the arts — Shahji himself wrote Marathi compositions for Bharatanatyam — several “niruparnas”. “Niruparna” is a musical work in which every piece is in the same raga, and these works ran into several hours. Can you imagine the depth of musical knowledge, to be able to compose five hours of more of music in one raga.

In those days, the usual themes of the dance dramas enacted in the temples were simple — the typical dance dramas were symbolic of the human soul’s connection with the Paramatma, depicted through love stories. These stories, called “kuravanjis” would be about the love the princess, or heroine had for the Lord, and how this love story panned out. There would always be a princess, a God of the temple and a “sakhi” to whom the heroine would declare her love, and extol the virtues of the Lord. The “sakhi” is actually symbolic of the “satguru”. Usually, the “sakhi” would guide the princess to a “kurathi” — the fortune teller — usually a gypsy from the hills, symbolic of Goddess Saraswati, who would give her wise advice.

It’s interesting that the heroines were always called a “valli” which means a vine or creeper — the symbology being the heroine was very graceful, beautiful, needing the support and protection of the Lord to wrap herself around.

Your first guru was from the Devadasi parampara. Tell us about that.
My guru T.A. Rajyalakshmi was from the Devadasi tradition. She used to dance in the Mahalingam temple of Thiruvidaimarudur; she then came under the patronage of the zamindar there. My guru was called the young Balasaraswati, she used to do wonderful “abhinaya”. She was invited to Calcutta by someone in the Tagore family; she did not remember the name of her patron. By the time I went to her to learn, she was quite old and extremely simple, but I believe in her time she was a great beauty.
Many of the “devadasis” were very respectable, very dignified. They would be the concubine of only one patron. The wiles of a courtesan must have been taught to them; but they never spoke of such things to us young students. I began learning when I was 10, and my “arangetram” was when I was 11 only, and such things were beyond my understanding. But I do distinctly remember one occasion. My father was in the Railways, and at the time, some French officials from the French Railways were visiting Calcutta on work, and I was to give a small dance performance in their honour. I recall my guru trying to very subtly teach me certain swaying movements when I was to dance in front of them, and I didn’t understand why, but remember not much liking it!
In 1936, the Devadasi Act banned the dance tradition in temples. Now slowly dancing in temples is restarting — in Chidambaram, Kapaleeshwar. There is a readymade audience in the temples and I think it’s important for us artists to go out and be more visible as interest in the classical arts is diminishing.
I also trained under the great Vazhuvoor Ramaiyah Pillai.

Music and dance can be a huge unifier in today’s context. Do you agree?
In our country, the art forms are not for mere entertainment, they reflect our culture, our character as a people, our Bharatiya “sanskriti”. If we want to keep our identity alive, it can only be through our culture which is represented through our art forms. The feeling of pride in our heritage can only be through our art, and it is the youth that need to be aware of this, taught this as they will carry this forward.
Your question reminds me of an incident that has stuck in my mind. The Gulf War was going on, and I was performing in South Bank, London. Ustad Bismillah Khan was there too. I will never forget what he said “swar toh saat (seven) hee hain, sangeet dwara hee hum sab jur sakte hain”.

In fact, seven is really quite an important number in music — there are seven main talas too, in the Carnatic system too. I have used “7” as a theme; I composed “Saptasapti” (7 types of 7) using the Saptagiri (7 hills) of Srinivasa as the central theme. All my compositions have been on what inspires me — be it the life of Meera (Meera — The Soul Divine), the parallels between her and the Saint Andal, or Stree Shakti, a saga of women of India from Sita to Ahilya Bai, the Rani of Jhansi.

You have a huge legacy — your many students who are recognised leaders in their field today, (three of whom have been awarded the Sangeet Natak Akademi Yuva awards) as well as your numerous dance productions, which had several innovations including the use of flashback, use of group formations, abandoning the use of costumes. Which do you think will prove to be the lasting legacy?
I think my focus, and attitude towards art that I hope I have been able to convey and inculcate. Not just to my own students, but through my life, my dance, my compositions. I always say: “Dance not for name or fame, dance is but a prayer.” People don’t like the word prayer, but prayer is just the focus, the concentration, the internalisation.

Tell us something about your world of arts today that makes you smile!
A silly thing really! Bharat, our country is named after Bharat Rishi, yet I have seriously heard the explanation that in “Bha-ra-ta”, the “Bha” stands for “bhava”, “Ra” for “Raga” and “ta” for “tala”! Actually in an 11th century Sanskrit play by Vedanta Deshika, the comedian makes this statement facetiously, yet today I have heard it quoted as gospel!

(We parted on that frivolous note. My mind still in awe about the magnitude of this artist’s breath of vision)