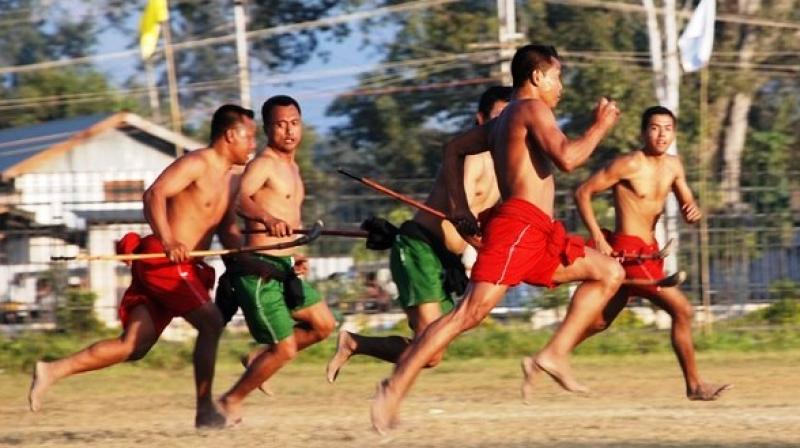 Manipur's local sport, Mukna Kangjei is akin to the modern day hockey and people of Manipur have been playing it since time immemorial. (Photo:ANI)

Imphal: In the history of Indian sports, traditional or native games reveal a lot about the culture and the people of the place.

In the context of the modern world, everyone is busy exploring new technologies; gadgets and video games have overshadowed the traditional local games. These games have lost their sheen and we often tend to forget their importance.

India has a rich culture and history and each state has its own local sports. One such game of the state of Manipur is Mukna Kangjei. It is akin to the modern day hockey and people of Manipur have been playing it since time immemorial.

“We are trying to revive our traditional games which are gradually dying. So with this purpose, we have organised this tournament to restore the sport,” said, TH. Basantakumar Singh, Organising Secretary.

Popularly known as ‘Mukna’, the game is a combination of Kangjei (hockey stick) and Mukna (a form of Manipuri wrestling). The game is played only by the natives of Manipur and it is a great fusion of traditional wrestling and hockey. The Kangjei stick is made up of cane and the Kangdrum (ball) is made up of seasoned bamboo roots.

“We truly want to give credit to the organisation for organising this tournament. In the future, we want to work more and participate in greater sports events,” said, Elendro, one of the players.

“It is a traditional and ancient game of Manipur,” said Najma Heptullah, Governor, Manipur.

It is worth mentioning that the origin of the game dates back to Aniconic worship and during the celebration of ‘Lai Haraoba’, Mukna Knagjei was played to mark the end of the festival.

Mukna Kangjei is a game which requires enormous physical stamina, speed, and agility. It is played by two teams, each consisting of seven players. Each player holds a cane stick, about 4 fee long, to play the ball made of seasoned roots which are approximately four inches in diameter.

The game starts by throwing the ball at the captain of the teams, who stand facing each other on the line in the centre of the field, which is about 200 x 80 yards in the area.

The players generally wear Mukna Kisi Phijet (dress of cloth knot) for protection, and hold on to each other.

Organising such tournaments will not only preserve the rich legacy of the state of Manipur but in the long run, it will help retain its charm despite the popularity of other modern games.