Not just a child’s play

Katie, who’s a passionate lover of nature & a freelance teacher, has penned books like Birds of Different Feathers & Odyssey in the Ocean. 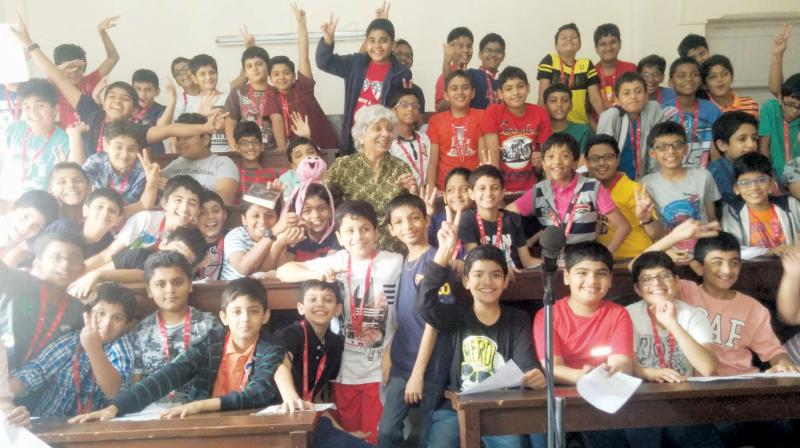 Children’s author Katie Bagli is of the opinion that in order to be a good writer, one must be a reader first. “When it comes to getting children themselves to want to write, you need to make them feel the love of books first. It’s only then that the kids will want to write something of their own,” she says.

Katie, who’s a passionate lover of nature and a freelance teacher, has penned books like Birds of Different Feathers and Odyssey in the Ocean. Now, she is set to host a 16-session workshop for young budding authors, helping them polish their creativity on paper.

“The sessions are divided into two different age groups. One is a younger lot, because parents have approached me for kids even as young as seven! So, kids between seven and nine years of age make for one group, while those between 10 and 13-years make for another lot,” she explains.

The way to triggering the child’s creative mind is through gamification of the tasks in hand, Katie believes. And to that end, her sessions will consist of quizzes, puzzles, and games like dumb charades, which she says hones the imagination in a child. “I have a lot many games lined up for the sessions,” she says. “For example, pretend there’s a person missing. Imagine him and make a poster for him. Then, I also give the kids various faces with different facial expressions. I ask them to write little dialogues in the speech bubbles provided for them. Then come questions like what would this person want to say to the reader? What do the kids think his name could be? Another favourite is to read passages and work around it. If Roald Dahl has written a magic spell, we read the passage, and then the kids go on to write their own spells!”

Katie is quick to clarify that her sessions have nothing in common in what school is like, especially since summer vacations are a time for the children to step away from all things academic. “Basically, the idea is to make children realise that writing can be great fun too, and to inculcate the love for writing, and the passion to do so within them. They will ultimately publish a little booklet with their work in it. Hopefully, they’ll feel proud of their work, and that’s the aim. I’m going to look for creativity in the kids; I won’t bother much about the spellings,” she chortles.

It’s not easy writing for the new generation of kids, who have been brought up on a diet of mobile phones and technology, sighs Katie. “Basically, there’s a lot of distractions in the young lives. I’ve seen little babies’ parents giving them mobile phones with games on it, just so they can distract the child and feed them. Right from the start they’ve been given electronic objects, so how can you expect them to show interest in books?” she asks.

Her approach to keeping children hooked to her books is simple — open up new vistas for them. “Look, it’s not easy to write for children,” she says. “You have to keep in mind the language, and at the same time — at least I think this — you can use words that can help them learn something new. You can’t just restrict yourself to the vocabulary that they already know. They have to learn something new too. So use some words that may be a little difficult, but they’ll understand from the context and the flow of the sentence. Of course, you can always have a little glossary in the end.”