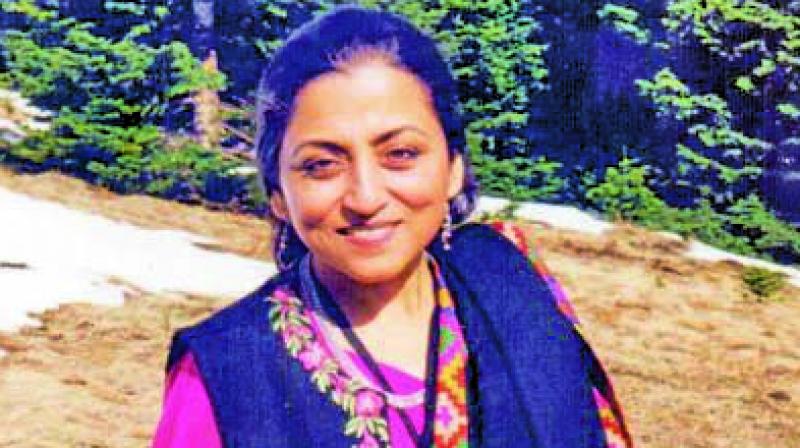 Noted journalist Madhu Kishwar has landed bang in the middle of controversy after she lashed out at an actress on social media recently. When Divya Spandana, a Kannada actress, was appointed head of Social Media and Digital Communications of the Congress, veteran journalist Madhu Kishwar said on social media, “RAHUL-MALLYA LINK OUT: SPANDANA WAS RCB AMBASSADOR. And, we know the kind of women found favour with Mallya. No wonder she rose so high so fast in Congress. Rahul Baba proves his taste is as immaculate as Mallya’s (sic).”

While Divya has maintained a dignified silence, refusing to be drawn into an ugly war of words, Twitterati has slammed Madhu. (see box on far right)

Interestingly, as Madhu is a BJP supporter, none of the women BJP heavyweights who occupy very powerful positions, uttered a word against her. Surprisingly, filmstar activists like Sonam Kapoor, Swara Bhaskar and the likes are all mum, too. When we asked a few prominent actors what they had to say about a woman being shamed like this, their answer was, “No comment.” 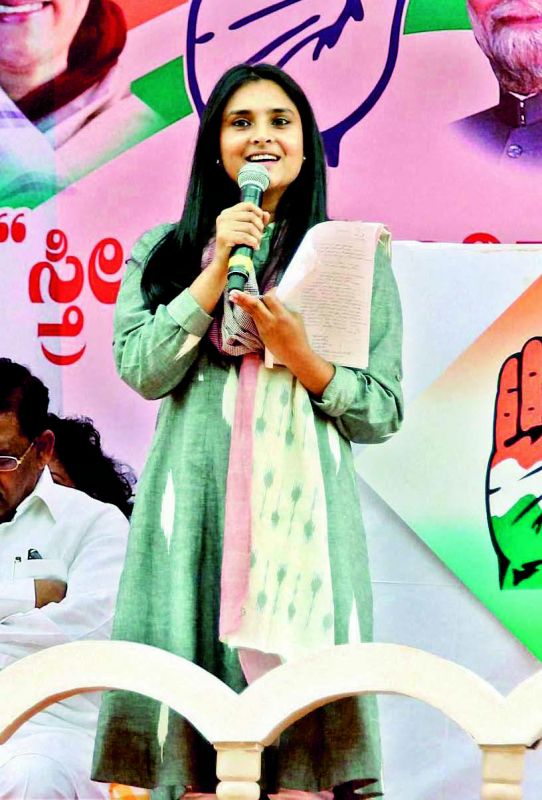 Abha Singh, a noted lawyer, says, “There is a saying, ‘A woman is a woman’s worst enemy’. I would request women not to pull each other down. It is a fact that she was the spokesperson for Mallya’s team, but to say that she has risen so high only because of this is unfair. Divya Spandana is doing a good job on social media. We should not run her down. The statement Kishwar made was defamatory and Divya can always file a defamation case under section 499 of the IPC.”

While a few suggested that Kishwar is in need of therapy, a twitter user, Aparna wrote, “Please don’t label Madhu Kishwar as clinically insane or retarded or psycho, because she is neither of it. Labelling her as someone in need of therapy takes away her accountability for spewing such venom. Not only that it does great injustice to people actually suffering.” 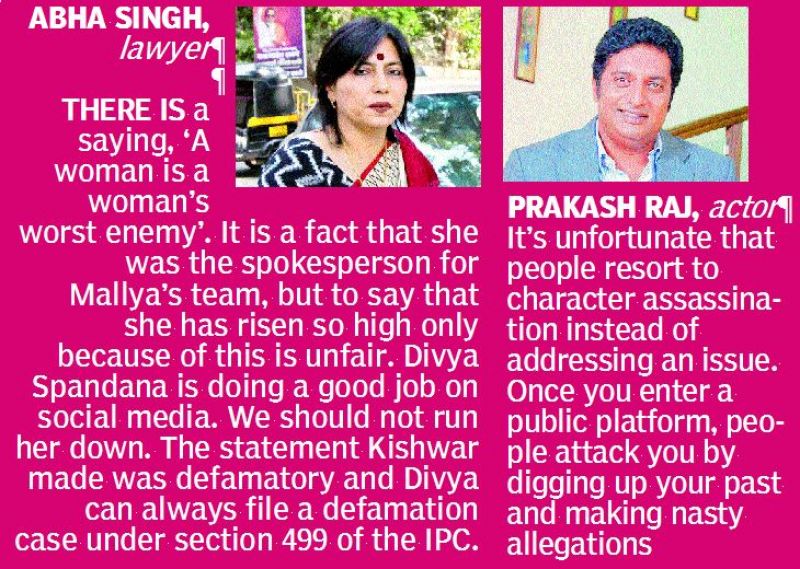 Sudha Ramalingam, a lawyer and activist agrees that women often cast aspersions on another woman without any basis or justification.

“It is high time that women in public life are not painted badly due to their proximity to any male counterpart. Such utterances by a woman demeans all other women too,” she says.

Actor Prakash Raj, who is in the forefront of several issues, says, “It’s unfortunate that people resort to character assassination instead of addressing an issue. Once you enter a public platform, people attack you by digging up your past and making nasty allegations.”

Divya Spandana has admitted that she was the brand ambassador for RCB and was a close family friend of Vijay Mallya. She’s not hiding that fact. And people commenting on that is not objectionable. What Madhu Kishwar said is.

Meghna Pant, author and feminist, is critical of Madhu. “It is a clear case of pulling a woman down by passing personal comments, that too, when you proclaim that you are a feminist! Madhu is an intelligent woman, but here her choice of words is wrong. Women are on top of the game in every sphere. She should not forget that these sorts of comments reflect her attitude and it is like passing her own blanket to others. It is dismissive and regressive. She should apologise for her comments,” she said.

Twitter users slam Madhu Kishwar
Rohini Singh @rohini_sgh
The truth is @divyaspandana has considerably improved the Congress’ social media presence. Even her worst critic will concede to that. Its unfortunate that women are seldom judged on their capabilities but on salacious rumours and personal choices.

Padmaja Joshi@PadmajaJoshi
This is disgusting. The oldest trope in the world. A woman who ‘rises fast’ in any organisation *must* have done it through means other than hard work

Vishakha Joshi@VishakhaJ18
I am no fan of @divyaspandana, but assassinating her character and passing sly comments is not done. “What kind of women...” what kind of statement is that? Have you raised this question about mallya’s business associates? Cricketers of RCB etc... ?

Dipali Sikand @SikandDipali
What a rotten cheap way to get a few thrillers for your self. Nastiness compounded and totally classless. @divyaspandana sue this woman We are with you

Barkha Dutt @BDUTT
You madam are misogyny inc. hateful low level tweet. @divyaspandana should sue you. But then you are beneath contempt.

Javed Akhtar @Javedakhtarjadu
Language is not just a vehicle to carry an opinion or information from one to another. The choice of words, metaphor and similes tells you all about the speaker’s class and upbringing.

Pallavi Ghosh @_pallavighosh
@saikatd As I say a woman often does more injustice to another woman..

Sujata Anandan @sujataanandan
Madhu Kushwar u r the most despicable cretinous creature on earth. You are not even worth the Manushi magazine u ran for years if this is the low level of thinking you have about fellow women, first @smritiirani now @divyaspandana. It’s not BJP or Cong. It’s simply a foul mind.