Coorg is a scenic place and doesn’t fail to charm the visitors ever. 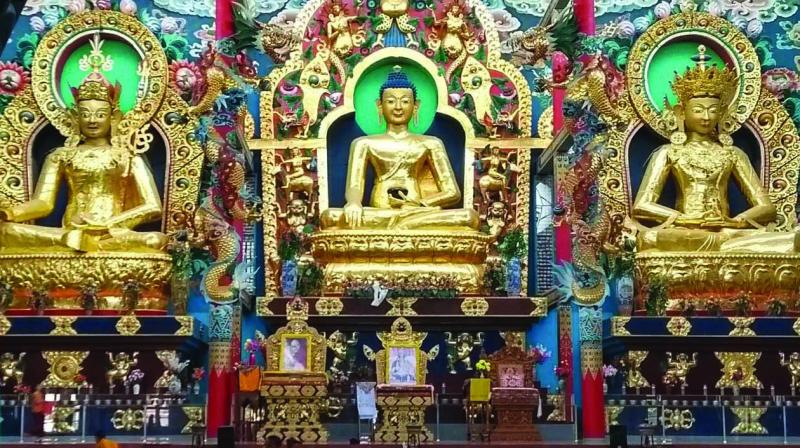 Madikeri in Coorg, better known as Kodagu, was the summer escape this time. A quick scan of the net showed verdant valleys, brimming waterfalls, rolling hills and acres of coffee plantations. We opted to take the rail route to reach the nearest point. So before the clock struck midnight, on a hot April night we boarded a train headed to Mangalore. And from there, we chose the road to reach Coorg. The first emotion was disappointment — the sun was shining down and the roads were dusty. “Where is the cold weather?” was the first question and that remained unanswered till we left Coorg after three days. Lesson learned— never visit Coorg in the summer.

Day one dawned bright and sunny and we decided to take a guided cab tour around the city. The first destination was Omkareshwara temple. The temple overlooks a huge pond — home to ducks and huge carp fishes. The Shiva temple has a fascinating mix of architecture — Gothic and Islamic. Legend has it that the Shivalinga installed there was brought all the way from Kashi. After feeding the fishes, the next destination was the famous Abbey waterfalls. The trek to the waterfalls is long, along fenced steps.  The huge bags placed every few metres to deposit trash were a welcome change. (Incidentally, Coorg is a plastic-free region). 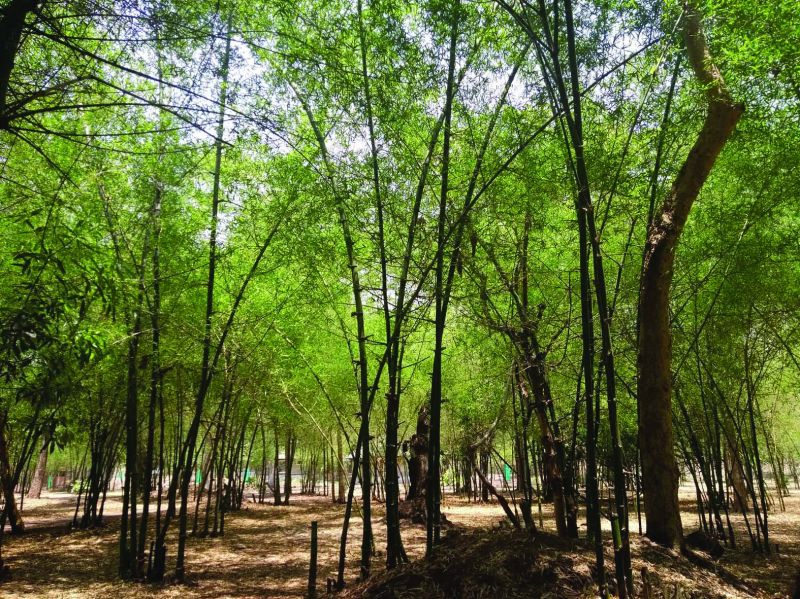 The sound of the waterfalls can be heard before it comes into sight — an 80 feet waterfall that gushes down amid the greenery of a forest. After soaking ourselves in the sight, we trekked back to the parking space with monkeys chattering in the trees overhead.

Raja’s Tomb was next which contains the mortal remains of the royal Kodavas. There are not one, but three tombs in the beautiful manicured lawns that surround the tombs, built in Islamic style with tombs at the centre and turrets at the corners. The entrance to the tombs has Nandi figures carved on top of the corners. Though it was blazing hot outside, the interior of the tombs were very cool— almost an air conditioned feel—thanks to the marble flooring and the clever air vents. From there we visited the Madikeri fort. This is supposed to be a fort rebuilt by Tipu Sultan and now has government offices functioning inside. The turrets and ramparts of a bygone majestic era are still there with life-size statues of two elephants catching the eye.  There is a church and a museum which has an interesting display of weaponry and articraft used during the Tipu Sultan era. 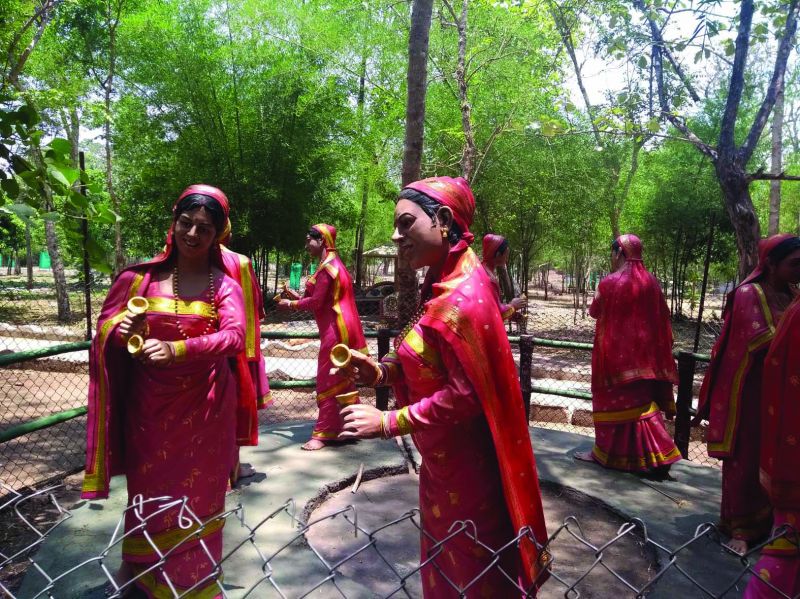 We then made our way to Raja’s Seat which is a park filled with gardens and artificial fountains and was once a favourite of the kings of Kodagu. This is built on high ground with a view of the valleys down below and it is a sight to see the sun rising early morning or setting in the evening with the mist swirling in gently amongst the majestic trees. There is a toy train for children filled mostly with families. Though not well maintained and unclean, it is a nostalgic ride through man-made tunnels with the train whistling merrily, offering a view of colours from blooming flowers and thick flower laden vines. Thus concluded day one.

The next day’s iterinary was a trip far from the city. The first stop was the Nisargadhama forests, the entrance of which is through a hanging bridge above gushing waters. I was asked to dispose off a plastic packet of chips in a trash bag before entering the forest. There are tall bamboo trees and carefully placed life size depictions of Kodagu life. The sprawling forest area is a soothing refuge from the heat. 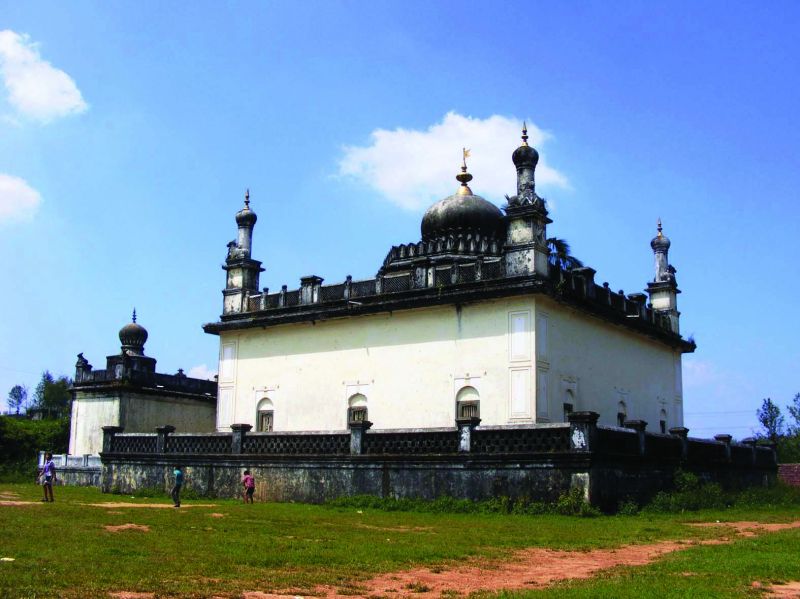 The next destination will be etched in memory forever —the Dubare elephant training camp. The road to the camp was closed for repairs necessitating a bone-breaking, jarring, wild and dangerous trip in an auto through a narrow road with steep ditches on either side. The camp has to be reached by wading through knee-high water along slippery sedimentary rocks— quite an adventurous feat. The elephants could be seen bathing in the water with teenaged mahouts atop them.

The pachyderms can be seen at close quarters, even touched or rode on in exchange for money. The famed Namdroling Monastery and the Golden Temple were the other highlights of the trip with the majestic statue of the Buddha being awe-inspiring. There is a sense of calm and peace pervading the monastery with the chants of prayer having a tranquil effect. 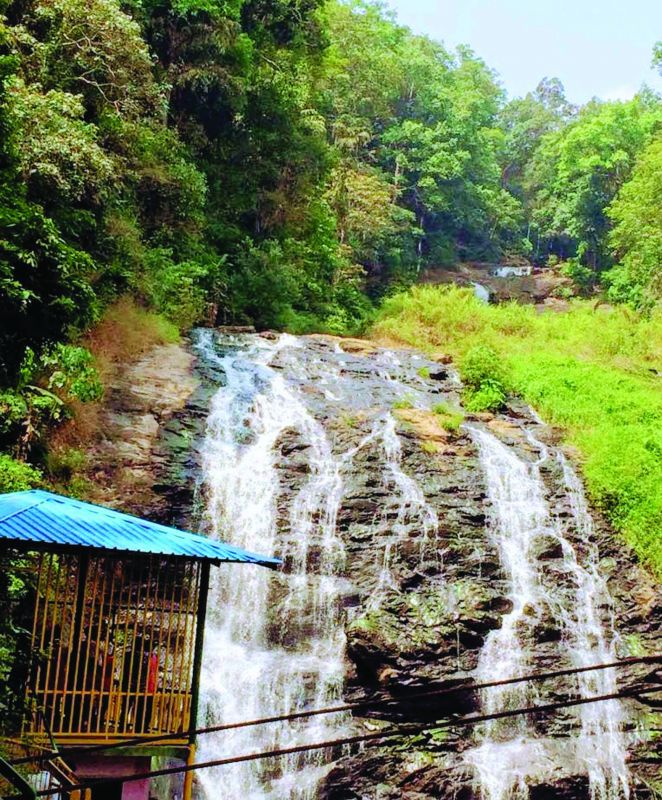 We returned home laden with packets of coffee, sweet honey and wines made from betel leaves.