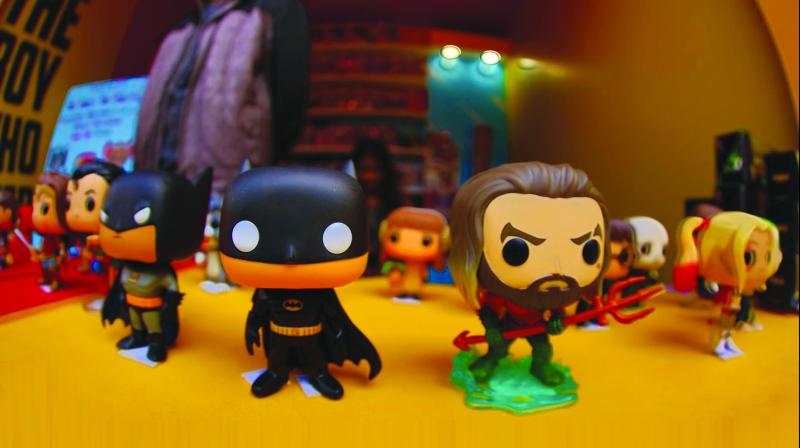 CGI artist Akshay Churi says that he started cosplaying four years ago and his first cosplay was Batman from the ‘Dark Knight’ trilogy.

A fest where geeks and nerds drool, has surely etched its name in the history of pop. With the rise of Comic Con world over, the popularity of costume play also known as ‘Cosplay’ has gained traction among youth.

Akshay Churi, the 2019 Cosplay champion and celebrity is the big attraction at Comic Con. Full of life and high on energy, the popup show gives a chance to celebrate popular culture in trademark style with the best of cosplay, fan merchandise, fun zones, and more.

Curated by the producers of the iconic New York Comic Con, the show offers a fascinating array of experiences, from an interesting compilation of activities to merchandise and toys, from franchises, immersive experiential and gaming zones to cosplay, there’s a lot to be explored over three days.

The key exhibitors at the PopUp show will include Planet Superheroes and Funko – By Wizplex. Akshay Churi, the winner of Maruti Suzuki Arena Indian Champion of Cosplay (ICC) 2019 and fan favourite winner Shine Saha (Cosplaying as Gipsy Avenger), along with some of the leading cosplayers in the country will be a major draw at the show. Thrilled to introduce this mini version of the iconic pop culture extravaganza to fans, Jatin Varma, founder of Comic Con India, says, “Considering the ever-increasing popularity of Comic Con across India, we decided to roll out our first ever PopUp Show in the city from where Comic Con India started off as an experiment in 2011.”

Akshay Churi (Cosplaying as Jim Raynor) will be competing with cosplay champions hailing from countries like USA, Australia, China, France, Austria, Singapore, and Indonesia to win the coveted ‘Quest for the Crown’ 2019.

CGI artist Akshay Churi says that he started cosplaying four years ago and his first cosplay was Batman from the ‘Dark Knight’ trilogy. “I cosplayed this year as Jim Raynor from ‘Starcraft’. The armour is called marine armour and stands 8 feet tall. It is more comfortable than it looks. This was a challenging build and I focused mainly on maximising mobility, visibility and detailing.” The first day at the mini event gave all attendees a chance to celebrate popular culture in trademark style with the best of Cosplay, fan merchandise, fun zones, and more. The event garnered a lot of traction and witnessed many visitors as the entry to the event was open to all and was completely free of cost. Jatin Varma feels the fun part about Comic Con is that people pay to come and Cosplay. “You have to buy a ticket to enter.”

“If you are a fan and want to make it to Comic Con one of the best things to do is Cosplay. We have cash prizes of 50,000 for the national championship everywhere. The competition is always online but last year what we did is getting all the runner ups to come to Delhi,” he says adding, “Cosplay has been growing since last nine years, and in the past three to four years it has taken off very well. We have an Indian championship and have taken it to the international level so that the Indian kids get to compete with Cosplayers abroad. The kids get into costumes and tailoring as well. So the challenge is that an amateur is going out there after making his own costume as well. I have seen them stop doing what they are doing and taking this up as a profession. If not a full-time profession, something that is more than just a hobby. Which is why we made it international. With our international partners we created this global championship. The good and interesting part of the Indian scene is that everyone is beginning to get interested in it,” he explains.

Akshay Churi (the winner from Mumbai) who will be representing India at Cosplaying in Chicago said that there is always hope to win and he took up the challenge positively. He said, “There are a lot of Cosplayers so competing with them is not easy but still an honour. Winning amongst them is my achievement, he adds. I spent 40 to 45 days, four hours a day approximately to build the costume.”

The Cosplay culture in India has been growing and now it’s not just for fun involves serious money. Comc Con is a platform, a championship, something to get excited about, says Varma. “There are clubs everywhere, and we just started the fire and it spread everywhere. It is staggering to see the number of people and from that perspective it is growing very fast. In the first Comic Con, I Cosplayed and made everyone Cosplay On an average now we have a large number of people Cosplaying, I think more than 2,000.”

Talking about his journey and how the idea germinated he recalls, “I was a publisher who published comics in India and across Asia, but people still cribbed about not getting a platform.”

“Also at that time I was producing television shows, and I was a vendor in the industry. I thought I should have something of my own, curated by me. Comic Con was an idea that was not in India before and I just jumped into it. I just had a content background as well as a bit of events background,” he adds.

Social media, he says, is the core marketing strategy. “It is how we connect with fans, and they interact with us. That is how we get a large footfall in our shows as well.”