Mining’s latest victim might be the Bannerghatta National Park. 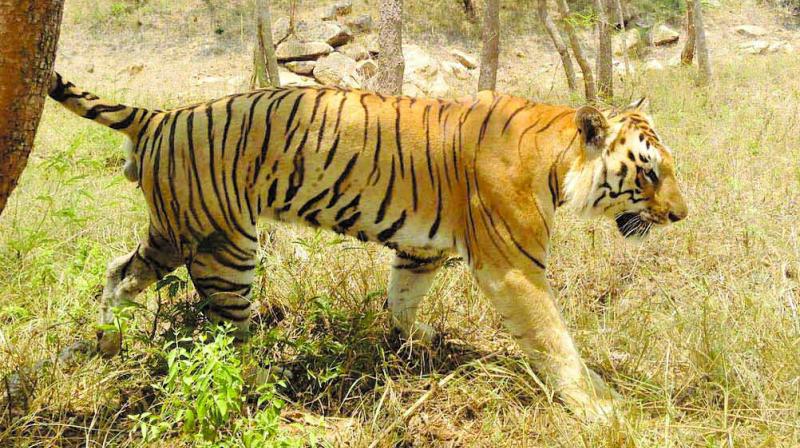 A photograph from the Bannerghatta National Park

The cry is tumultuous. The mood is one of anger as people speak out against this latest move that threatens the Bannerghatta National Park. An escape for all from the hustle and bustle of the city, the park is an oasis for all. Now, it is in danger from the mining industry. According to reports, mining interests will cut into 100 sq km of the park. People are shocked. Activists are livid. And our forest, wildlife and natural habitat is under grave threat. This move will have a serious impact on the animals that migrate to the park, say many city experts. The mammoth loss of bio-diversity will make us poorer, and it will also affect the already reeling climate. The horrific and atrocious plan will be the death knell for the environment. Even as United Bengaluru and Jhataka.org have started campaigns that have received the support of more than 3,000 and 8,000 signatures, respectively, it is upto the citizens to create an uproar to put an end to this plan.

Former member of the Vision Group & CISTUP, IISc, Vivek Menon says, "Shrinking the green cover in the name of development is regressive thinking. The key to reversing climate change is afforestation, not deforestation. Since the fence is eating the crop, it’s time we stood up to this atrocity and changed the course, so that future generations may benefit from our actions. While urbanisation is a reality, it cannot come at the expense of our environment!"

It can be recalled that the Kudremukh area was also under threat from mining,  and the Kudremukh National Park-Iron Ore mining controversy went on for a long period before it was resolved in 2010. Toda,. it is one of the most serene and beautiful mountain ranges located in the  Chikkamagaluru district with vivid biodiverse natural habitats. If things do not change then Bannerghatta will be no different from how Whitefield is today, feels activist Sandeep Aikyam. He goes on to add, "The moment you allow degradation of greenery and also commercial business to take over, the entire place is lost. Places like Whitefield, Ring Road and Electronic City were all under the green buffer zone, and now it’s a concrete jungle. If you remove a green buffer zone, it becomes an IT park. The nature of the city is to keep expanding and it goes on. So if we don't stop it at this point, Bannerghatta will have the same fate. It is just a matter of years for a place to change completely. What the government can do, is to offer an alternative and sustainable way of building without going into the lush forests."

Manjunath Janakiram, an environmental activist feels that if this continues it will cause a lot of problems for us as well as the animals that migrate to the park. He says, "There was a high court order that demarcated the boundary of the mark. There was also an order that nonforestry activities should not take place within one kilometer of the park and this was never seriously implemented. If we loose this space we will have serious problem of water scarcity and pollution. This is the last bastion for animals that migrate from Annamalai Hills, Coimbatore and Kollegal regions. The herds that come are assured of some kind of vegetation with a dry terrain that is good for browsing. If this continues, there will be loss of habitation that will cause problems especially for elephants as they need a vast browsing space."

Kshitij URS who works extensively with water conservation says that it is not only water that will be effected but also the entire biodiversity of the place. He adds, "When an ecology like the Bannerghatta Park is destroyed, the entire cycle goes for a toss. Bannerghatta acted as a physical and ecological buffer against Bengaluru’s extension into the south towards Annekal and Sarjapura. Places like Lal Bagh and Cubbon are minute compared to Bannerghatta in terms of size and bio-diversity. This encroachment means that the ecological cycle gets lost that is more 260 square kilometers which is more that 1/4th the total area of Bengaluru. It will lead to further global warming and climate change. The micro-environment in Bengaluru will be drastically affected."