Environmentally-conscious couples are choosing to have eco-friendly weddings. Here’s what makes their celebrations unique... 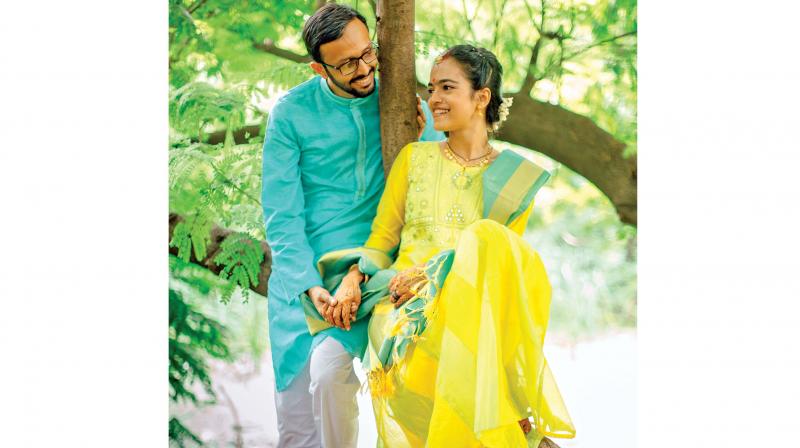 Big fat Indian weddings are all about song and dance, raucous guests, sartorial opulence and of course, delectable, not-easily-digestible food. However, of late, they are also becoming a platform to voice a message, to make a statement about a way of life that will soon become crucial to our survival – that of inculcating eco-friendly habits in our lifestyle. Many environmentally conscious couples are choosing their D-Day to spread awareness about nature-friendly behaviours, and the best part is that they are doing this by planning eco-friendly weddings.

Eco-friendly alternatives
WHILE it takes years for a tree to grow, the sturdiest tree can be chopped down in a few minutes. And so, to reduce the use of paper, many couples are using e-invites instead. Some are even looking at biodegradable options to reduce waste. Actress Rubina Dilaik, who recently tied the knot with long-time beau, Abhinav Shukla, opted to give eco-friendly invites. Rubina says, “We decided to not give invites that people would throw away, contributing to garbage. So we gave biodegradable invites made of MDF wood and recycled paper.” In the past, Sonam Kapoor Ahuja and Anand Ahuja too had opted for e-invites to prevent wastage of paper. Rubina and Abhinav also gave diamonds a wide berth. “Abhinav strongly believes that diamonds are blood diamonds. So, no diamond jewellery was used in our wedding,” says Rubina.

Bangalore-based couple, Sharanya Sridhar and Susheel Joseph, who took the plunge in February this year, traversed a similar path. Sharanya says, “We got seed paper invites. Seed papers are eco-friendly papers that are filled with seeds. We asked our guests to note down the information and then rip the paper and plant the seeds.” 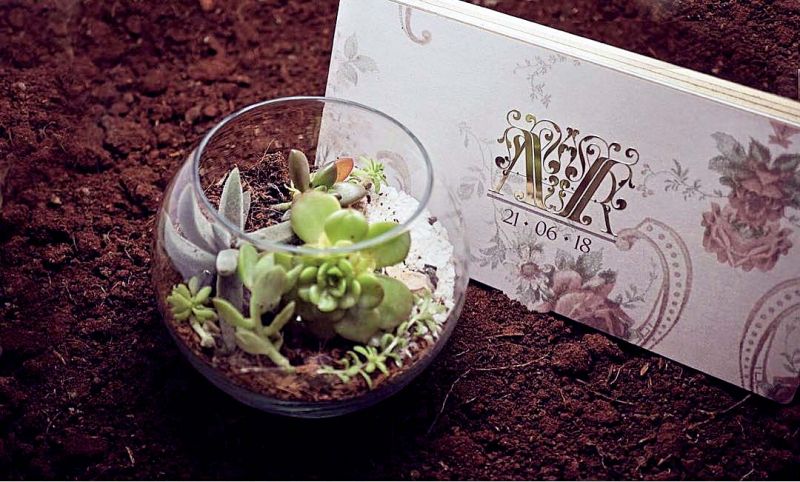 Apart from invites, couples are also opting for eco-friendly materials when it comes to decorations. Sean Fernandes and Avril-Ann Braganza asked guests to throw flower petals instead of confetti as the latter is made of thermocol, which is non-biodegradable. Pune-based Chetan and Poonam Gaikwad opted to use steel plates and glasses instead of disposable cutlery.

Greener gifts
To make a statement, we opt for flashy return gifts. However, these gifts often remain locked in our guests’ cupboards, doing nothing for the giver or the receiver of the gift. To sidestep this problem, actress Rubina and hubby Abhinav decided to give planters as a token of appreciation. “My parents are from a farmer’s background and we like planting trees. So, we gave our guests succulents, which are low-maintenance plants,” says Rubina.

Mumbai-based Prashin and Deepa decided to distribute seed balls as return gifts. “It’s a ball made of mud and cow dung, inside which, there is a seed. It has enough nourishment for the plant to grow by itself even if it’s just left in soil. All the seeds were of indigenous tree species,” explains Prashin.

Sharanya and Susheel, on the other hand, gave out bird feeders to friends and family. “It’s shaped like a lantern. You fill it with bird feed and leave it outside your house. People have told us that they love the gift because it has helped them see different kinds of birds,” says Sharanya.

Reuse to reduce waste
This desire to reduce waste by using reusable items is common among those eager to have an eco-friendly wedding. Prashin Jagger who married his sweetheart, Deepa Kamath, this June, says they avoided the use of disposable plastics by opting for reusable plastic cutlery offered by the caterer. Prashin makes an important point when he says that being organic is not synonymous with being eco-friendly. “There’s a misconception about what eco-friendly means. Using cornstarch or supari plates or bowls made of leaves can actually be detrimental, as resources like water, plant material, and fuel are utilized to make these goods. Thus, reusable plastic plates are more eco-friendly in this case. One must always be aware of what one is using, where it’s coming from and where it will go,” says Prashin.

Similarly, Sharanya and Susheel too instructed their wedding planners to use plastic decorations they already possessed instead of buying new items. “We didn’t use tissues either, as guests were encouraged to use washable napkins instead. We also handed out glass bottles to remind people that disposable plastic bottles are harmful and create a lot of waste,” says Sharanya.

Another couple that opted to minimise waste by reusing a lot of their wedding decorations is Daniel and Rebecca Pearson. Talking about their 2016 wedding, Daniel says, “Ropes used for hanging wedding decorations were later used at home to hang wedding pictures. We had made signs using wooden boards lying around and later, used them to hide patches of peeling paint in our home. Our centerpiece is now used as a flower vase. Also, instead of using a cake stand, we had used mango crates, which we returned to the seller after the wedding.”

Awareness through activities
Apart from infusing their wedding with eco-friendly options, couples have also tried to inform guests about nature-friendly habits by organising fun activities during the wedding festivities.  Sharanya says, “We did not like the idea of performing rituals, so we opted for a tree plantation drive instead. Guests were invited to plant seed bombs in an area we had cleared.” The couple also held a pot-making event to encourage guests to use natural items instead of plastic. 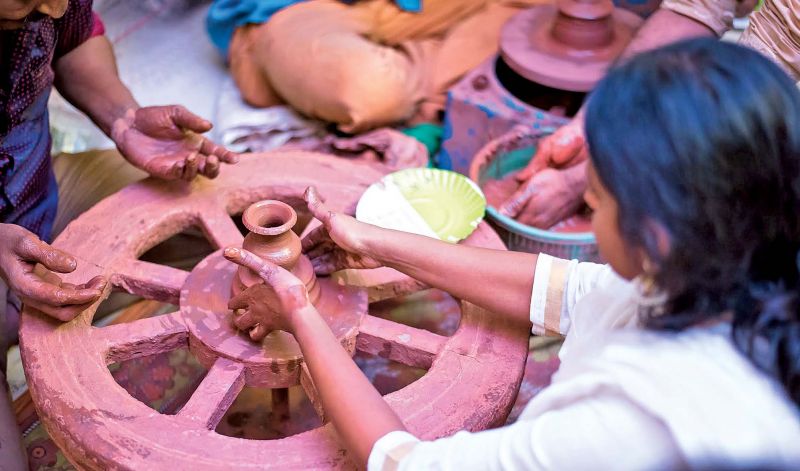 Prashin and Deepa, on the other hand, stuck posters to create awareness about food wastage. “We wanted to encourage people to eat consciously. But, we couldn’t say that outright, so we wrote these quotes about food to draw attention to the fact that the food we’re eating is precious,” explains Prashin. The couple also created placards from old papers and cardboard to explain the eco-friendly ideas they had incorporated into their wedding.

Chetan and Poonam Gaikwad encouraged guests to drop in a small contribution in their donation box. The money collected was donated to NGOs working towards preserving the environment. “We also didn’t have lavish celebrations, burst crackers or hire a DJ. The money saved was given to Vasundhara Swachata Abhiyan, an NGO that promotes sustainable living,” says Chetan.

There’s a need, there’s a way
While eco-friendly weddings are not yet the norm, they are definitely the need of the hour. Prashin vouches for this thought by saying, “I’m a freelance photographer and shoot a lot of weddings. So, I’m familiar with the amount of waste weddings create. It’s beyond what a household will create in six months.” Chetan Gaikwad too stresses the need for eco-friendly weddings as ‘we don’t have another planet. If we keep destroying it, there would be no other place for mankind to live’.

Though planning an eco-friendly wedding can have obstacles, they aren’t ones that can’t be overcome. The biggest hindrance remains, as Prashin says, the ‘log kya kahenge’ thought. “We want to please our family and this thought prevents us from doing the things we want to. But, as long as you’re perseverant, patient, willing to ask questions and communicate, you will be able to find and use eco-friendly alternatives,” insists Prashin.

Tips to have an eco-friendly wedding

Instead of thermocol decorations and flexes, use colourful cloth décor and reusable props

Use seasonal florals from local vendors rather than imported ones

Opt for LED bulbs and lights 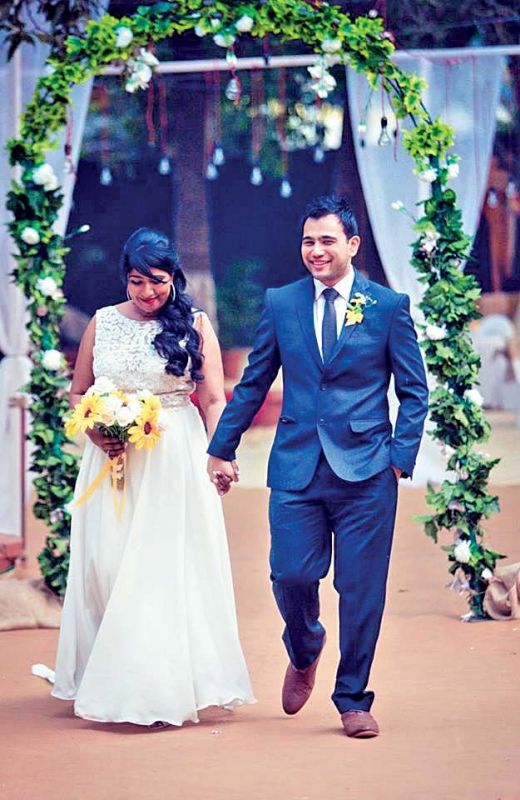