The rise in the number of organic cafes and calorie-conscious restaurants are transforming the food scene in the city. 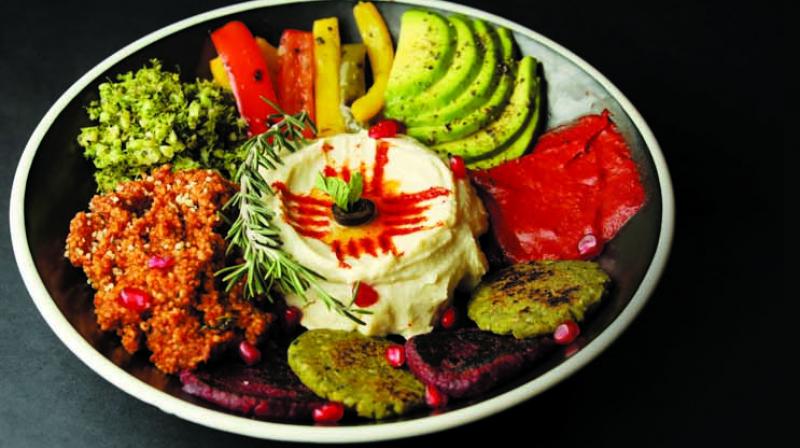 Vegan cuisine at most restaurants has earned the bad name of being too pricey, but not anymore.

Thanks to Mumbaikars’ zeal to become healthier and fitter, the demand for healthy menus in restaurants have risen in the last few years. From flourless pizzas to broccoli rice, restaurants are coming up with unique substitutes to make your food choices healthy yet tasty. And the mushrooming organic cafes and calorie-conscious menus are transforming the restaurant scene in the city.

So next time you’re craving a pizza, don’t hold back, instead try one from Seeds of Life. A thin crust pizza made with a whole wheat base and mozzarella cheese, it will not only satisfy your craving but also save you a few calories for the day.  Launched recently by Mohit Bulchandami, Seeds Of Life follows three rules - no refined flour, no refined sugar and no fryer in the kitchen. While the menu looks basic with salads, sandwiches, pizzas, burgers, one close look with reveal that these are made of healthy alternatives. Talking about the reason behind coming up with this restaurant, Mohit says, “ The idea is to dial back to old times when organic was the norm, and shift back to fresh and locally grown produce. Like most people, I thought that healthy food was synonymous with non-vegetarian meals since they are protein-abundant. However, over the years, from my personal experiences, I have come to believe that the healthiest form of food is vegan. The concept of Seeds of Life has been developing ever since, to bust this and the many other myths that exist around healthy eating.” Starting at a humble price range of `200, the menu has healthy breakfast section, smoothie, and main course. Talking about some of the healthy substitutes used in the menu, Mohit says, “We have a lot of main courses where rice is being used, but instead of the regular rice, we also have the option of replacing it with quinoa which is high in protein and low in carbs, there’s also broccoli rice which is also extremely low on carbs. For wraps, we also have a beetroot tortilla which is made of beetroot and brown rice flour.”

Vegan cuisine at most restaurants has earned the bad name of being too pricey, but not anymore.  If you’re looking for affordable vegan food, head to Santé Spa Cuisine. Run by the franchise holder Kaneesha Jain, the restaurant focuses on sourcing local ingredients. “A lot of vegan restaurants buy their products from outside while we make everything in-house. Butter, cashew cheese along with almond, coconut and soy milk, all of it is made in-house helping us keep our prices at an affordable range without losing the integrity of the food quality,” says Kaneesha. The breakfast menu which starts from `250 serves dishes like Birchers Muesli, Upma made of quinoa and broccoli, sweet potato pancakes amongst others. According to Kaneesha, the pH level of food is important for a healthy lifestyle, she says, “We have a special Alkaline menu as we try to promote the importance of the ph level in our body as food ingredients below 7ph make your body acidic which isn't ideal.”

Another popular place for organic food that has become a hot favourite of Bollywood celebrities, Sequel came into existence when founder Vanika Choudhary wanted to make a farm-to-fork restaurant a reality in the city. “Most of this organic produce comes freshly harvested from the 'Sequel Green House,' which is just outside of Pune. We don’t overcook food. Most dishes retain the fresh flavours of the ingredients,” says Vanika. The menu serves an orange sweet potato waffle which is made with sweet potato, buckwheat and brown rice flour. “The batter doesn’t need any added sugar, thanks to the sweet potato and coconut yogurt. It’s topped with raspberries and granola and make a great option for breakfast,” adds Vanika who has added a new twist to pesto, with a recipe made of avocado, pumpkin seeds and cashews, instead of using pine nuts and parmesan.

Those residing near Vile Parle can try out Garde Manger Cafe, that serves lip-smacking dishes with a healthy twist. Pick up a ragi and almond meal pancake for `250 bucks. Then there's Silver Beach Cafe at Juhu, serving a healthy breakfast menu. With a modern take on breakfast, the cafe serves buttermilk waffle and in-house lemon curd, The Acai protein bowl, chilli scrambled eggs with sambal paste and more.