Drag performance, the theatre of the queer, is gaining the zest in mainstream entertainment. 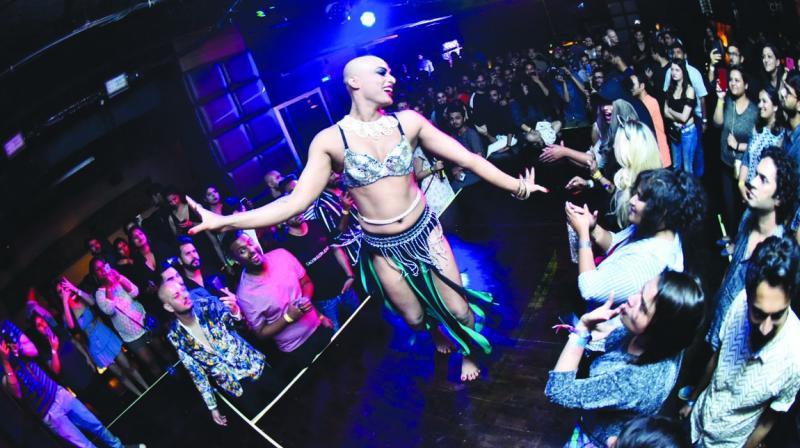 Drag has already made its mark in the pop cultural prominence world over. In India, it’s new and slowly getting accepted.

It’s all about a theatrical performance, where one puts on an attire to perform that is often seen as inappropriate. While an age-old practice, it got associated with homosexuality in the 1930s, when questions were often raised on sexual practices of people and culture. From makeup, to fashion, to performance this culture has it all. Drag queens are performing artists, mostly males or trans genders who dress up as women and act with an exaggerated feminine role.

In fact, world famous drag queen RuPaul, alias Andre Charles, once said,  “When you become the image of your own imagination, it’s the most powerful thing you could ever do.” Peppermint, a.k.a Agnes Moore, is a singer, actress, television personality and an activist. Due to her inclination towards art, she moved to New York to pursue music and theatre after completing high school.

She was the first trans woman to have disclosed her identity and finished as a runner-up in RuPaul’s Drag Race show. She has also appeared on America’s Next Top Model as the drag version of Tyra Banks, and Broadway musical Head Over Heels. As a trans woman, Agnes always felt having a female inside. “When I was in high school, I did my first drag appearance in a Halloween party,” she recalls during an exclusive chat with Asian Age.

Just like everything else, the meaning of drag evolved with time. By 21st century, it has become an expression of love, passion, politics and queer gender performance.

However, despite getting accepted in India, it’s often discussed in a hushed tone.

Although Supreme Court’s recent landmark judgment on decriminalising homosexuality has had a big impact on this too, with more people coming on to the fray, this still hasn’t changed the mindset of many.

There are innumerable pre-conceptions about the drag culture. For instance, many think only gay or transgender people participate in this kind of theatrical roles, or drag queens are “hijras” (eunuchs). Both are myths and pose a never-ending stigma on performers. The truth is even men can perform a drag show without indulging in homosexuality. Something we have often perceived in our traditional folk forms of theatre where men would enact the role of a woman.

So what do we cal them? He or she? 24-year-old Prateek Sachdeva, who is a trained ballet, jazz and contemporary dancer and popularly called Betta Naan Stop, says, “Call me he, call me she...call me whatever you want as long as you call me.”

“The concept of drag in India is relatively new if compared with the western world where drag has been established as a mainstream entertainment. In America, the media supports and promotes drag-culture where drag queens are competing with other genders all the time. Comparing that to Indian drag scene, it is fairly new,” Prateek explains.

Prateek argues people, in general, suppress the feminine-side and effeminate people around them.

“The challenge we often face is that people confuse drag queens with trans women. The difference is that a trans is what you are and drag is what you do. So a trans woman can also do drag, but not all drag queens are trans women. Unfortunately our society comes up with a pre-conceived notion that all trans women are either sex workers or hijras.” Prateek complains.

Sad but true, while drag is for everybody in most cases their purest incarnation is perceived at gay bars, primarily because of its queer form of act.

30-year-old Alex Mathew, who turned into Maya, a name that comes from the word Mayamma, “mother of illusion”, works as a public relations manager at a Bengaluru hotel.

He discovered drag as a performing art during a fancy dress competition when he was in class 12, and rediscovered its opportunities at the age of 25. “After my first drag performance, my mother asked me not to perform again. Without any support, it was really tough for me to explain to people that Maya is an alter ego and there is a line drawn between my dual personalities. In simple words, Alex is from Kochi and Maya is from a village near Kuttanad in Kerala,” he explains.

Peppermint who is often donning different hats for her different walks of life that are anything but ordinary, has an interesting take on the subject, as she analyses the whole culture.

“Drag is an age-old art form, where men dressing in women’s attire for entertainment purposes.

It is just entertainment using the language of a different gender.”

Peppermint adds, saying drag entertainers have to be a jack or jacqueline of all trades.

“These days you have to be a marketing genius on social media, a good communicator through your speech or performance.

With this talent you can attract different types of people with different mindset and likes,” she explains.