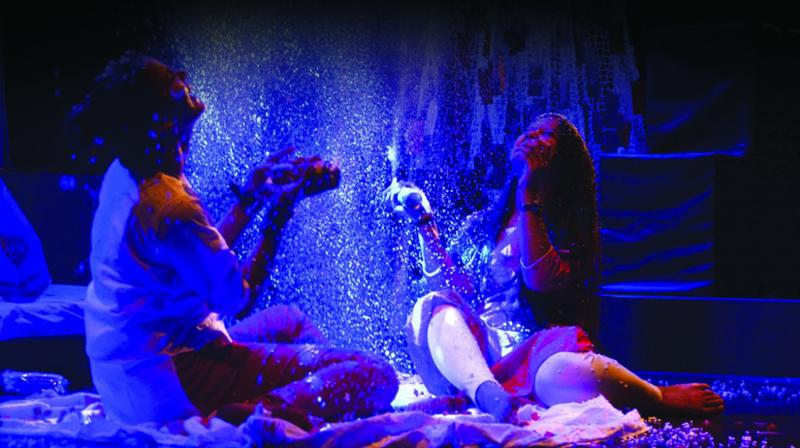 Meeta Ki Kahani or Meetachi Gosh, originally written in Marathi by Vijay Tendulkar which was recently staged by Shriram Centre for Performing Performing Arts Repertory under the brilliant design and direction of Sameep Singh, the repertory chief and an NSD alumnus.

The play, set in a college campus, traverses along the complexities of relationships, based on perceptions and understanding of moral values, stretched out to women in particular, which when misunderstood can reach to a non-desirous end.

Meeta (Alqama Khatoon) befriends Bapu (Ashutosh Singh Rathore) in college that creates a flutter among his friends. But soon she confides in him about her emotions and confusion in life, not fitting into the norms and conventions of the society. She, unlike other girls, is friends with guys but is not attracted to them.

Bapu as a character can be related to more of traits, which are otherwise confined to women by the society, whereas Meeta stands alone as bold character. After every act, Bapu is seen introspecting, interpreting and analyzing through a flashback video – a narrative that is very different and beautifully connects the storyline.

Contrary to Vijay Tendulkar’s realism, the play has been designated a non-realistic design, imposing the openness of the story.

Breaking the image of a conventional woman of Indian society Tendulkar had written about a young girl ‘Meeta’ who is battling with herself trying to fit in the norms of society. Confused about her emotions she finally finds all her answers in another girl Nama (Jyoti Rana) who made her like never before. And there’s Bapu’s room-mate and dear friend Pandey (Maneesh Sharma) who is head over heels for Meeta and Bapu is unable to explain the complexity to him.

But there’s Dalvi (Kirti), Nama’s boyfriend who is the villain for obvious reasons and compel situations to bring Meeta’s downfall by defaming her at every step, inciting mass criticism.

Expressing her queer feelings to Bapu was easy, despite his initial attraction towards her, but expressing the same to the society is the biggest challenge for Meeta, where every move is questioned. Bapu wheels forward the journey, touching the sensitive events narrating the ups and downs of Meeta’s life and the escape she needed from the stereotype. Every character has played the part with an impeccable style. While every character performed brilliantly, Maneesh Sharma, who played the role of Pandey, simply stole the show with his effortless acting and just blending with the character.

Vijay Tendulkar who had written this play in 1981, ahead of his time, perhaps finds more relevance of it in today’s society.

Regardless of recognition to Article 377, has the society really been able to accept it?  Does a woman still perpetuate the oppression of patriarchy if she imbibes the nature of a man? For people like Meeta, is ending their life due to inadequacy, a real solution? The play forces us to question these issues through Bapu’s narration of incidents.