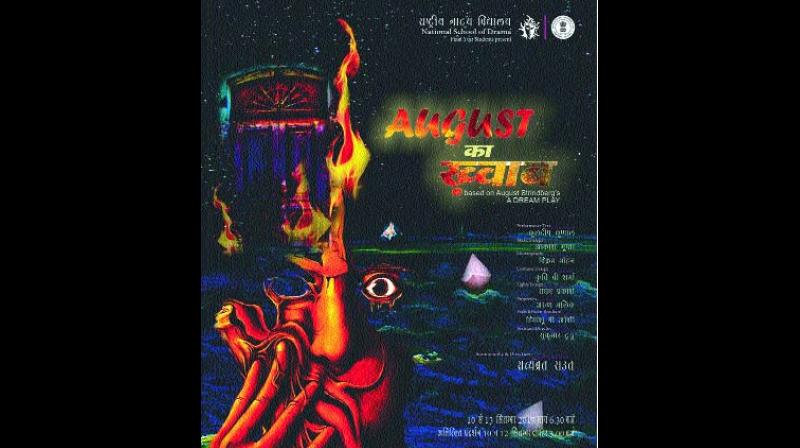 Debashree Chakraborthy as the mother, Ranevskaya was the star of the show.

Two plays by the National School of Drama were staged recently. The first year students presented August Ka Khwab based on August Strindberg’s A Dream Play. The play is difficult to enact with all its mythological characters that have universal names and characters like Opera dancers, party dancers, hawayeins and monsters. It is difficult to imagine these characters on stage. Yet, director Satyabrata Raut did a good job as he tries to realise the play in Hindi with performance text by Kuldeep Kunal.

Kunal, who has been writing for the stage and screen alike for quite sometime, has also done some original writing including, Che, the Land Weaver, Akk Amoli, Plastic Money and Bharat Milaap. He has also adapted classics like George Orwell’s Animal Farm and Shakespeare’s Midsummer Night’s Dream and Merchant of Venice.

His internationally acclaimed play, Eklavya Uwach has been translated and performed in Kannada and Bangla.

August Ka Khwab follows the journey of the central character, Agnes, the daughter of Hindu God Indra. She comes to earth from heaven in the form of a beautiful woman to find out the complexity of humanity and their discontentment. She experiences the pain of being a human being.

In the beginning she is hopeful that love will conquer everything.

But after she listens to the anguished cries of humanity, and experiences the pains of family life, she discovers that refromation will always be stifled by the self-righteous people.

The character of Ignis was played by the very beautiful Indira Kumari, who was both subtle and flexible in her role. The way she climbed up the net was remarkable and so was Mahadev Singh Lakhawat who acted as August, an actor, police, lover and scholar.

The choreography by Vikram Mohan was quite good and Akash Gupta’s music composition was imaginative.

The play begins with a monologue in which Strindberg wrote these lines: “Life disgusts me and has always done so, everything is worthless! People are not born wicked but life makes them wicked, so life cannot be an education nor can it be a punishment (which improves). It is simply an evil. Resignation! Yes this what I tried last, but if you put up with everything you have in the end to endure filth and humiliation, and that is what you have no right to do.” Strindberg meditated suicide but he lived to write The Dream Play, inspired by Hindu philosophy and mythology.

This play was staged in September 1996 at the open air theatre in Dilli Haat in puppet form, by Marionetteatern Company. The narrator and the protagonist was Mefisto, who in his initial speech from the top of a rotating step ladder, here he was climbing a net, “condemns humanity as a betrayer of ideals created by itself, as butcher and killer, knave and traitor”.

The daughter of Indra, torn between vitrolic reasoning and the gentle voices of angles that bring with them the messege of hope and love.

Later in the play, Mefisto as the sutradhar, orders Mahatma Gandhi to come as the next witness to life as he described it.

As the iron rod puppet of Gandhi descends on stage, talking about peace, harmony and love and of non-violence and truth, screams Mefisto, the sutradhar: “what did the world do to him? And when the gun shot booms and the once praying hands trun on each other, the enactment comes full circle. Human beings are not good and nor are they evil. They have feet for walking but no wings.”

This puppet play was directed by Michael Meschke in 1996.

The second play, Waqt Guzar Jaata Hai, was staged by the final year students of the NSD. It is based on Cherry Orchard by Anton Chekhov. It was designed and directed by Suman Mukhopadhyay in the open lawn of the NSD campus. Suman has been doing TV series, short films and cineplays. “Men make their own history”, says the director in his note on the play. “But they do not make it under self-selected circumstances but circumstances existing already, given and transmitted from the past, the tradition of all dead generations weighs like a nightmare on the brains of the living. This is what Marx says in his eassy The Eighteenth Brumaire of Luis Bonaparte”. “In my opinion”, says the director, “it is so true and prophetic. The idea to perform Cherry Orchard for final year students of the NSD, is from a long-preserved dream to work with a Checkov play.

Chekhov’s another play, Uncle Vanya, was also enacted in the same area during the Bharangam 2016. But the production lacked the dramatic intensity of either the Russian or Robin Das’ version of the Cherry Orchard done a couple of years ago.

Debashree Chakraborthy as the mother, Ranevskaya was the star of the show. There was Ankur Saxena Bashar who played the rich man, Lopakhin.

Then there was Debarati Sikdar who played the elder daughter, who was a sad face in the house where she has spent all her life. She is in love with Lopakhin who has all the money and comforts that she so desires.

Servant Yasha played by Sarfaraz Ali Mirza. All these people tried to make this play a success but unfortunately they were crossed by the quality of the Russian play.