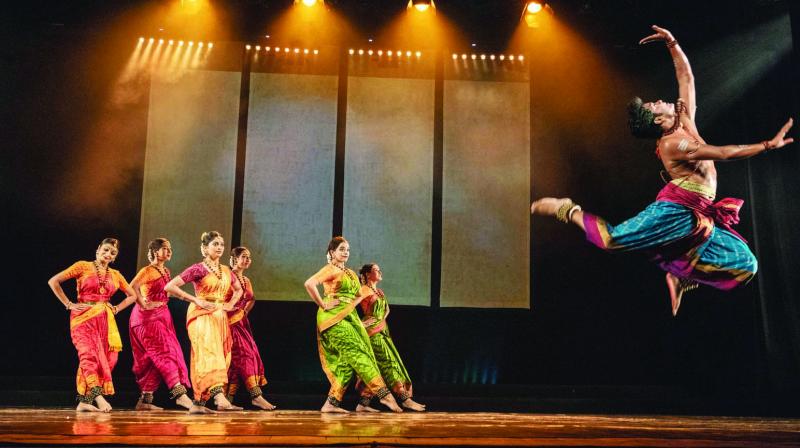 Surviving for forty years in the dance field, with fortunes depending as much on the dancer’s proficiency as on much else beyond it affecting the scenario, is in it-self no mean achievement, and to have done so with credit is a matter of pride and satisfaction. Dancers celebrating forty years as a landmark event is understandable.  A product of Chennai’s Kalakshetra, Dr.Ananda Shankar Jayant, a bureaucrat/dancer combines a full time profession as a high ranking Indian railways official, with running an active Bharatanatyam school – Shankarananda Kalakshetra, initiated in 1979 at Hyderabad. Other activities apart, the institution has been a pioneer of arts in the digital space by creating ‘Natyarambha’ a first of its kind Bharatanatyam Practice app now being followed by students and gurus from various parts of the world. With twenty five dance productions staged across continents to its credit, Shankaranand’s yearlong fortieth year celebration was inaugurated with  “Tales of the Bull and the Tiger” premiered at Hyderabad’s Ravindra Bharathi.

While the theme is as old as the dance, it is told in a different way. Ananda’s unique approach apart from demystifying  the Shiva/Parvati myth, has a perspective on the divine couple coming from their ‘vahanas’ Nandi the Bull and Simha the Lion – with Shiva here seen as a householder. The tales of the bull and the tiger, communicating to both child and adult in simple directness, also include the esoteric philosophy of Shiva as the non-anthropomorphic, formless Lingam, and of Parvati as the female energy residing in the Sri Chakra. The marathon scripting effort for Ananda Shankar’s concept,  dips into myriad literary sources starting from Tirupugazh, Shankaracharya, Tevaram, Patanjali to excerpts of music of Harikesanallur Muttiah Bhagavatar, Muthu Tandavar, Papanasam Sivan, Andavan Pichai, Swami Dayanand Saraswati to hymns of Shiva eh al..

“Vagarthaviva Sampriktau” Kalidasa’s Kumarasambhavam verse, which introduces the entire story, likens the Shiva / Parvati inseparability to word and its meaning. This serene recitation,  is followed by the clatter of falling vessels with an exasperated female voice  ‘Mushika’(mouse) and to the playful strains of raga Arabhi enters the delightfully hopping vahana of Shiva’s son Ganesh, waving hands at the back signifying mushika’s tail.  Ganesha Gayatri and an elephant collage herald the arrival of Ganesh himself ‘Vikatot sundara danti mukham’ moving with brisk energy to Ganesha Talanam . Soon, the peacock vahana of the family’s other scion Skanda enters to the inevitable Shanmukhapriya strains, as six dancers turned out in peacock shades enter from two sides of the stage merging into a delightful Mayur Misra Alaripu performed to the Tirupugazh “Mutait Thiru”, with Skanda himself showing his presence with the lyric “Sharavana bhava”. Bull Nandi majestically strolls in to Gambhira Nattai strains, while just raga Nattai sees the tiger enter in very different strides from the opposite end.    Ganesh and Skanda introduce the audience to“Shiva Vahana Uttama- Nandikesha Mahabhaga” and “Maha Bhavani Vahini” with all dancing together – and the vahanas are requested to tell a tale.

The grandeur of Mount Kailasam like a measuring rod marking the northern border of India, as described in the Kumara Sambhavam verse “ Astutuyarasyam dishi devadatma  himalayo nagadhirajaha….” heralds a location shift. Kalyani raga plays as wedding preparations are afoot for the Shiva/Parvati marriage, with eight dancers decorating while creating unique dance formations, covering the stage. A piquant exchange between the bride’s group and that of the bridegroom (the musical interaction in ragas Bilahari and Valaji), concludes with the wedding procession entering to the traditional Nadaswaram, the vahanas leading the groom and bride, ( dancers Mithun Shyam and Aananda Shankar)- Shiva’s group moving to Nandichol syllables ‘Tat dhit tom Nom’, and Parvati’s to ‘tari tari tarita’. The couple’s sringar scene, embodying  saguna rupam and the ardhaniriswara two halves in one identity, is built round popular verses of Shankaracharya - “Vishala Nilotphala Lochana’ and ‘Champeya Gowranga sharira’, concluding with homage to Shiva as ‘Jagadeka pitre’ ( father of the Universe), and Parvati as ‘Jagatjanani’ the Mother, the ragamalika music set to Saranga, Athana, Hindolam and Hamsanadham.

Harikeshanallur Muttiah Bhagavatar’s Kriti “Ganesha Skanda Janani” in Nasikabhushani ragam is interpreted as a very domestic scene of Parvati mothering her two sons, with the entire family and vahanas later dancing merrily together. Known to take their mother for granted, the youngsters are enlightened by the vahana quoting the Dhyana Slokam from Lalitasahasranamam “Sindhooraruna vigrahaam, trinayanaam…..” that their Mother, a manifestation of Sakti, is no ordinary Being. Exploring the abstraction of formlessness is the challenging part of the production, drawing on excellent digital designing and lighting expertise.  Shankaracharya’s Soundarya Lahari recitations accompany designs appearing on the back screen with tantric geometry diagrams representing the energy centers or chakras with the elements earth, water, fire, air, akash, with dancers frozen in simple formations in front. The segment climaxing to the finale set to raga Revati, depicts Kundalini Sakti  through a teermanam woven out of the Devi’s Bija Mantra syllables – “Om Aim, Hreem, Shreem”.

A rhythmic sequence woven to syllables ‘Aham/Param’ introduce Shiva’s Nirguna form. The Akasha Lingam segment (as described to Vilaver Kanipad in a Tevaram hymn) plays out the battle for supremacy between Creator Brahma and Cosmic architect Vishnu  (enacted by guest artists Vijay Shekhar and Surendranath)which is interrupted and thwarted by the entire space getting covered in tongues of flame spewing out of the Akasha Lingam. To douse the flames, by discovering the ‘aadi’ and ‘anta’ (start and end) of the Lingam, Visnu as Boar descends to the bowels of the earth, while Brahma as swan soars into the skies-  though both are forced to give up without success, forcing the realization of the omni- present Akash Lingam as supreme power. The scene ends with Brahma Murari from Lingashtakam. The concluding segment of the production sees Mithun’s talents in full play as Shiva  Nataraja, the King of Dancers, eulogised in Nataraja Dasakam ‘ Kanakasabhapata kanchana vigraha’ and Patanjali’s stotram “Sadachita Udanchita”.
Awed viewers take in the spectacle of Shiva’s dance, in Muthu Tandavar’s Kriti ‘Aadikondar.’

The very popular lyric “Idadu Padam tooki” in Kamas is expressed as  Parvati’s wonder at the magnificence of her Lord dancing, left leg raised. Homage to Nataraja’s glory continues through the charanam line refrain “Nataraja deva Saccidananda” from the Natakuranji varnam of Papanasam Sivan. This is followed by  Dayanand Saraswati’s “Bho Shambho” in Revati. The entire universe dancing with Nataraj is depicted through Ravana’s Shiva Tandava stotram “Jatadharam Galajal”. The entire dance narrative makes full use of compositions which are very much part of the traditional repertoire of Bharatanatyam, by putting these into a context suitable to the story as told by the vahanas.

The tale ends with nightfall when the entire family is at home. One has the endearing image of Parvati singing “Seshva Sukham” and “talelo” lulling her children to sleep.

Finished performances and stage effects, with each of 23 dancers meticulously trained and unique group formations were features of the production. The team effort spoke of years of integrated work practice, with music composition by Sathirajuvenumadhav and Jati and Nattuvangam by Renuka Prasad also deserving of high praise.