An amateurish play, with shabby costumes

Ramkali sells the shop and so she can get rid of the relatives that have landed there. 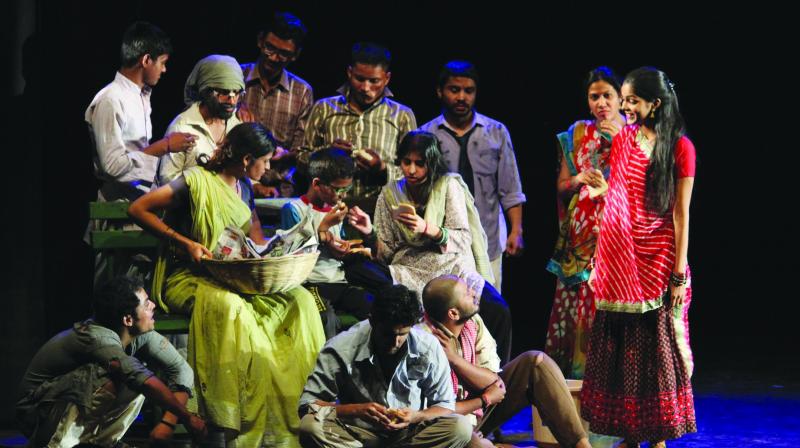 Ramkali, a play by Asmit, was staged at The India Habitat Centre. An adaptation by Amitabh Srivastav of Bertold Brecht’s play, The Good Person of Szechwan. The play was directed by Arvind Gaur for Asmita. In Brecht’s play, the hero is a young man who aspired to become a pilot for which he needs money for training etc. In this version in Hindi, the hero is a young man who is an unsuccessful actor in Mumbai, comes back to Delhi and is unable to find a job and tries to commit suicide in a park where Ramkali meets him and dissuades him from killing himself. She asked him about his problems. He explains how badly off the young actors are in Mumbai and how they live from hand to mouth but he says that his dream is to become like Shahrukh Khan and he says that “if I cannot then I may as well die”.

The play opens with a chorus and goes on to three gods who have come to earth to find a good person as the reports are saying that things are so bad on earth that it is difficult to find even a single good man. They see a water seller and ask him to find accomadation for them but not in a hotel but in someone’s house instead. After being denied in a few respected homes, the water carrier goes to Ramkali’s house and asks her if she will put up the three gods in her house. She agrees, though she is waiting for a client to come to her. The client comes drunk and goes away. Three gods are very grateful to Ramkali and give her Rs 2 lakhs.

Now Ramkali has money and can do without selling herself. She buys a tobaco and Pan shop. Soon she finds herself invaded by a variety of people claiming to be relatives and good friends of her parents. They all want to live there in the one room attached to the shop. They will not budge from there and expect to be fed by her also.

Ramkali sells the shop and so she can get rid of the relatives that have landed there. She cannot make herself do it. She dresses up as her old brother and come to the shop and says that she is selling it. She takes money from the prospective buyer and hopes to save herself from the ignomy of living with these people. Her brother Ramlal makes an appearance and signs the deal. Getting her money back, she wants to give it to the young actor who needs it.

The young man promises to take her with him to Mumbai and they go into an imaginative flight as if they have arrived there and are at the seaside. Love is flowering between the two and nothing will it stop it, it seems.

But the brother puts a full stop to this game of love by saying that he is going to make beedis behind the building starting from the small space the landlord has gifted to Ramkali as a favour for being so beautiful. Though mad at himself, he is in love with Ramkali and has therefore given her the space to live. She has sent all her relatives there. The brother throws them all out and starts the factory. Soon, he is making money.

Finally, the three gods dressed as judges try the brother for havig got rid of his sister. This is done at the behest of her lover, and the people who depended n her. When he finally cannot say anything to disprove their statements he says that he wants be alone with the three judges. So the court was cleared, he is alone with them and he breaks down and  confesses that he is actually Ramkali. He removes his cap and shows them his two plaits and after this it was incomprehencable what he said. It was all lost in her crying. Bad show that!

The actor to play Ramkali was Saveree Gaur and Ramlal was played by her sister Kakoli Gaur, both daughters of the director and the music director, Dr. Sangeeta Gaur.

The play was quite amateurist in it’s denoument. The songs penned by Piyush Mishra, though heartly sung, lost their meaning in the cacophony of the music. The costumes were shabby especially those given to the main characters.