The singing, the Nattuvanar’s Jati recitation with the dancer’s rendition through movement, all in simultaneity, have to find perfect synchronisation. 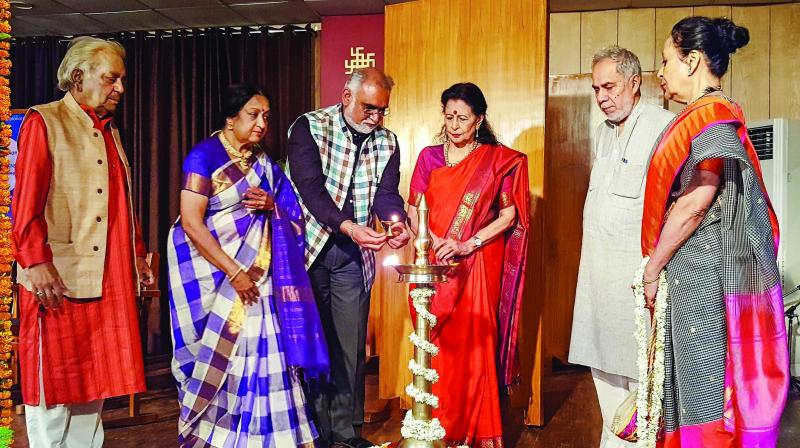 It was heartening that the Indira Gandhi National Centre for the Arts (IGNCA) under its Sanskrti Samwaad Shrinkhla series hosted a two-day homage to Balasaraswati (1918-1984) — the phenomenon — marking the legend’s 101st birth centenary year. Ideally, the SNA should have taken up this responsibility. Conceived and spurred by the drive and initiative of board members Dr Sonal Mansingh — now member of Parliament and Dr Padma Subramaniam, the scholar, the Padamanjari event was curated by Balasaraswati’s ardent disciple, Nandini Ramani, art critic and daughter of the late scholar and the staunchest of Bala’s supporters, Dr V. Raghavan.

Looking back, dance stalwart Dr Sonal Mansingh, in the panel discussion moderated by member secretary, IGNCA, Satchidananda Joshi, placed “Bala” as she was known worldwide, as one of the three greatest dancers the world had ever seen — the other two being ballerinas Margot Fonteyn and Galina Ulanova. A tall and big woman unlike the Natya Sastra prescriptions for the ideal dancer, Bala, while performing, became the very embodiment of dance. Padma Subramaniam, reminiscing on the viruttam “Varadirundaal” in Pillaitamizh (she said was on Meenakshi but some sources mention it was on Kantimati) in Surutti sung by Bala in a Music Academy performance, stated that recollection of that piercingly evocative melody even now created a sense of horripilation. Pandit Birju Maharaj, who had the great fortune as a youngster of staying with Bala’s family for 22 days, referring to her abhinaya prowess, remembered her depiction of “Krishna nee Begane Baro” — when the mind’s eye of the viewer saw Krishna in the void.

The screened Satyajit Ray film on Bala, with the dancer on the sea shore trying to hold down her ballooning saree while she did abhinaya is a disappointment. But a full marathon varnam in Bhairavi “Mohamana en meedu” without stoppage, rendered at one stretch and at a fair clip by a dancer who at that that time was well over 50 and just recovering from an operation, left one speechless. Having lost weight, looking unlike her usual self with a hairdo in a bun, she was definitely not in the best of health. But nothing could take away from the fact of the sheer stamina and innate skill to pull off such a performance. While critics have raved about Bala’s abhinaya, few have understood the subtle and clever arithmetic of her nritta with the teermanams, which in execution, demand not just movement agility but an immaculate measurement of fractional intervals of time. All the more reason for appreciating Nandini Ramani’s lecture with a demonstration, which, edited due to lack of time, put the emphasis on laya and nri
tta. The mridangam support, initially, in a misra jati teermanam in Roopaka talam, miscalculating the take-off point (repeated with Nandini’s correction), with daughter Sushama demonstrating, proved how even for artistes knowing the sequences, starting at the exact point of the avartanam and finishing with exactitude on the “sama” of the musical line, was a matter of touch and go — for the non-stop singing in this Bharatanatyam school while teermanams are executed is unlike the method today. The singing, the Nattuvanar’s Jati recitation with the dancer’s rendition through movement, all in simultaneity, have to find perfect synchronisation.

The Sankeerna teermanam Nandini demonstrated was also very tricky. Fittingly termed “teermanam” (meaning strong assertion in Tamil), Nandini remarked that these nritta creations could not be trifled with. The Guru/shishya approach permitted no questioning on the how of stringing together these rhythmic syllables — the disciple tersely told to follow the Guru’s instructions. Years later, experience and evolving understanding, one hoped, would reveal answers to unsolved riddles.

The hallmark of Balasaraswati’s Tanjore school Bharatanatyam lies in the excellence of music as the starting point — an aspect reigning as the birthright of a 400-year lineage starting with Pappammal, an 18th century Tanjavur court musician and Bala’s grandmother Vina Dhannammal, a musician par excellence and her own Mother Jayammal, whose singing was one of the highlights of Bala’s Bharatanatyam from 1958-1972. It was said that if in Jayammal’s singing, one saw dance images, in Bala’s dance, one heard the music. Bala herself, a master musician, remains the only example of an extraordinary dance talent being conferred the Madras Music Academy’s highest music title of “Sangita Kalanidhi” (1973). Nandini Ramani, whose training at the T. Balasaraswati Bharatanatyam School functioning in the Music Academy premises, was under Bala’s Guru Kandappa Pillai’s (1899-1941) son Nattuvanar Ganesh (1924-1987) with Bala overseeing and stepping in to teach during the last stage when the disciple was considered fit to be taught interpretative dance through hand gestures (kai ppitithal). Bala’s own abhinaya training was under Mylapur Gowriamma and Chinnaiyya Naidu and later Kuchipudi Vedantam Lakshminarayana Sastry. And the manner hand gestures, emotions or bhava and music were strung together evoked a sense of inevitability, as if it could be no other way, though abhinaya, based on manodharma and spontaneity, was never set and structured.

Nandini mentioned Bala’s unpredictable temperament, amiable and warm one day and carpingly taunting in another. Without raising her voice, the eyes flashed flames of anger and disapproval. “So you know everything about these two-hand gestures,” she would jeer. (One wonders how she reacted to the major part of her teaching career in Wesleyen University with American disciples from a different culture!) As daughters of the Music Academy functionary V. Raghavan so close to Bala, Nandini and her older sister Priyamvada (Bala’s first student) received no preferential treatment. Despite days spent doing the same item, none dared suggesting being taught something different.

Throwing light on “Bala, the consummate musician”, reputed Carnatic vocalist Charumati Ramachandran described Bala’s art as a combination of high quality music and dance entwined with searing bhakti and sringar. The family, she said, in 1867 left Tanjavur to settle in Chennai. The glorious chapter of how this lineage treated the Padam in music (and in dance) began with Bala’s grandmother Dhanammal who gave to veena playing (trained under giants like Kalyana Krishna Bhagavatar) — her own identity. The Friday music soirees in her house with her veena playing had Chennai’s musical luminaries arriving a night before, so as not to miss the concert. Unlike the dyed-wool traditionalists adhering to the Muttuswami Dikshitar conventions and chauka kalam singing of Bala’s reputed cousins, Brinda/Mukta, Dhanammal and family had an approach more open-minded and assimilative. A mutual give and take was in the family’s friendship with Hindustani wizards like Abdul Karim Khan and Vishwa’s (Bala’s brother) admiration for Gouhar Jan’s singing. While Karim Khan’s Hamsadhwani love resulted in a Hindustani composition in the “Vatapi Ganapatim” mettu, his musical influence resulted in crisp Hindustani-style brigas emerging in some of Dhannammal’s almost fretless, fluid continuity in Padams like “Marubaniki tala lenu raa”. The Kamas “Janaro ee mohamu sahimpalane” showed the Maach Kamas influence of Hindustani music. A phrase like “Manini Jalamela” sounded exactly like Shambhu Maharaj’s singing with abhinaya of “Kaun gali gayo Shaam” in Khamaach. The style of rendering the words in the Sindhu Bhairavi Javali “Mosajesene” was very Hindustani-like. Begade metamorphosed into a Hindustani/Carnatic fusion. Knowledge combined with demonstrating finesse gave Charumati’s talk an immediacy.

The Padamanjari began with some idea of the Bala technique of abhinaya with Nandini presenting “Ella arumaigalum ella perumaigalum” in Todi ragam, wherein the Uttama Nayika, intrigued by the husband’s indifference, wonders if somebody has poisoned his mind. The Javali “Samayamide Ra Ra Swami” was in the contrasting mood of the impetuous nayika full of desire calling out to her loved one, for this is the time for love. The dancer’s constant backwards and forwards movement was in the typical Bala mode. Chitrambari Krishnakumar’s vocal support (a disciple of Charumati) with clear sahitya enunciation and classical melody without frills, had K.R. Venkatasubramaniam’s nattuvangam and R. Raghurama’s simple unornamented mridangam support. Nandini’s daughter, Sushama, an evolved dancer since one last saw her, had the same constant movement, walking forwards and backwards, including a stylised, post-Bala stage entry. Bala just walked on to the centre of the stage and performed. Sushama’s rendition of Ghanam Krishnaiyer’s Pantuvarali Padam “Adarkul yen inda padattam,” portraying the nayika chiding Lord Muruga’s impatience, for she could oblige him only after “this old lady retires for the night”, had conviction, her netrabhinaya eloquent. The next Swati Tirunal Padam in Kurinji “Aliveni endu seyyan” describing the heroine pining for Lord Padmanabha, while convincing, lacked the same impact.

Proficient dancers performing after Sushama were more in the post-Bala style. Roja Kannan’s “Choodare” in Shahana, showing gossipy village women aghast at the openly nonchalant nayika, who despite being married into a good family, is proudly off for a tryst with her beloved Krishna, was a highlight — earning high marks for costume aesthetics — with abhinaya excellence. Proceeding with the Senjurutti “Sakhi prana” was overstretching the time allowed. Similarly, Lavanya Anant — “Jagadodharana” in Kapi — showing the great fortune of Yashoda in mothering the Creator of the Universe Himself, in a constant contrast of Krishna as the macro and the micro presence, was done with great finesse. After this, Dharmapuri Subbarayar’s Javali in Kamas became an overkill, cutting into time for the last dancer, Divyasena Haribabu, who waiting in her costume finery, had to present her item “Idaivida vendumo Sakshi?” the next morning. In a very obvious visualisation, it portrayed the khandita nayika pointing tauntingly to all the telltale signs of infidelity writ large on the nayaka’s person, asking if any more proof was needed of wrongdoing.

Speaking of Bala’s Guru Nattuvanar Kandappa Pillai, whose knowledge and creative imagination Balasaraswati thought was unsurpassed, imparting to her style an identity like none other, Bala’s own tutelage under him from the time she was little more than a child, was not easy. Quick to anger — any mistake in carrying out the Guru’s instructions — resulted in the “tattukazhi” (thin stick with which the teacher keeps time striking a block of wood) flying through the air and landing on the ankles which smarted with pain. Throughout her career, not a word of praise came from the Guru. For two years youngsters learnt only footwork and how limbs were to be placed. Only after laya was perfected, were hand movements taught with “adavus” (movement units which form the alphabet of Bharatanatyam). And after this came the Virutham, Alarippu, Jatiswara, Sabdam, Varnam, Padam, Javali and Tillana. The hasta pada viniyoga of the Kandappa school, its vigour and teermanams which Bala scrupulously followed till the end, along with the concert format was regarded as a step-by-step evolving likened to entering the Gopuram gate of the temple till one reached the Sannadhi where the Deity was. It was a spiritual process. And even while Bala was not initiated formally as a temple dancer, her bhakti and sringar were dedicated to the temple and the Gods and her arangeetram was in the Kancheepuram Kamakshi Amman Temple.