In order to explore time in all its facets and pivotalness, an exhibition titled Painted Almanac is currently on display at the Threshold Art Gallery. 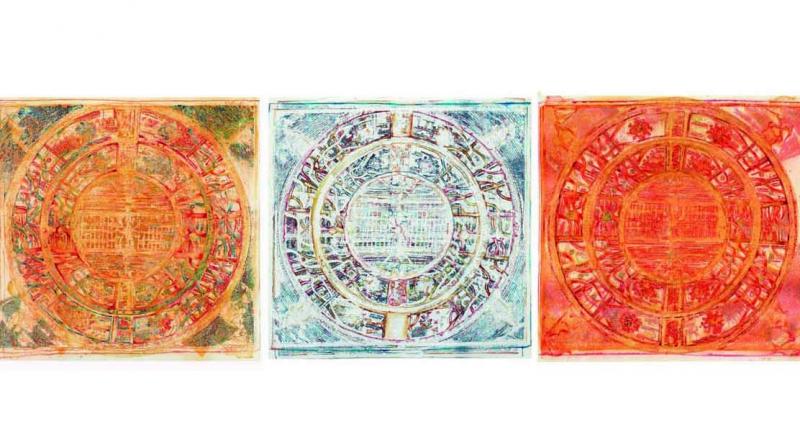 Mapping time (the cycle of years) by V Ramesh

There is a saying in the English Language that reads something like this, “Time is of the essence”. But as human beings, has one ever thought about that why it is of the essence? Is it because  one only considers time as essential because of something pivotal?

In order to explore time in all its facets and pivotalness, an exhibition titled Painted Almanac is currently on display at the Threshold Art Gallery. It exhibits the work of nine artists who have represented their interpretations of the calendar, using it as an inspiration from the past to create works based on the current times.

The artists on display are; Anindita Bhattacharya, Desmond Lazaro, Gulam Mohammed Sheikh, Manisha Gera Baswani, Manjunath Kamath, Roshan Chhabria, Ruby Jhunjhunwala, Tarshito Strippoli and V Ramesh. The curator Tunty Chauhan says, “The show comes from my experience of living life when I crossed 50. I thought, what was I doing with my time? Due to this, I became more conscious about what I want to do with my time.”

One of the notable works she talks about is, Thick as Guilt by Anindita Bhattacharya that uses coffee, gouache and natural pigments on hand-cut paper. “Even though the works are beautiful and almost look like butterfly wings,” Tunty explains. “There is a very hard-hitting reality of what is happening to certain species by the act of humans.”

While the theme is time and it revolves around the calendar, she points out the artistic side by saying, “The zodiac is an artistic representation of time; the book of hours are representations of time. The essence of the show was the artists journey of exploring time and giving meaning to it."

“I don’t think the time is essential — being thoughtless is essential. Time only comes in the second when a thought comes in,” she elaborates.

One of the artists, V Ramesh displays his works which are titled Mapping time. This series depicts the cyclical representation of time through three paintings, depicting 20 years each implying the past, present and the future. He says that creating artwork on time is difficult because time is abstract. “It took me three months to paint those circles — there was a physical question of time,” he says on his work.  He points out, that in the Indian sense, time is divided into a cycle 60 years where each year has a name. And, the name of this year is Vikari which is the 33rd year in the cycle of sixty years.

“It is a simple straightforward representation of time in terms of  20 years (three parts of 60 years). So there was no question of a personal element coming,” he affirms. But he did tinker with it slightly. He expresses, “The colours were totally different in the original. I just changed the colours." On the subject of what time means for an artist, he concludes, “Time makes you realise that there is nothing steadfast or fixed in this world. Time also teaches you that nothing lasts forever.”