Spirit of Ink also has on display the artist’s later works, including five new paintings made especially for this exhibition. 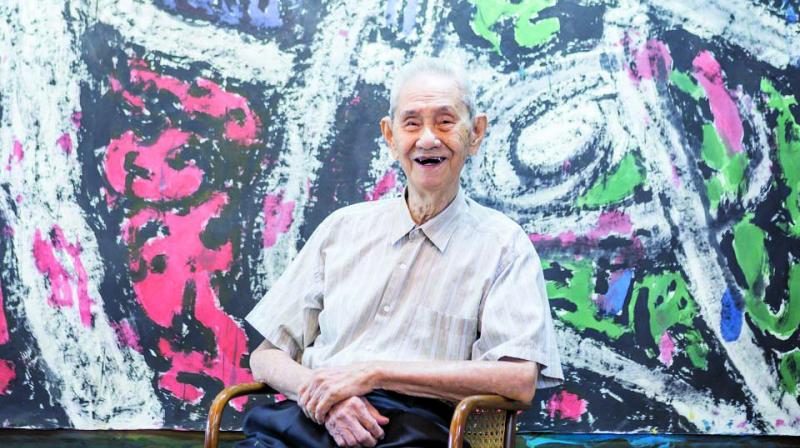 Singapore’s oldest and most respected Chinese calligraphy artist, Lim Tze Peng’s works will be on display in India for the first time through an exhibition being held in the city.

On a huge sheet of rice paper, intricate calligraphy brush strokes outline a bustling scene in Singapore’s Chinatown of the 1980s. People sit crammed into hole-in-the-wall coffee shops, chitchatting or sipping on coffee, as ramshackle buildings look on. The image is more observation, less comment, and yet, it’s significant because it captures a reality that has been lost in the mists of time.

This Chinese ink on paperwork, titled Coffeeshops at Chinatown, is a creation of Lim Tze Peng — Singapore’s most respected Chinese calligraphy artist, and at 99 years old, their oldest living one. The artist’s works are being brought to India for the very first time through the exhibition The Spirit of Ink, held at Mumbai’s Dr. Bhau Daji Lad Museum, as part of modern Singapore’s bicentennial celebrations. Apart from familiarizing us with the works of Lim, the exhibition also aims to foster a closer cultural relationship with India, it’s South Asian counterpart with whom it shares a lot in common. 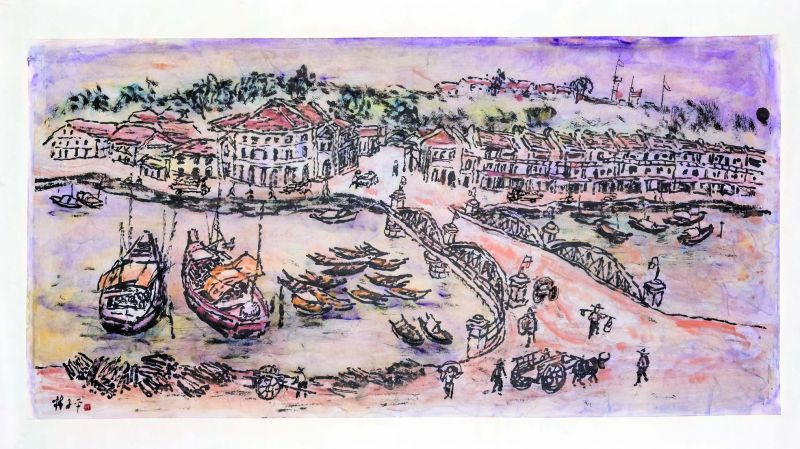 And a lot of this commonality can be seen in the 20 Lim paintings on display, especially in his earlier works, which capture locations like Chinatown and the Singapore River in the 1970s and ’80s, right before the city-state would undergo a structural makeover in the pursuit of modernisation. Jazz Chong, whose gallery,  Ode to Art, collaborated with BDL for this exhibition, and who has worked closely with Lim, shares that the artist felt compelled to capture Singapore’s rustic milieu before it was lost forever. These works of his are largely observational and capture Singapore’s markets, coffee shops, and rivers, along with its crumbling and chaotic infrastructure in monochrome calligraphic strokes. The artworks remind us of streets in yesteryear Bombay, with its Victorian-style buildings and hotchpotch markets and shops.

Spirit of Ink also has on display the artist’s later works, including five new paintings made especially for this exhibition. Lim’s later works become increasingly more abstract and philosophical, and one sees the artist fuse idioms and verses from his favourite poems into his art. It’s during these years that he also experimented and invented a new form of calligraphy called “hu tu zi”, which sees the calligraphic strokes become more curvy and artistic as opposed to being sharp, unwavering lines. In these works, the artist infuses his paintings with colours that resonate with the text included, and so, a painting titled Eternity is suffused in white, while a more poignant verse is immersed in sombre hues. This combination of text and colour creates an emotional effect on the viewer such that even if you can’t understand the script, you can still sense the character of the artwork. 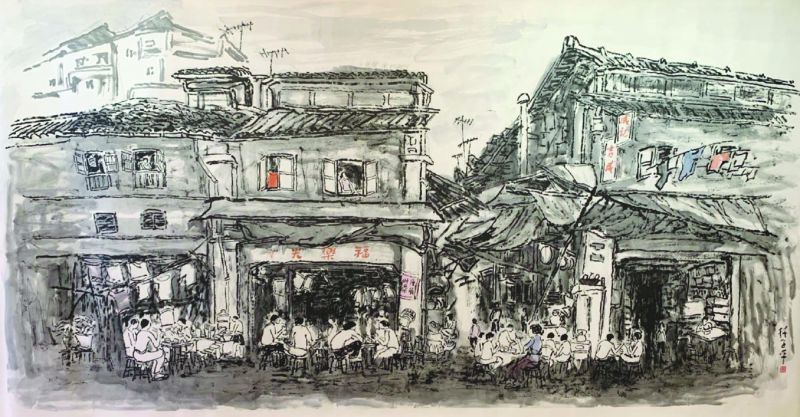 “Even though he is 99 years old, he continues to paint every day. His studio is located on the second floor of his house, but he climbs up to the studio, takes his huge calligraphy brush in hand and paints standing. He’s always thinking about painting because he believes it’s the best way to preserve realities. He always says, ‘Life is transient, but art is eternal’,” shares Jazz about the artist’s credo.
— Ongoing till September 15, from 10 am to 6 pm at Dr. Bhau Daji Lad Museum