Mr Modi inaugurated six projects worth Rs 3,420 crores and laid the foundation stones of 17 others worth Rs 14,127 crores 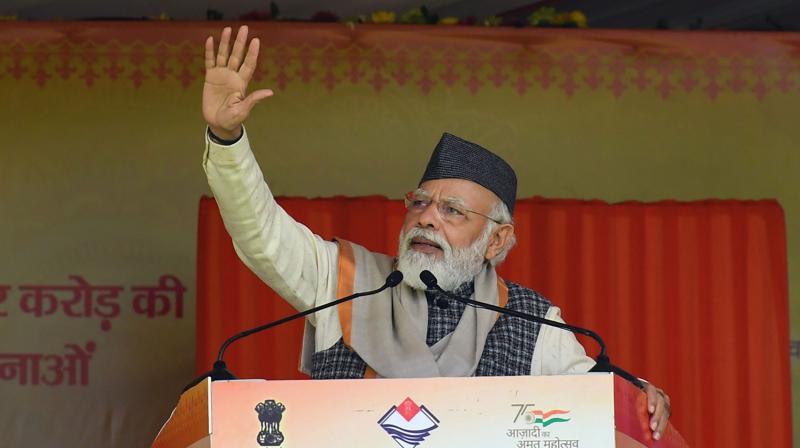 New Delhi: Accusing successive Congress governments in the border state of Uttarakhand of ignoring national security and “looting” the state, Prime Minister Narendra Modi on Thursday inaugurated and laid the foundation stones of projects worth over Rs 17,500 crores, including the Rs 5,747-crore multi-purpose Lakhwar project, which was pending for over four decades.

Mr Modi, who addressed a massive public rally in Haldwani, accused the Opposition of “spreading lies” against the BJP, which he said was “committed to develop the state”. This was Mr Modi’s second visit to the poll-bound state this month.

“Along with connectivity, every aspect of national security was ignored earlier; made our Army only wait for ‘One Rank, One Pension’, modern weapons, bulletproof jackets and even to give a strong answer to terrorists. They (previous governments) always insulted our Army… Uttarakhand has completed 20 years of its formation. In these years, you have also seen such people running the government who used to say ‘you may loot Uttarakhand, but save my government’. These people looted Uttarakhand with both hands,” said the PM at the gathering.

Saying the public now knows their (Opposition’s) truth, Mr Modi said: “These people have started a new business of rumours… manufacturing, spreading, and then screaming about it. These Uttarakhand rebels are spreading rumours about the Tanakpur-Bageshwar rail line as well.”

Accusing successive Congress governments at the Centre and in the state of dragging their feet for decades on development projects meant for the state’s people, forcing them to migrate from their villages, Mr Modi said: “Wasn’t it sinful on the part those who were in power before us to delay the project. Would you forget their sin?”

Mr Modi inaugurated six projects worth Rs 3,420 crores and laid the foundation stones of 17 others worth Rs 14,127 crores. The inaugurated projects include three different stretches of the Char Dham all-weather road, which have been widened, Nagina-Kashipur National Highway, Suring Gad hydel project and sewage works under the Namami Gange programme at Nainital. An AIIMS satellite centre for Kumaon worth Rs 500 crores, the Moradabad-Kashipur four-lane road, improved road connectivity with Nepal and an Aroma Park in Kashipur are among key projects whose foundation stones were laid by the PM.

The Lakhwar multi-purpose project will produce 300 MW of electricity. The 330 million cubic metres water in its reservoir will supply irrigation and drinking water to six states of Uttarakhand, Himachal Pradesh, Haryana, Uttar Pradesh, Rajasthan and Delhi.

On his last visit to Uttarakhand on December 4, Mr Modi had unveiled projects worth over Rs 18,000 crores in Dehradun, besides addressing an election rally.