'It was a courtesy visit': BJP contestant on meeting TMC leader on poll day

'The media has unnecessarily politicised it,' Anupam Hazra said. 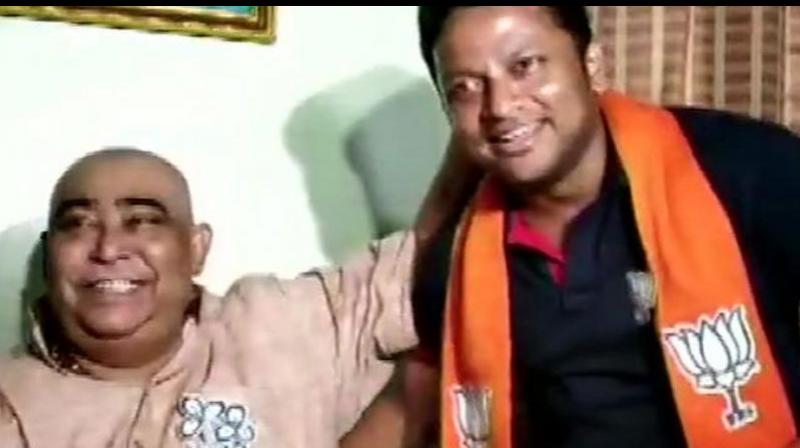 Hazra, who had switched over from Trinamool Congress in March after being expelled for anti-party activities, left the BJP red faced after he met senior TMC leader Anubrata Mondal fuelling speculation over his return to the party. (Photo: ANI)

Kolkata: Facing flak from within BJP for meeting a senior TMC leader, its candidate from the prestigious Jadavpur seat Anupam Hazra Tuesday blamed the media for politicising his "courtesy visit".

Hazra, who had switched over from Trinamool Congress in March after being expelled for anti-party activities, left the BJP red faced after he met senior TMC leader Anubrata Mondal fuelling speculation over his return to the party.

"I had met Anubrata Mandal in a courtesy visit yesterday. It has nothing to do with politics. His mother passed away few days ago so I went to meet him. What's wrong in it? The media has unnecessarily politicised it," he said at a press conference at the state BJP office with party leader Mukul Roy seated next to him.

Polling in Jadavpur seat will be held in the last phase on May 19. "One of the reasons why I quit TMC was my differences with Anubarata Mandal as his way of functioning was not acceptable to me," Hazra said refuting speculations that he might return to Mamata Banerjee's party after elections.

Roy came to his defence and said Hazra is a victim of "political conspiracy".

The BJP had on Monday sought explanation on the visit from Hazra, who had had won the 2014 Lok Sabha election from Bolpur seat in Birbhum district on a TMC ticket.

"Anubrata Mondal is the last word in Birbhum district. I came to offer condolences on the demise of his mother," Hazra had said on Monday and added that the TMC strongman as his "uncle".

Asked whether he will rejoin the TMC, he had said only time can tell that.

Mondal had said he had exchanged pleasantries with Hazra but did not wish him victory in the Jadavpur seat.

"If he (Hazra) accepts his mistake, he may come back to us (TMC). I can make him MP again. I can speak to (TMC supremo) Mamata Banerjee about it," he had said.

An angry BJP state president Dilip Ghosh had said he will talk to Hazra about it.

"He (Hazra) has said it was a courtesy visit. But it would have been better had he met Anubrata Mondal on some other day. In our party we have discipline and all of us have to maintain it," Ghosh had said.