‘Hyderabad people have decided to elect a BJP Mayor in GHMC’ 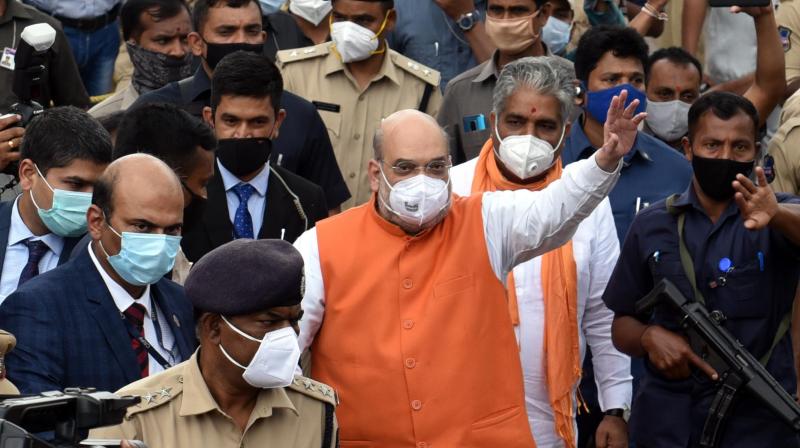 Union Minister for Home Amit Shah greets the BJP party workers and public during his visit to the Bhagya Laxmi temple at Charminar on Sunday. (DC Image: P.Surendra)

Hyderabad: Exuding complete confidence, buoyed by the hysterical crowds that gathered to greet and cheer him, Union minister of home affairs Amit Shah said, the Bharatiya Janata Party (BJP) will have its mayor in the Greater Hyderabad Municipal Corporation (GHMC) and the party will form the next state government in Telangana.

“The way people of Telangana have supported Modi ji during Lok Sabha polls, the beginning for change has begun. GHMC is the next stop,” Shah said during his roadshows.

Addressing a press conference at the party state headquarters, he said he was touched by the affection and love extended by citizens of Hyderabad, through their participation in such massive numbers at the rally and at road shows.

“Looking at the enthusiasm and support of citizens, I am very sure of a big victory,” Shah said, adding, “no election is small for us. Those who called the GHMC elections as gully elections are insulting people of Hyderabad. Every opportunity where people give a mandate is of highest importance to us. We are not contesting this election to increase vote or seat share, but to win the mayor's position.”

Refuting the allegation of Chief Minister K. Chandrashekar Rao that the BJP government at the centre was not giving enough funds to Hyderabad, especially after the floods, he said, “we have been giving but CM KCR has not been going to the Secretariat to work. If he goes to work, he will know what all we have given.”

Shah then outlined a host of fund disbursements made to Hyderabad, including over `500 crore support recently.

Amit Shah said TRS is responsible for the sinking of Hyderabad because of their appeasement policy towards MIM and allowing goons and mafia to illegally encroach waterfronts, lakes and nalas, leading to an unprecedented deluge.

“In the last five years, the TRS government could not clear nalas or remove encroachments. The BJP will ensure every single illegal occupation will be demolished. Hyderabad will never again face such floods,” Shah promised.

“The TRS-MIM combine cannot transform Hyderabad into a global city or make it the software hub of the world because they are incompetent and irresponsible. Only BJP has a track record to ensure Hyderabad transforms into a global IT hub and a microcosmic symbol of new India,” Shah said.

He pointedly asked CM Chandrasekhar Rao why he has not implemented Ayushman Bharat scheme, which provides `5 lakh health insurance to poor?

“Had KCR implemented the visionary flagship program of Prime Minister Modi, people would not have had to shell out huge amounts in corporate hospitals during Covid pandemic,” he said.

“In many of these programs, Hyderabad city and Telangana got maximum benefit. From modernization of passport issuance to extension of Metro rail projects, BJP has always kept interests of Hyderabad as a priority,” he said.

Amit Shah highlighted BJP’s goal to transform GHMC with the philosophy of moving from dynasty to democracy, from corruption to good governance, from secrecy to transparency.

He said, “Sardar Patel rescued Hyderabad and the region from a Nizam who wanted to join Pakistan. Hyderabad should transform into a modern global city and not be stuck with the nawabi and nizami times. Hyderabad can’t afford another Nizam.”

Dismissing the unfounded criticism that the BJP was practicing divisive politics, Shah said that wherever BJP governs, there are no communal riots.

On allegations by TRS leaders that no Central aid was given for relief work in Hyderabad when it was hit by heavy rains and floods, Shah said the Centre sanctioned and gave the maximum amount to Hyderabad. “Water entered houses of seven lakh people. Where was Asaduddin Owaisi or KCR? They were not to be seen. Our party workers and leaders were among people to help,” he said.

Shah appealed to all voters of GHMC to come on Election Day and vote in large numbers to elect a BJP mayor to transform Hyderabad into a modern, global city.