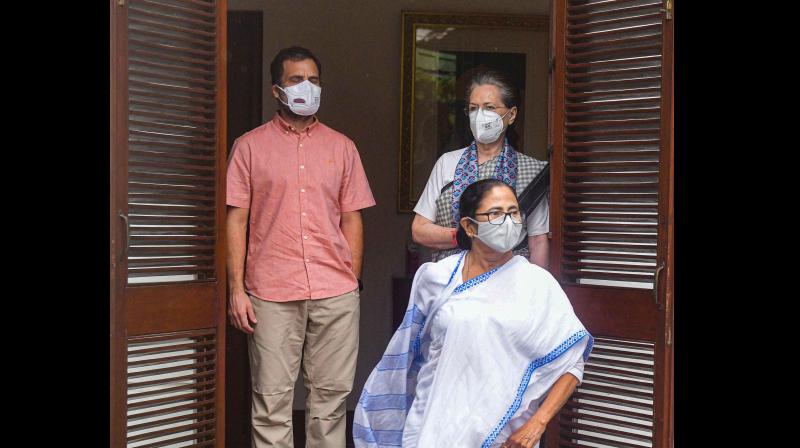 New Delhi: On the third day of her politically surcharged visit to the national capital, West Bengal chief minister Mamata Banerjee met several Opposition leaders and called on Congress president Sonia Gandhi at her 10 Janpath residence, where Congress leader Rahul Gandhi was also present. It was the TMC supremo’s first meeting with the Gandhis after her sweeping third term victory in the West Bengal elections, where the Congress had been decimated.

Speaking to reporters outside Mrs Gandhi’s house after the 45-minute meeting on Wednesday afternoon, Ms Banerjee said: “Soniaji invited me for a cup of tea and Rahulji was also there. We discussed Pegasus and the Covid-19 situation in the country. We also discussed the unity of the Opposition. It was a very good meeting, a positive meeting. To defeat the BJP, everybody needs to come together. Everyone will have to work together.”

The Congress and the TMC appear to be warming up to each other after the meeting, and Ms Banerjee also said a “positive result should come out of it” in the near future.

Asked by reporters if she would be the face of the Opposition to take on the BJP in the run-up to the 2024 general election, Ms Banerjee was non-committal. She said: “I am not a political astrologer. It depends on the situation, the structure. I have no problem if someone else leads. When the matter is discussed, we can decide. I cannot impose.”

The TMC supremo is being seen as a central figure after her sensational win in the West Bengal elections to ensure Opposition unity. She told the reporters: “Poore desh me khela hoga. It’s a continuous process… When the general election comes (2024), it will be Modi versus the country.”

On the leadership issue, she said: “I want to help all Opposition parties to bell the cat. I don’t want to be a leader, but a simple cadre.” Taking potshots at the BJP’s slogan, she said: “I want to see sachcha din, bahut achcha din dekh liya (I want to see truthful days, we have seen enough of the ‘good days’).” On the Pegasus controversy, she said: “The Centre should have taken a suo moto move to have a probe into the allegations. In a democracy, you need to respond. The situation is very bad, it’s worse than the Emergency.” She had met Prime Minister Narendra Modi on Tuesday and asked for a Supreme Court-monitored inquiry and an all-party meeting on the Pegasus issue.

On Tuesday, Ms Banerjee had met senior Congress leaders Kamal Nath, Anand Sharma and Abhishek “Manu” Singhvi. After meeting Mrs Gandhi on Wednesday, she met AAP chief and Delhi CM Arvind Kejriwal. They discussed the current political situation and the need for Opposition unity to take on the BJP.

Ms Banerjee also hinted that after the Parliament session there will be more “reach outs” to Opposition parties and there should be a common platform to work together. She had earlier said that she was open to an Opposition front, but any such grouping will be impossible without the Congress. The TMC chief will meet more Opposition leaders Thursday and leave for Kolkata on Friday.