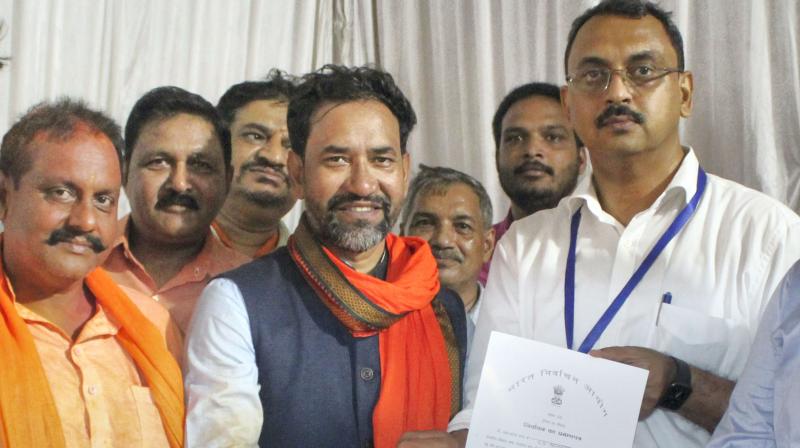 New Delhi: Continuing with its victory march in the politically crucial state of Uttar Pradesh, the BJP on Sunday managed to dent the Samjawadi Party’s core vote bank -- Muslim+Yadav (MY) -- in Azamgarh and while in Rampur it demolished the citadel of the SP’s popular Muslim face, Azam Khan, who was recently released from jail after the Supreme Court granted him interim bail. BJP’s Dinesh Lal Yadav “Nirahua” won the Azamgarh seat by defeating SP president Akhilesh Yadav’s cousin Dharmendra Yadav, while BJP candidate and former SP MLC Ghanshayam Singh Lodhi won Rampur by defeating SP candidate Asim Raza. Three Lok Sabha seats -- Azamgarh, Rampur and Sangrur in Punjab -- and seven Assembly seats, including four in Tripura and one each in Andhra Pradesh, Jharkhand and Delhi, held byelections on June 23.

In Delhi, the AAP retained the Rajinder Nagar seat, which fell vacant after party leader Raghav Chadha was elected to the Rajya Sabha.

The Azamgarh seat fell vacant after SP chief Akhilesh Yadav decided to retain the Assembly seat which he won during the recent Assembly polls, while the Rampur seat was vacated by Azam Khan to enter the state Assembly. The SP chief did not campaign for the bypolls.

Lauding the BJP’s performance in the bypolls, Prime Minister Narendra Modi said the party’s win in Azamgarh and Rampur was “historic” and asserted that it indicated wide acceptance and support for the “double engine” governments at the Centre and in Uttar Pradesh. Mr Modi, who is now in Germany, also thanked the people of Tripura for reposing faith in the party’s development agenda and voting its candidates, including chief minister Manik Saha, to victory in the Assembly bypolls through his tweets.

UP CM Yogi Adityanath attributed the BJP’s win to the people’s faith in the “double engine government” and their aversion towards “dynastic and casteist parties who incite communal tension”.

“Today’s victory has given this message very clearly in front of everyone that in 2024, the BJP is going to win 80 out of 80 seats in Uttar Pradesh … This (BJP’s performance) shows that people approve of the policy of ‘Sabka Saath, Sabka Vikas, Sabka Prayas and Sabka Vishwas’ of Prime Minister Narendra Modi and the BJP,” said the UP CM, who had campaigned in both Rampur and Azamgarh and had deputed senior leaders, including Cabinet ministers, for both seats.

The UP bypoll results are expected to influence the BJP’s performance in the 2024 Lok Sabha polls, as the state’s main opposition party, which is now facing dissidence after the drubbing in the recent Assembly polls, lost two of its key seats, including Azamgarh, which had been sending Yadavs to Parliament since early the 1960s. Rampur, which was seen as Azam Khan’s bastion since 2004, had so far sent three BJP candidates, including Dr Naipal Singh, during the “Modi wave” of 2014.

The SP’s poor performance also gave credence to rumours of a growing rift between the SP chief, who did not campaign for the polls, and Azam Khan, a prominent Muslim face of the party. Though Mr Khan alleged “misuse of official machinery” in the polls, speculation has been going on in UP politics that since the SP’s drubbing in the Assembly polls, that its core vote bank (M-Y) is no more intact as Rampur has around a 55 per cent Muslim vote bank and the Yadav-dominated party had been comfortably winning the Azamgarh seat since 2014. The parliamentary seat has been represented 11 times by Yadavs since 1962. The last BJP candidate Azamgarh sent to Parliament before this byelection had been in 2009.

The Mayawati-led BSP also had revenge of sorts in Azamgarh -- earlier represented by the SP chief -- as its candidate Guddu Jamali cut into the SP’s Muslim vote bank. The BSP did not field a candidate in Rampur, where the consolidation of the Lodhi, Kurmi and other OBC vote banks, along with dalits, in favour of the BJP along with its core vote bank, helped the party in bagging the SP’s seat.

In Sangrur, the ruling AAP was left embarrassed as the Lok Sabha seat was considered a stronghold of chief minister Bhagwant Singh Mann, who had to vacate it to enter the Assembly. The AAP also lost its only representative in the Lok Sabha.

Conceding defeat, the Punjab CM tweeted: “I humbly accept the verdict given by the people of Sangrur. I am working day and night with honesty for the progress and prosperity of Punjab and will continue to work harder … I am your son and will spare no effort to brighten the future of your families.” Sangrur was considered as an AAP bastion as the ruling party won all nine Assembly seats in the area. Just three months back, the AAP had bagged the state after getting a landslide victory. Akali Dal (Amritsar) president Simranjit Singh Mann, who lost in the Assembly polls in the state, won the Sangrur seat by defeating the AAP’s Gurmail Singh and recalled the death of Jarnail Singh Bhindranwale and others during Operation Blue Star at Amritsar’s Golden Temple in 1984, after winning the key seat. The bypoll in Punjab was held after the murder of popular singer Sidhu Moosewala, and law and order was one of the main poll planks of SAD(A). Compared to last two Lok Sabha polls, Sangrur saw a low turnout of 45.30 per cent, against 72.44 per cent in 2019 and 76.71 in 2014. The SAD(A) win was also seen by many as support for  hard-line “panthic” politics in the area, which was blamed for the rise of militancy in the state during the late 1980s.

“Arvind Kejriwal had Punjab CM Bhagwant Mann hanging out of his SUV while he waived at curious onlookers during the Sangrur campaign. Today, the AAP has lost that seat, despite a massive mandate just 3 months ago. The new MP, an ex-IPS officer, is an apologist for the secessionists,” tweeted the BJP’s Amit Malviya.

Of four Assembly seats in Tripura, three were won by the ruling BJP, including the maiden election of its new CM, Manik Saha, from Town Bordowali seat. The Congress won just one seat. The TMC and the Left parties failed to open their account in the north-eastern state.