'I respect saffron but does Thakur respect hijab? If Thakur respects hijab then she must apologise to the Muslim community,' Siddique said. 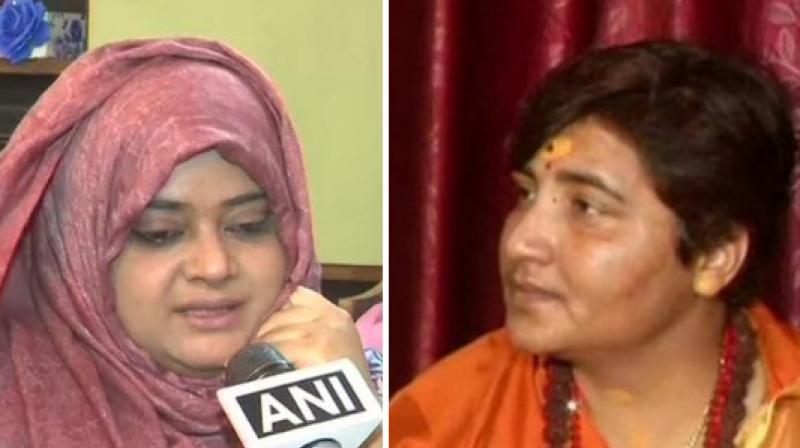 Fatima Siddique said that she would campaign for Malegaon blast accused and her party candidate from Bhopal Sadhvi Pragya if she apologizes to Muslims for her remarks. (Photo: ANI)

Bhopal: BJP leader Fatima Rasool Siddique said that she would campaign for Malegaon blast accused and her party candidate from Bhopal Sadhvi Pragya Singh Thakur if she apologizes to Muslims for her recent statements.

"I respect saffron but does Thakur respect hijab? If Thakur respects hijab then she must apologise to the Muslim community and then I will surely campaign for her," Siddique said. Last week, Thakur had said that she is "proud" to accept that she was involved in the demolition of the Babri Masjid in Ayodhya on December 6, 1992.

Expressing discontentment over the controversial statements delivered by Thakur, Siddique said: "What Thakur has said was obnoxious and communal and her views can tarnish the image of the party. I will not campaign for someone who says a thing like waging a `dharm yudh’ (crusade). Her statement against former Maharashtra Anti-Terrorism Squad (ATS) chief Hemant Karkare has hurt us badly. Shivraj Singh Chouhan has a good reputation among Muslims. He is known for his strong views on Ganga-Jamuna Tehzeeb but her views might damage that too."

"There are several cases registered against her. Rather than giving statements against Karkare ji, we should focus on the development of Ganga and Yamuna rivers. Vande Mataram is not a matter of development, Thakur should apologize for this," she said.

"Nowadays, people have become wiser, they are not in favour of dividing Hindu and Muslims. A lot of Muslims are associated with the BJP, they have also been hurt. No one has raised voice against Thakur but I have raised my voice. The party will suffer and this will harm all of us. I have given my message and filed a complaint against it with the party," she added.

Last year in November, Siddiqui had joined the BJP and later she was nominated as the party’s candidate from the Bhopal North assembly constituency. She was the lone Muslim woman candidate fielded by BJP in Madhya Pradesh. However, she lost to Congress candidate Arif Aqueel.