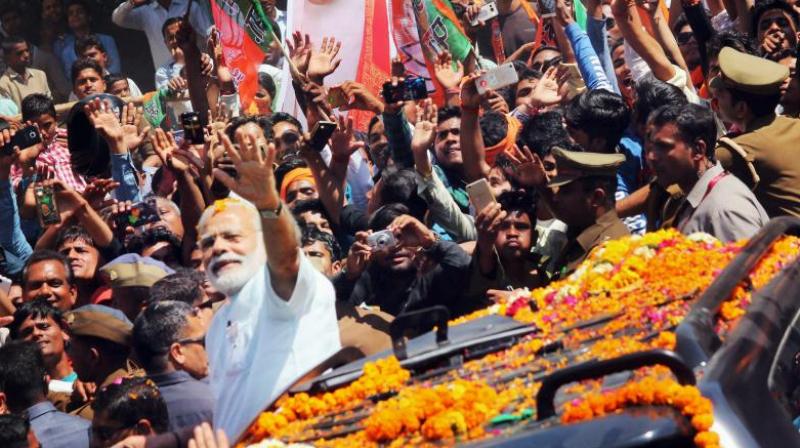 Guwahati: With victory on 33 seats, the ruling BJP on Friday crossed over the halfway marks in 60-member Arunachal Pradesh assembly while its rival opposition Congress could bag only four seats so far in the result declared for 55 constituencies. Counting of votes is still underway for five assembly constituencies in the state.

Arunachal Pradesh chief minister Pema Khandu, also won the election from the Mukto seat, bordering China, for the third time in a row, while his deputy Chowna Mein bagged the Chowkham constituency.

It was for the first time when saffron party would be forming the government with legislators contesting the polls on its symbol and acquiring the majority.

The saffron party has clinched 37 Assembly seats, including three unopposed, and is currently taking a lead in two constituencies.

While power minister and BJP candidate Tamiyo Taga tasted defeat at the hands of newcomer Talem Taboh of the JD (U) in Rumgong, Assembly Speaker Tenzing Norbu Thongdok, who represented the Kalaktang constituency for two terms, failed to wrest the seat from JD (U) greenhorn Dorjee Wangdi Kharma.

State Home Minister Kumar Waii, who quit the BJP to join the NPP, lost the Bameng assembly seat to Gorduk Pordung of the saffron party.

The Congress has retained four of the 42 seats it had won in 2014 - Sagalee seat, Mebo, Borduria-Bogapani - while wresting Pasighat West from the BJP.

Deori is the daughter-in-law of former Rajya Sabha MP from the state, Omem Moyong Deori.

In an interesting development, the Janata Dal (United) which had fielded candidates on more than 10 seats got seven seats and National Peoples’ Party (NPP) a new entrant after election dates were declared, got four seats. However, these candidates are stated to be dummy candidate of top BJP leaders who failed to get ticket for them in the party.

In the 2014 Assembly elections, the Congress had won 42 seats, BJP 11, PPA five and two Independents won one seat each.

In what has doubled the pain of the family members and his supporters, the NPP legislator and candidate from Khonsa West seat Tirong Aboh who was killed in an ambush of suspected NSCN-IM militants won the seat by a margin of 1055 votes by defeating BJP candidate Phawang Lowang. (EOM)