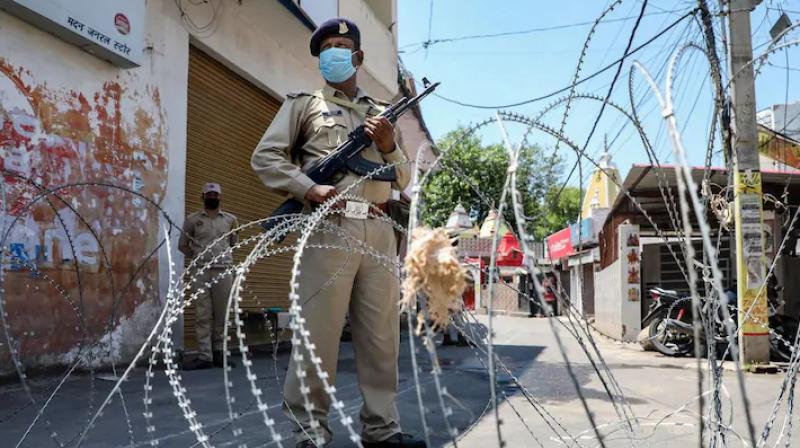 DGP Singh said that the recent target killings in the Valley in which seven Hindus and a Sikh woman also lost their lives were apart from disrupting peace aimed at triggering a communal split in J&K. — Representational image/PTI

SRINAGAR:  Jammu and Kashmir Lieutenant Governor, Manoj Sinha, and Director General of Police, Dilbag Singh, on Thursday vowed to root out terrorism and militancy from the Union Territory (UT), asserting those involved in the recent target killings in and outside capital Srinagar ‘will have to pay a heavy price’ for committing such ‘inhuman acts’.

Sinha while speaking at a police commemoration day function near here also said that those trying to disrupt peace in J&K will be given a ‘befitting reply’. He said, “Those involved in the killing of innocent civilians and members of minority communities will have to pay the heavy price for their inhuman acts. The security forces together with the civil administration won’t rest till militancy and terrorism are eradicated from the J&K soil. We won’t allow anyone to damage the age-old communal fabric of J&K.”

He added, “If someone tries to disrupt the peace in J&K, they will be dealt with sternly and there will be a befitting reply from our side.” He said that the J&K police and various central armed police and paramilitary forces and the Army are doing a commendable job in keeping the peace intact.

“Be it fighting Covid pandemic, implementing Covid appropriate behaviour, maintaining law and order or fighting terrorism, the J&K police are on the forefront. It is not popular in the UT only but in the entire country for its capabilities and responsibilities,” he asserted adding “If there is a second name of J&K police, that is the responsibility.”

Sinha appealed to the civil society and other prominent citizens of J&K to raise voice against civilian killings in the Valley as he believed their condemning the “heinous and inhuman” killings of civilians in one voice would help the administration, the police and other security forces to expedite their operations against militants.

Reiterating that the outside forces were trying to disrupt the peaceful atmosphere in J&K with a view to upset the developmental process, he said, “They need to know that India is capable of giving them a befitting reply as well. If anyone tries to disrupt the peace, they will face the music.”

Earlier DGP Singh said that the recent target killings in the Valley in which seven Hindus and a Sikh woman also lost their lives were apart from disrupting peace aimed at triggering a communal split in J&K. “But I assure the people today that the J&K police and various other security forces will together foil all such nefarious plans and never allow terrorists to succeed.”

He alleged that the militants were carrying out such gory acts and other terror activities at the behest of their mentors sitting across the Line of Control (LoC). He claimed that the recent civil killings in the Valley were carried out not only to disturb peace and drive a wedge between majority Muslim community and minorities but also to snatch the livelihood of the common masses by disrupting tourism and other businesses “but we have given a befitting reply to the enemies of peace and will continue to do it.”