Dignity and welfare of people first, politics last for us: NC

They exuded confidence that the party would surmount the present challenge as well. 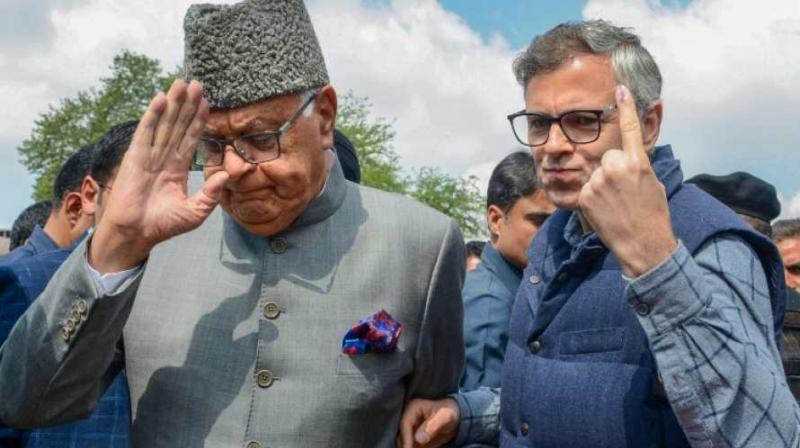 The National Conference (NC) asserted on Monday that time alone would prove its efficacy and relevance in Jammu and Kashmir's politics, adding that the "dignity and welfare of people comes first for the party and not politics". (Photo: File)

Jammu: The National Conference (NC) asserted on Monday that time alone would prove its efficacy and relevance in Jammu and Kashmir's politics, adding that the "dignity and welfare of people comes first for the party and not politics".

"We do not need any certificate from the BJP about our relevance in the state's politics," senior NC leaders said in a joint statement, while reacting to the observations of BJP leaders about the significance of detained party president Farooq Abdullah and vice president Omar Abdullah in Jammu and Kashmir's politics.

"There seems to be inherent contradictions between the government and the BJP leadership. While the central government is maintaining that mainstream political leaders have been detained to prevent them from mobilising people against the political decisions taken in the recent past, thereby creating breach of peace, on the other hand, BJP leaders are saying mainstream political parties are irrelevant in Jammu and Kashmir," the statement said.

"If they are irrelevant, why don't you release them?" the NC leaders asked, advising the ruling Bharatiya Janata Party (BJP) to shun the "NC phobia" and instead, reach out to people and work towards restoration of peace and democracy in the state.

Jammu and Kashmir was passing through the most difficult times and the BJP must come up with a clear roadmap to deal with the situation, instead of indulging in rhetoric, the statement said, adding that spreading canards about the NC leadership would not work and the saffron party should try to provide succour to people.

The NC leaders cautioned against defaming the political leadership of Jammu and Kashmir, which had withstood the test of time and surmounted challenges during most difficult times with courage and fortitude in the larger interest of the people of the region.

"The National Conference is the only cadre-based political party with its huge presence visible from Lakhanpur in Jammu to Turtuk in Ladakh and from Tangdhar in Kashmir to Padder in the Jammu region," the statement said, adding that the party under the leadership of Farooq and Omar Abdullah had weathered all the political storms in different manifestation from time to time.

They exuded confidence that the party would surmount the present challenge as well. They said Farooq and Omar Abdullah, the two former chief ministers, were credited with chequered political careers spanning decades with an unblemished record of public service, strengthening of communal harmony, working towards peace and steering the state to development and progress.

The nation understood and acknowledged the contribution and relevance of Farooq and Omar Abdullah in Jammu and Kashmir's polity and the esteem they enjoyed in the hearts of their people, the NC leaders said and advised BJP leaders to shun their "myopic political vision" and "hate" for the NC leadership.