Sources indicated that there was a possibility that the talks may continue on Tuesday, but this was not officially confirmed 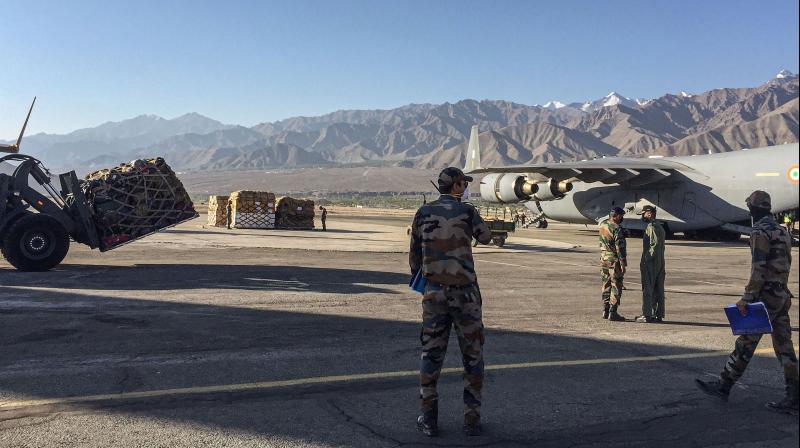 An IAF transport aircraft C17 brings in essentials supplies at a base in Ladakh. — PTI photo

The Indian and Chinese corps commanders held marathon talks all through Monday in a bid to try and resolve the four-month-long standoff in eastern Ladakh. Officials confirmed that the talks were continuing till late in the night, even after 13 hours of tough negotiations.

Sources indicated that there was a possibility that the talks may continue on Tuesday, but this was not officially confirmed.

India has asked for complete disengagement from all points in eastern Ladakh, where China has transgressed into Indian territory, including at Pangong Tso and Gogra Post-Hot Springs. The Chinese PLA has also prevented Indian soldiers from patrolling the Depsang sector. India made it clear that since it was China which had first transgressed, it will have to make the first move towards disengagement. In all earlier meetings, China has refused to disengage from the Pangong lake and Gogra Post. India wants restoration of the status quo ante of April 2020 all across eastern Ladakh.

Meetings between the Indian and Chinese militaries tend to be lengthy as the discussions need to be translated from English to Chinese, and then again from Chinese to English.

The meeting started around 9.30 am at Moldo on the Chinese side of the Line of Actual Control near Pangong Tso’s southern bank, where shots were fired for the first time in 45 years.

The Indian delegation was led by the commander of 14 Corps, Lt. Gen. Harinder Singh.  Lt. Gen. P.G.K. Menon, who is likely to replace Lt. Gen. Singh next month, was also present. For the first time, a representative of the external affairs ministry, joint secretary (East Asia) Naveen Srivastava, also took part. The presence of a MEA representative was to signal that India was serious about resolving the standoff with China through discussion and negotiations.

For the Chinese side, the main concern is that India should vacate the strategic heights it occupied on the Kailash range, which overlook the entry points of Spanggur Gap in Chushul sector, during the pre-emptive action on August 29-31. The PLA commanders are under pressure from Beijing over their failure to stop the Indian Army from occupying these strategic heights.

The fifth and last corps commanders meeting had been held on August 2, also in Moldo. But things have changed a lot since then, with at least three instances of firing reported at the LAC for the first time in 45 years.