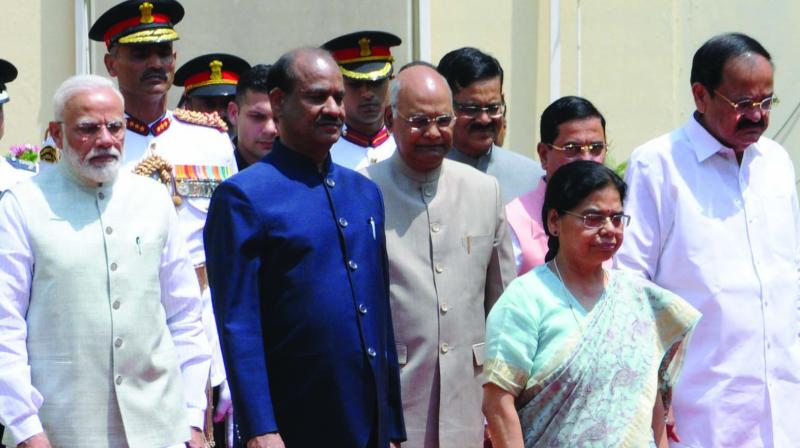 New Delhi: A day after Prime Minister Narendra Modi’s meet on “One Nation, One Election”, President Ram Nath Kovind said on Thursday that simultaneous elections are the “need of the hour” and repeated the NDA government’s promise that “campaign against black money will be carried forward at a faster pace”.

Sharing the government’s five-year roadmap in his address to the joint session of Parliament, the President said that people have given a “clear mandate” to accelerate the country’s development journey that started in 2014.

Asserting that the government is moving ahead to create a “strong, secure and inclusive” India, Mr Kovind touched upon surgical strikes and air strikes on Pakistan-based terror camps.

Speaking about India’s spiritual and scientific approach, he said that Kumbh has emerged the biggest holy festival across the globe and India is also ready to reach at moon with its Chandrayaan-2.

Reflecting the Modi government’s desire to hold parliamentary and Assembly polls simultaneously, Mr Kovind said that due to frequent polls in some part of the country or the other, the pace and continuity of development programmes has been impacted.

“Therefore, I urge all members of Parliament to seriously ponder over this development-oriented proposal of ‘one nation, simultaneous elections’,” he said.

Mr Kovind also underlined the government’s resolve to remove “social evils” of triple talaq and nikah halala to ensure equal rights for women, take forward the campaign against black money at a faster pace and make the zero tolerance policy against corruption more comprehensive and effective.

On issues relating to economy, the President said the government will soon announce a new industrial policy aimed at promoting growth and creating jobs.

With the Prime Minister, vice-president M. Venkaiah Naidu and MPs of both Houses in attendance in the Central Hall of Parliament for the joint sitting after the formation of the 17th Lok Sabha, the President said the just-concluded Lok Sabha elections have enhanced the credibility of Indian democracy as a record number of people — 61 crore — voted in them, including the highest share of women.

“My government is giving residential, health facilities to poor as poverty can be removed only by empowering them,” he said, speaking on behalf of Mr Modi.

“The people of the country have given a very clear mandate in this election (2019 Lok Sabha polls). After assessing the performance of the government during its first tenure, people have given even stronger mandate for the second term. By doing so, they have given a mandate for continuing uninterrupted and at an accelerated pace the journey of development which started in 2014, he said.

To fulfil its resolution of building a “New India”, the government in a short period of 21 days has taken many decisions aimed at welfare of farmers, soldiers, students, entrepreneurs, women and other sections of society and has also started implementing them, Mr Kovind said, adding initiatives have been taken to enact several new laws.

He spoke about the decision to start pension schemes for farmers and small traders, and extending the scheme to give Rs 6,000 input subsidy to all farmers.

Noting that a strong national economy can be built only on the foundation of a strong rural economy, he said an investment of Rs 25 lakh crore will be made in the coming years in order to enhance agriculture productivity.

To double income of farmers by 2022, when India will complete its 75 years of Independence, several steps have been taken in the last five years, the President said.