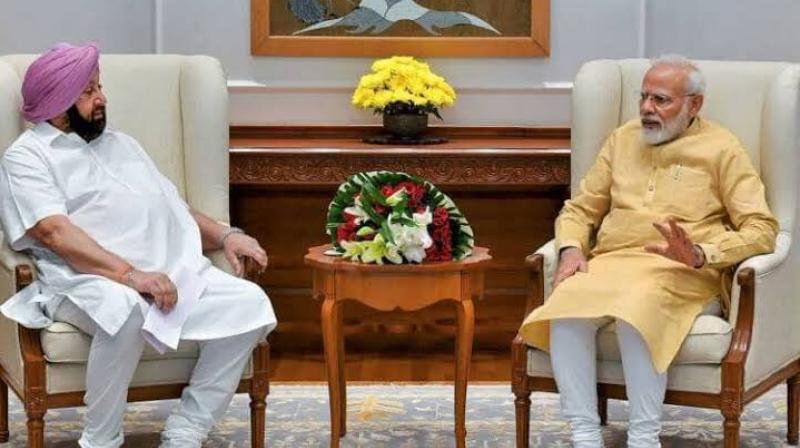 Chandigarh/ New Delhi: Former Punjab chief minister Amarinder Singh on Tuesday said he would soon announce his own political party and is hopeful of a seat arrangement with the BJP if the farmers' issue is resolved in their interest.

Singh resigned as chief minister of Punjab last month after a bitter feud with Congress leader Navjot Singh Sidhu and infighting in the state unit. The party replaced him with Charanjit Singh Channi.

"The battle for Punjab's future is on. Will soon announce the launch of my own political party to serve the interests of Punjab and its people, including our farmers who've been fighting for their survival for over a year," Singh said Tuesday.

The two-time chief minister also said he will not rest until he secures the future of "my people and my state".

"Punjab needs political stability and protection from internal and external threats. I promise my people I will do what it takes to ensure its peace and security, which is today at stake," he was quoted as saying by his media adviser in a tweet.

"Hopeful of a seat arrangement with BJP in 2022 Punjab Assembly polls if farmers protest is resolved in farmers' interest. Also looking at alliance with like-minded parties such as breakaway Akali groups, particularly Dhindsa and Brahmpura factions," Singh, who had faced an unceremonious exit from the state government last month, said.

Hundreds of farmers, mostly from Punjab, Haryana and Uttar Pradesh, have been camping at the Delhi borders since November 26 last year, demanding the repeal of three farm laws, enacted in September last year.

The Akali factions mentioned by Singh are of Sukhdev Singh Dhindsa and Ranjit Singh Brahmpura, who were expelled from Sukhbir Singh Badal-led Shiromani Akali Dal (SAD) earlier for revolting against its leadership.

Dhindsa then had formed the Shiromani Akali Dal (Democratic) while Brahmpura had floated the SAD (Taksali).

Later, both the leaders formed the SAD (Sanyukt) after the dissolution of SAD (Taksali) and the SAD (Democratic).

After resigning from the post of chief minister, Singh had said that he felt "humiliated".

Singh had also dubbed state Congress chief Sidhu "anti-national" and "dangerous" and said he would pit a strong candidate against Sidhu in the upcoming assembly polls.

Singh had last month met Union Home Minister Amit Shah in Delhi and had discussed the prolonged farmers' stir with him while urging him to resolve the crisis urgently with the repeal of the three farm laws.

"I will not join BJP (but) I will not stay in the Congress party," the 79-year-old leader had then said, adding that he had been "utterly humiliated" and was not trusted.