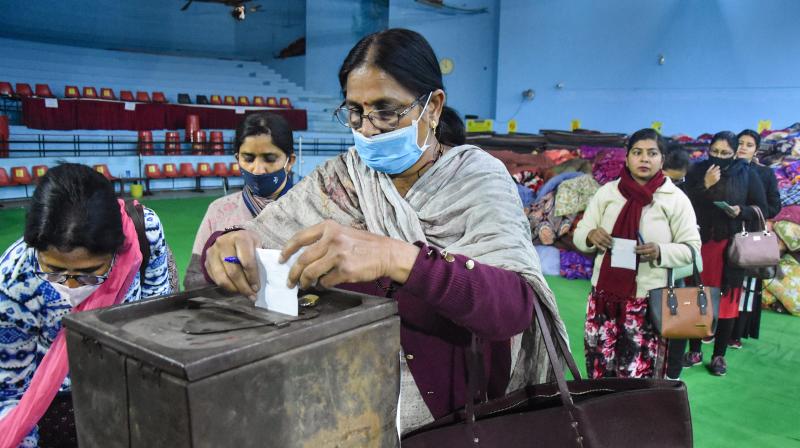 New Delhi: The border state of Punjab with its 117 Assembly constituencies along with Uttar Pradesh’s 59 constituencies spread across 16 districts will go to the polls today. In Punjab, which was the epicentre of farmer unions' protests against the now-repealed farm laws, the ruling Congress, AAP, SAD and BJP-led alliance are caught in a multi-cornered contest, while in UP the ruling BJP is slogging it out with its main contender and Yadav dominated Samajwadi Party (SP), which is giving the saffron party a tough fight.

Out of the 59 seats that will go to polls in the third phase in UP, 29 seats fall in the traditional Yadav belt, including Karhal from where SP chief Akhilesh Yadav is contesting. The BJP has fielded Union minister S.P.S. Baghel against him.

A day polling in Punjab, the state’s chief electoral officer (CEO) Saturday directed the district election officer-cum-district commissioner of Mohali and the SSP to register an FIR against AAP chief Arvind Kejriwal and his party for violating the Model Code of Conduct and for “making false and frivolous allegations against other political parties.”

The direction was given on the complaint of Arshdeep Singh Kler, vice-president and spokesman of Shiromani Akali Dal (SAD). The complainant raised objection to a video uploaded on social media platforms by AAP Punjab. He alleged that the video maligned the image of SAD and other political parties in the eyes of the general public. The video in question is a song, Es vaar jhaadu challooga, which shows the photographs of the CM, Captain Singh and Sukhbir Singh Badal and uses derogatory words for them.

In Punjab, the ruling Congress has been under severe criticism from its political opponents over various issues, including the drug menace and corruption. Security in the border state is also one of the main poll planks of the Opposition parties. Though some opinion polls seem to be suggesting that the Congress may not retain power, the party is banking heavily on decisions like reduction in electricity tariff and fuel prices.

The AAP, which has emerged as a major contender, is eyeing to wrest power while projecting the Delhi model of governance. But allegations of the AAP getting support of banned outfits like Sikhs For Justice and the concerns raised by the AAP’s opponent that if it comes to power the state could turn back to insurgency of the 90’s, could dent its prospects as SFJ has been advocating for secession of Punjab from India.

For SAD, which is contesting the polls in alliance with the Bahujan Samaj Party (BSP) after breaking ties with the BJP in 2020 over the farm laws issue, the stakes are also high.

Political parties have promised freebies to voters with the SAD-BSP promising 400 units of free electricity and 75 per cent reservation for the state youth in public and private sectors. The BJP-led alliance has made a similar promise, but for the government sector only, and the AAP has promised up to 300 units of free power.

The BJP has been reaching out to the state through PM Narendra Modi and some of the decisions taken by his government recently. The PM himself held three rallies at Jalandhar, Pathankot and Abohar, covering Punjab’s Doaba, Majha and Malwa regions where he accused the Congress and AAP of pretending to fight against each other. On the other hand, Congress’ Rahul Gandhi cautioned people against going for any “experiment” in Punjab polls, saying that maintaining peace was most important for the state and claimed it is only the Congress which can provide it.

In the 2017 Punjab Assembly polls, the Congress had ended the SAD-BJP combine’s 10-year-regime by bagging 77 seats. The AAP had bagged 20 seats while the SAD-BJP had won 18 seats.